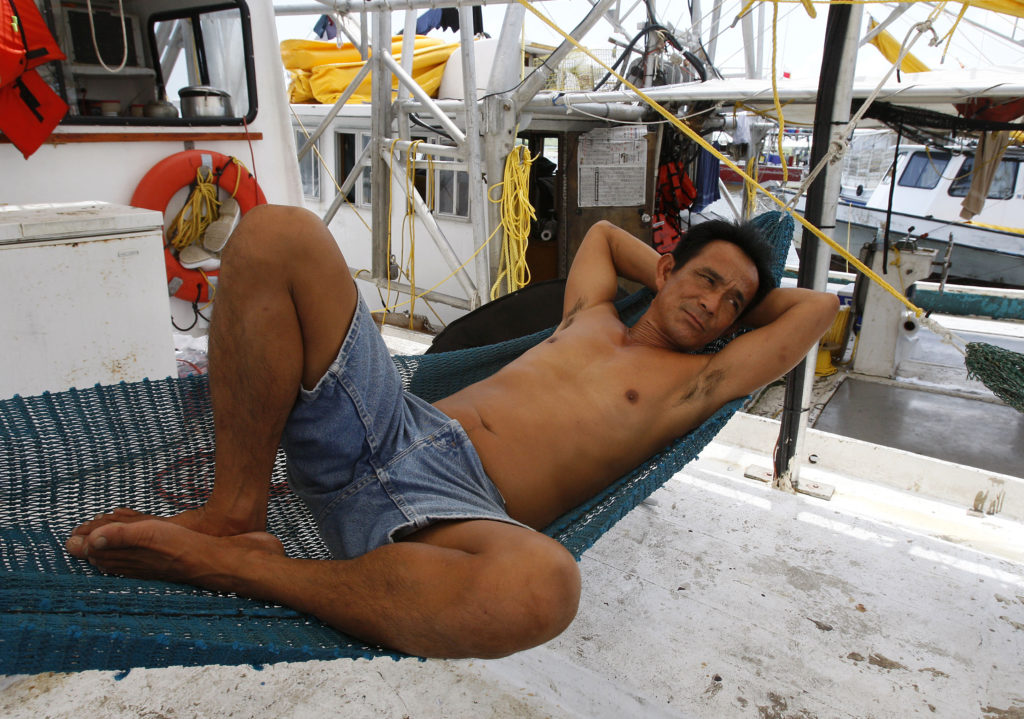 Deckhand Sang Nguyen swings in a hammock made from fishing net Thursday on the deck of a commercial fishing vessel while on standby with the vessels of opportunity program in Empire, La. As less heavy oil is found on the surface of the Gulf of Mexico and commercial fishing waters remain closed, local fishermen who signed up for the program are becoming worried about their futures as they wait dockside for a call to assist in spill cleanup efforts.

New Orleans ? Even when the oily sheen starts fading from the surface of the Gulf of Mexico, it manages to become bad news for fishermen.

Many of those whose fisheries were shut down by the oil spill have found work skimming oil, putting out boom or ferrying cleanup supplies through BP’s Vessels of Opportunity program. But as the crude sinks, evaporates or breaks down, they may be left with nothing to do but wait for their claim checks to arrive and for their fishing grounds to reopen.

No one knows how much longer BP plans to keep them working, and some fishermen, like Freddy Creppel, have been waiting for weeks to get a call.

“It was good work. I was making something,” said the Buras shrimper and fisherman, who joined the program and got 17 days of work using his boat to help guide workers to oiled birds stuck in the slick.

Plaquemines Parish President Billy Nungesser said it’s clear the cleanup effort is being scaled back even though oil is still showing up on the coast.

He said his biggest fear is that BP and the federal government “are going to start pulling back. They say they are not but already they have canceled catering contracts, they’ve stopped production of boom at factories.”

The gusher set off by an April 20 oil-rig explosion spewed between 94 million gallons and 184 million gallons into the Gulf before a temporary cap stopped the flow July 15. A permanent fix is expected to be weeks away.

Retired Coast Guard Adm. Thad Allen, the government’s oil-spill response chief, said that once the oil is stopped for good, the cleanup effort may start ratcheting down. The work has involved 11 million feet of boom, 811 oil skimmers and 40,000 people.

There were 1,584 Vessels of Opportunity in use as of Thursday, according to the Deepwater Horizon Unified Incident Command Web site. Thousands more vessels than that are under contract with the program, nearly 3,500 in Louisiana alone.

BP said in a news release Thursday that it has stopped accepting new vessels in the program but will continue to use vessels now in the program. Allen told reporters authorities are looking at using some of the vessels to put out sensors to monitor oil as boom and response equipment is removed. He said they are trying to figure out the size of the force they need long-term.

The vast majority of fishing grounds in the northern Gulf are closed because of the spill, though some in state waters have been reopened to recreational fishermen. Federal regulators have not said when fishing may open in federal waters, which span areas a few miles offshore.

Rusty Gaude, a fishery agent with the Louisiana Sea Grant, an extension of the Louisiana State University, said it is likely commercial fishing in federal and state waters will reopen soon. He added that no oil contamination has been found in state and federal seafood samples.

Allen had what he called a frank and open discussion with Louisiana Gov. Bobby Jindal and coastal parish officials concerned that the Coast Guard and BP PLC will pull back from the spill response once the oil is stopped permanently.

“One of the things we absolutely wanted to get today was their commitment that they’re in it for the long-term,” added Gov. Jindal. “Look, all those (federal) people in the room, with no disrespect … they’re going to be rotated out to different jobs. Everybody here is still going to be here dealing with this oil whether it’s a year from now or years from now.”

Nungesser said reports that oil has been disappearing from the surface have been exaggerated.

“Yesterday there was a flight where no oil was seen. I don’t know how they took that flight, but they must have bobbed and weaved around the oil because in Plaquemines Parish there is oil all over,” he said.

Allen said federal, state and local officials will come up with a plan by next week for how to clean up any oil that might continue washing up on beaches and in wetlands.

BP said incoming CEO Bob Dudley will be in Biloxi, Miss., this morning to outline the company’s long-term plans and announce that it will be getting help from James Lee Witt, former head of the Federal Emergency Management Agency during the Clinton administration.

Little of the oil remains on the water, but that doesn’t mean it has all vanished. Scientists are worried that much of it has been trapped below the surface after more than 770,000 gallons of chemical dispersant were used to break up the oil a mile deep. They have found evidence of massive clouds of oil suspended in the water.