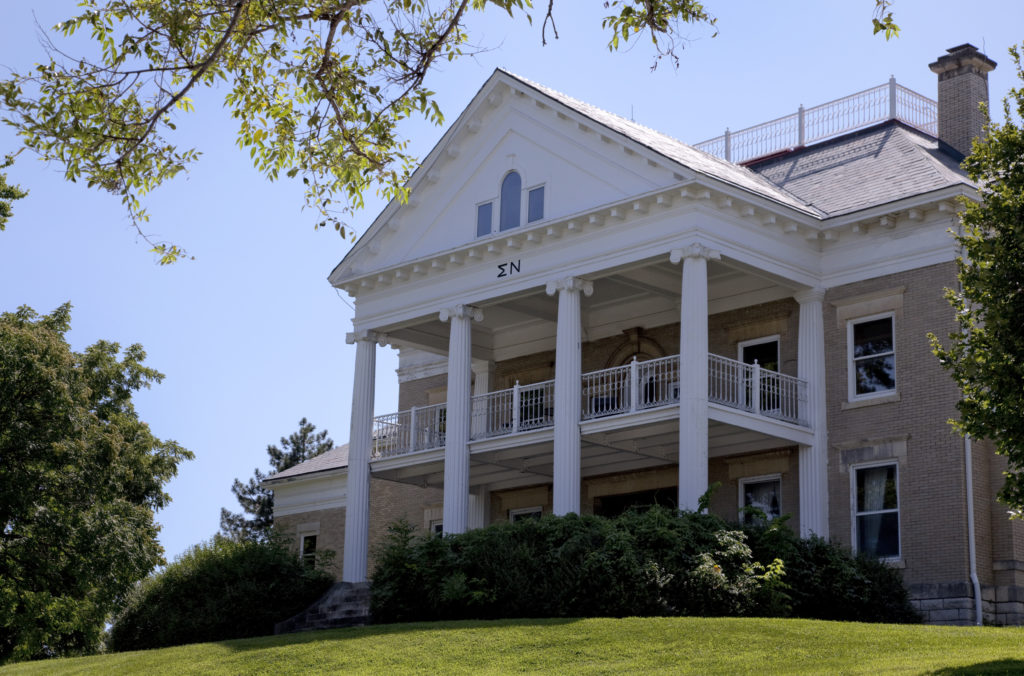 Sigma Nu fraternity house, at1501 Sigma Nu Place, was the site of a paranormal investigation Saturday and early Sunday morning. Members of Elite Paranormal of Kansas City searched overnight for clues about the house’s past.

The wood floors inside creaked and groaned with the slightest shift in weight.

For the second time in as many years, members of Elite Paranormal of Kansas City searched the house’s various levels for the best place to set up their investigation.

At this time last year, the team was making its first rounds through the building, searching for clues as to why the house was rumored to be haunted.

This weekend, they wanted to search for more evidence that could be researched and possibly verified.

So about midnight Saturday, 12 people sat around a wooden table in Room 201, the same room the team had conducted its main investigation in a year earlier. After cutting the lights, the 12 members sat in near silence — speaking only in hushed tones and whispers — listening to what an untrained ear might perceive as static.

But to the trained ear, the static holds clues — and possibly conversations with those on the other side.

Saturday night into early Sunday morning, that conversation was with a woman named Stella, the wife of former Gov. Walter Stubbs, who lived in the house before the fraternity moved in. Stubbs was governor from 1909 to 1913.

After about 30 minutes spent gathered in the second-floor room, the investigators emerged with what they believed to be solid ideas about what may have happened in the house.

“When we left the first time, it didn’t feel like we had finished the story,” Elite Paranormal case manager Bill Joeckel said. “We kind of left it in limbo.”

The story the investigators arrived at one year ago was that of Virginia, a mistress of the former governor, hanged herself in the house in 1911. Joeckel said his team had believed the former governor’s wife, Stella, had something to do with the incident.

Nearing the completion of the second investigation, however, Joeckel said he wasn’t so sure the former governor’s wife was responsible.

“We came in here hoping to find information we can back up with facts, like names, reasons and motives,” Joeckel said.

The investigators Sunday morning believed they had found some of that information.

Sally Nixon, the fraternity’s house mom for the past year, took the investigation in stride. Nixon tagged along with the investigators throughout the day Saturday and on into the night, interested to see what might be discovered. When the activity in the house ended in the early-morning hours, Nixon said she had become less interested in going to sleep.

“I’m not going to be too happy when they all leave,” she said.

Nixon, a 15-year Lawrence resident, said she’d often heard things going bump in the night in the old house. She said she could never be quite sure exactly what was responsible for the noise, though.

So what’s next in the process for Joeckel and his investigative team?

Each member will spend the next five days reviewing the data before sending the information to Joeckel and Elite Paranormal founding member Rob Garcia. Those two will review and research the information and develop a theory for what might have happened.

“When we go out we want to learn something,” Joeckel said of the investigation process. “We also want to try to solve whatever mystery we’re investigating.”

Elite Paranormal of Kansas City operates free of charge to its clients.

Garcia said he’d had several people through the years ask if his affinity for the paranormal was drug-induced, though he said many times it seemed to be the other way around based on some of the people who’d called them for an investigation.

Garcia, an IT professional and father of two by day, said paranormal investigation was a hobby like any other, and one he enjoyed.

Garcia said the results from the weekend’s investigation will most likely not be available for a couple of weeks.