Meet the dean: Head of KU’s School of Music tackles challenges of reorganization 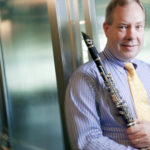 In this file photo, Robert Walzel, dean of Kansas University’s School of Music, is pictured in Murphy Hall, KU campus.

Robert Walzel first got a taste of Lawrence as a junior high school student. The Texas native attended the Midwestern Music and Art Camp in the early 1970s in hopes of honing his clarinet skills.

“It was sort of my first time as a teenager to be away from home for an extended amount of time,” Walzel recalls. “It was an incredible musical experience, and I made friends who I still stay in contact with.”

Now, 35 years since he last stepped foot in Lawrence, Walzel is back. Only this time he returns as the dean of Kansas University’s new School of Music.

“It was sort of a eureka moment, seeing Lawrence again,” says Walzel, who previously held the position of director at the University of Utah’s School of Music.

“I really wasn’t looking to leave Utah, but KU has a great reputation. And it’s a place that I’ve always held a fascination for after discovering it years ago.”

Walzel becomes the first official dean of the school, which has been the centerpiece of a reorganization by KU’s administration that began two years ago.

As part of the plan, a School of Music was formed in July of 2009 from what was formerly the Department of Music and Dance. A new School of the Arts absorbed dance, as well as existing art and sculpture programs that all resided in the College of Liberal Arts & Sciences. This also houses the Departments of Art, Theatre and Film.

The former School of the Fine Arts was dissolved, sending programs such as industrial design, visual communication and photomedia to the School of Architecture and Urban Planning.

“If you look at all the best music schools in the country, almost all of them are under a structure like they created here where there’s a dean who reports to a provost or executive vice president, and the school functions under its own governance,” he says.

“It’s absolutely the best administrative setup for music and for the other arts as well. It’s going to promote success.”

Prior to his career as a music administrator, Walzel was singularly focused on one goal: being a musician.

After earning his undergrad degree and a master’s in music from the University of Houston, he won his first orchestral audition in 1983. But the job took him to Durban, South Africa.

“I was in South Africa at a time when apartheid was still there, and it affected me in a way that I wasn’t anticipating,” he says.

Walzel recalls walking around the city with a group of other young members of the orchestra when he first arrived, which brought him face to face with the inhumane structure of the society.

He says, “There was a blind beggar who’d had his legs eaten off by leprosy. He had an actual tin cup. I had one rand coin, which at the time was worth about 85 cents, and I put it in his cup.

“A police officer came up to us and said, ‘Are you an American?’

“He said, ‘It’s against the law to give money to anyone who’s black.’

“He said, ‘It doesn’t matter. If you do it again, you’ll be given a citation. Do it after that, you’ll be taken to jail.'”

Walzel adds, “It was an incredibly repressive and heartless experience. That was the first one that made me go, ‘What am I doing here?’ I didn’t stick around real long after that.”

He returned to Houston afterward, where he resumed his pursuit of music. Playing both clarinet and saxophone, he racked up an array of accomplishments, whether as the principal clarinetist of the Lubbock Symphony Orchestra or on international tours as a solo artist. He was even president of the International Clarinet Association.

He cites Eddie Daniels as his favorite clarinetist on the jazz side and Robert Marcellus on the classical. Which does he prefer?

“I’m probably more of a classical guy, but I crossover and do both. I’ve played a lot of different kinds of music, from rock and roll to German polkas to opera,” he says.

The 51-year-old Walzel says teaching and administration had never really crossed his mind during his years as a performer.

“It wasn’t until after I established myself in a professional career when I really re-evaluated and discovered that teaching is what my calling in this life is about,” he says.

“The stakes were a lot higher in terms of the historical nature of choosing the first dean of the School of Music,” says John Stephens, a KU professor of voice who chaired the search committee that hired Walzel.

Stephens says his ultimate candidate “had an enormous amount of what we perceived to be the right kind of experience.” The committee was hoping for an amalgam of a world-class musician, a shrewd administrator and a person who had a genuine love of teaching.

“He’s extremely bright yet very down-to-earth,” Stephens says of Walzel, who has a doctorate of musical arts in clarinet performance from the University of North Texas.

“He’s got vision, he’s articulate, and he’s really dedicated to taking this music school to the next level. He’s hit the ground running, and we’re thrilled that we landed him.”

Walzel, who began the position June 14, has already embraced the music scene in Lawrence beyond just what the university has to offer. He’s been out to a number of shows already and has even performed three concerts with the Lawrence City Band.

“There’s a great sense of community here. People are genuinely proud of Lawrence’s heritage and proud to make it a special place to live,” Walzel says. “That doesn’t always exist everywhere.”