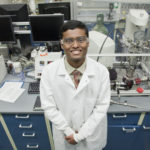 Growing up in India, Madhav Ghanta’s education was shaped by the 1984 Bhopal gas tragedy, the world’s deadliest industrial accident, which killed thousands of people in his home country.

In Ghanta’s view, the deaths at Bhopal were the result of obsolete technology.

“We need to come up with ways to improve the quality of our life to sustain our lifestyle (without) having to damage the environment,” Ghanta said. “So that is my driving force.”

At 24, Ghanta has received recognition for doing just that.

The graduate student, who came to KU in 2006, is part of a team of researchers working on a cleaner way to make ethylene oxide.

“With increasing standard of living and population, more people are consuming these commodities. And the amount of carbon dioxide that you are generating will keep increasing as you are making more and more ethylene oxide,” Ghanta said.

Ethylene oxide is the second largest emitter of carbon dioxide among all chemicals, sending 3.4 million tons of carbon dioxide into the air. It’s a number equal to the pollution created from 900,000 cars each year.

For his work, Ghanta was one of two graduate students in the nation to receive the Kenneth G. Hancock Memorial Award in Green Chemistry.

Selected by the American Chemical Society’s Green Chemical Institute, Ghanta was presented with the award last week in Washington, D.C.

He received the award during the Presidential Green Chemistry Challenge Award Ceremony, where Ghanta’s work was presented alongside green achievements by industry giants like Dow Chemical and BASF.

Ghanta was the first KU student to receive the award, the highest given to doctorate students for breakthroughs in green chemistry, said Bala Subramaniam, director of the Center for Environmentally Beneficial Catalysis.

“I think it definitely speaks very, very highly of the kind of students we have,” said Subramaniam, who made the trip with Ghanta to D.C. “It also speaks highly of the quality of research that happens at our center.”

The center has been working on a carbon dioxide-free process to produce ethylene oxide for the past several years.

Ghanta’s calculations for temperature, pressure and mixing provided a breakthrough in finding a method that didn’t create carbon dioxide as a byproduct, Subramaniam said. It also reduced the amount of ethylene wasted, which costs companies around $2 billion each year.

“This has been a grand challenge in industrial chemistry to develop a CO2-free ethylene oxide (process),” Subramaniam said.

Companies have taken notice of the breakthrough, Ghanta said. Currently KU is working to license the technology, but more analysis has to be done before the technology becomes commercialized.

“There is a lot of promise for this process to succeed on a large scale,” Subramaniam said.