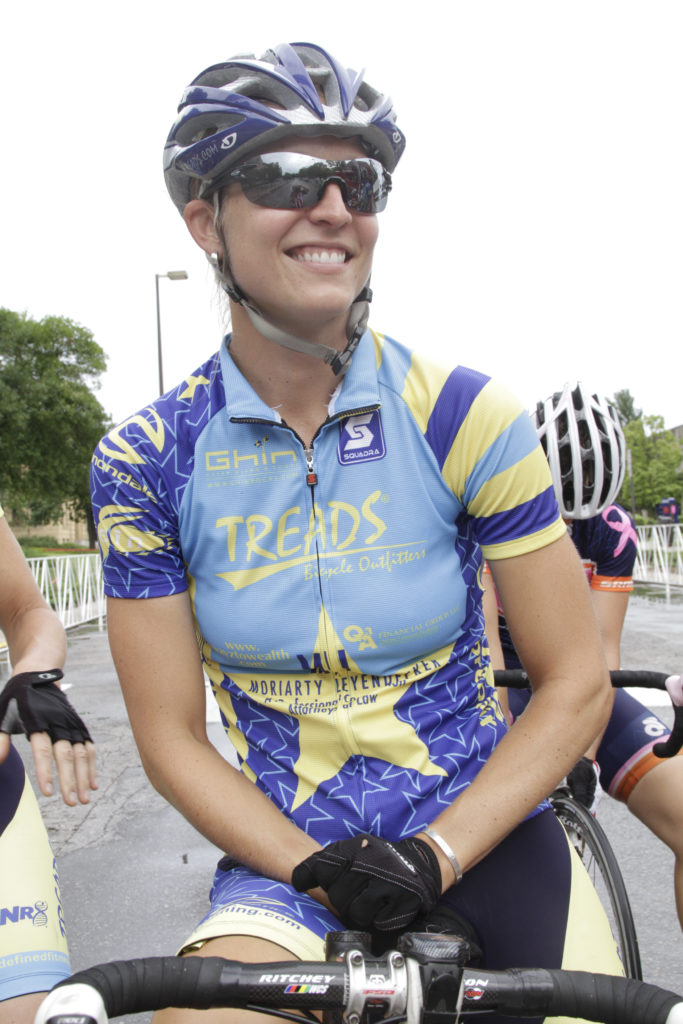 Megan Hottman, 31, of Golden, Colo., was the winner in the women’s top division of the Kansas University Campus Circuit on Saturday. Heavy rain fell before the women’s race, causing Hottman to crash twice.

During today’s Tour of Lawrence downtown cycling race, Megan Hottman has every intention of winning the top women’s division.

But she’ll have a completely different goal in mind when she competes in the men’s division, just minutes after finishing the women’s event. Then, she will be in serious training mode for a berth in the 2012 Summer Olympics.

The 31-year-old Golden, Colo., resident is using her time during the Tour of Lawrence to gain momentum for the track cycling national championships in September and then a season of international competitive track racing this winter.

It was on her coach’s orders that she came to the three-day Tour of Lawrence with plans to compete in back-to-back races in the women and men’s division.

“It forces me to work harder to stay in there. These guys are pros; obviously they are fast,” she said.

On Saturday, Hottman placed first in the women’s top division in the KU Campus Circuit, a 4-mile loop that had 500 feet of vertical climb and less than a half-mile of level terrain.

She had plans to compete in both divisions of Saturday’s race as well. But a heavy downpour right before the women’s race left roads slick. Hottman crashed twice during the first race and didn’t want to fall a third time, so she pulled out of the men’s division.

As long as the rain holds off, Hottman fully intends to compete in both the women’s and men’s races this evening. In today’s race, cyclists will whiz around a one-mile circuit in downtown Lawrence for 70 minutes. The rider who covers the most distance wins.

Bill Anderson, a local cyclist and volunteer for the Tour of Lawrence, said it’s not uncommon for top women cyclists to enter the men’s division during regional racing events. The main draw is that more men compete in the races, so riders draft and work in teams.

“You get pack experience,” Anderson said.

For Hottman, racing with the opposite sex is exhilarating. And the men have been good sports.

“I’ve never had a guy take me to the curb or anything like that,” she said. “They know I’m not competing for the win, but out there for a good experience.”

Tomorrow’s races will be among the many Hottman enters on her quest to earn a spot on the 2012 Olympic team for track cycling.

To be selected for the Olympic team, she has to earn points in international competitions. In March, Hottman quit her job as an attorney to commit full time to Olympic training. She plans to spend this winter traveling abroad competing in races in Manchester, Melbourne and Beijing.

“It’s always been a dream in my heart,” Hottman said of going to the Olympics.