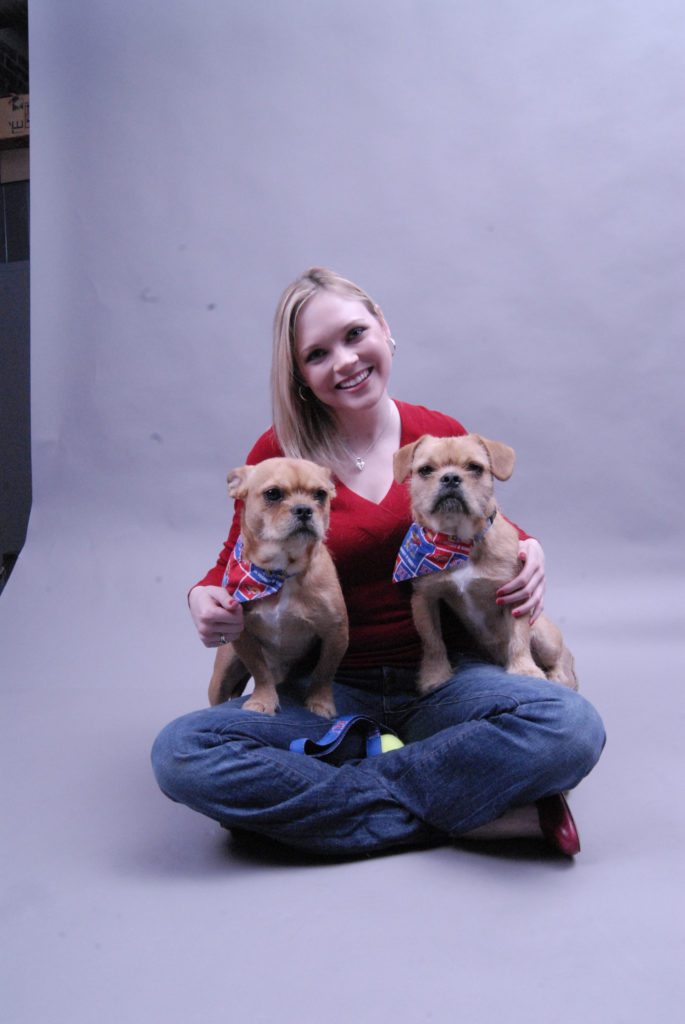 Kristin Howard is pictured with her dogs. She has spent about ,000 a year on each of them in veterinary care. 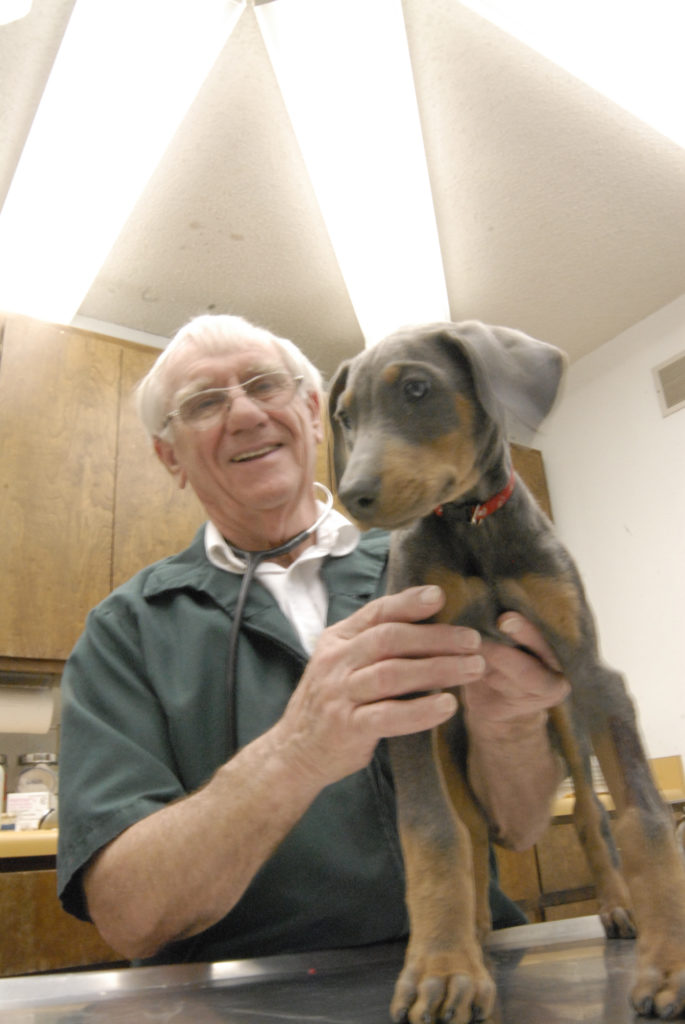 Dr. Herschel Lewis is shown with a patient at his Lawrence office, 3101 W. Sixth St.

Kristin Howard has had a few pets in her time.

“I’ve always had pets around and couldn’t imagine my life without them,” Howard says. “For me, animals are a part of my family — most of the time I actually like them more than my family!” she laughs.

Really? You count rats as family?

“Rats are wonderful pets. They really are like little dogs. They have great personalities, and mine even learned their names,” Howard says.

It’s little wonder that she’s never been one to cut corners when it comes to the vet — even for her rats.

“I had a rat (Izzy) who had a tumor that grew to be the same size as she was. I ended up having it removed, and she lived for another year,” she says. “People thought I was crazy for paying for surgery on a rat that I paid $3 for, but she was my pet, and I wanted to do everything I could for her.”

At $200, that one surgery put Howard on the high end of average annual U.S. expenditures for a single pet. Now that she has a couple dogs, she’s spending a lot more — around $1,000 each of the two years she’s had them.

“I spend more on my dogs than I do on myself,” Howard says of Gus and Sydney, her French bulldog/Lhasa Apso mixes. “I follow the vet’s advice, and luckily I have found a vet who cares about what is best for my pet and is cost-effective rather than just trying to make as much money as they could.”

Pet owners in general are spending more and more at the vet these days — average U.S. household vet expenditures are up 10 percent from 2001, according to the American Veterinary Medical Association.

In Lawrence, Dr. Herschel Lewis says the amount each client has been spending at his clinic has been noticeably on the rise ever since he opened it in 1965.

He attributes that to a number of things — better diagnostics that uncover more treatable conditions, more and better vaccines, the advent of more costly specialists, and so on.

“But it’s as much a reflection of the general economy. People are spending more money, but there’s more money to spend,” Lewis says.

He says, too, that people are taking better care of their pets than they used to.

“When I first came to Lawrence, I’d routinely have a car accident case when there was a home KU football game. People would just let their dogs run wild,” Lewis says. “Now I seldom see that Saturday afternoons, and I’m sure that’s the case with my colleagues, too. People are taking better care of their animals — their attitudes have changed.” 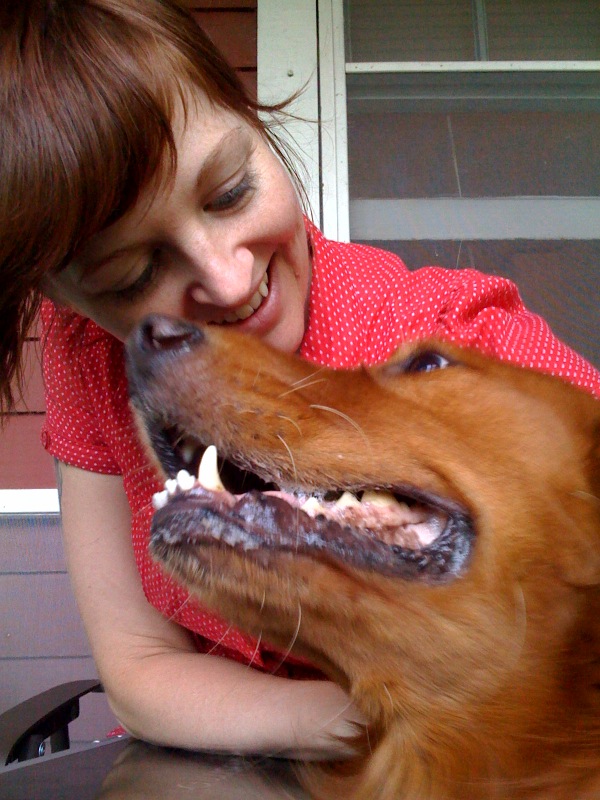 Erica Eden and her dog, Mabel.

Option A or option B

For the first six years, Erica Eden’s golden retriever Mabel was fit as a fiddle. As her mom puts it, “she’s a lover, a cuddler and a serious protector.”

But then Mabel seemed to have chronic health problems. First she tore her ACL. Then she got some sort of infection that made her breath smell foul and kept her from walking. Later, she reinjured her ACL. And then came the big blow.

“Her face swelled up, and she’d had bee stings before, so I gave her some Benadryl,” Eden says. “The swelling went down, but there was still something hard there. …

“I usually go the 24 or 48 hours before calling the vet with something like that. But I just knew there was something really distinct about it, something wrong. I know it sounds weird, but I just knew it.”

Turns out, it was cancer.

“Because I’ve had such health problems, I guess I’m more aware, or maybe I’m just more crazy,” says Eden, who has been diagnosed with cancer herself.

Her Lawrence vet felt the tumor was serious enough to require immediate surgery, even though it would be on a weekend. Getting the cancer out cost her nearly $1,000.

“At the time, all I could think about was whether she’d make it out of the surgery. I didn’t think about how much it would cost or how I’d pay for it until reality sunk in when I went to pick Mabel up,” Eden says.

Pet care by the numbers

Number (and percent) of households owning:

Veterinary visits per household per year:

Many pet owners must weigh a treatment’s cost upfront, though, especially when it comes to non-life-threatening problems — which makes for tough decisions, says Dr. Lewis.

“It’s not unlike in human medicine,” Lewis says. “Example — like it or not, dentistry is a luxury. If you don’t have the money, you don’t have the root canal, even though it’s in your best interest. Same goes for the pet population.”

Indeed, pets’ teeth — along with cancer — are among the most frequently untreated maladies, he says. Eye care, joint problems, torn ligaments, diabetes, allergies and urinary stones are others.

A good vet will be sympathetic to a pet owner’s difficult choice between a tight budget and an expensive procedure, says Dr. Jon Haggard at Eudora Animal Hospital.

“It’s our job to let people know what all is available. It’s not our job to say, ‘This is what I’d do,'” Haggard says.

“If you want to go with option A, the Cadillac option, (we refer you to) the specialist and you might spend $3,000 on doing biopsies and ultrasounds and as much diagnostics as possible,” he says. “Some clients want to go as far as possible to cure the animal.

“Option B is we can do things here and come up with the best solution that we can,” Haggard says. “We understand some options can be out of reach.”

Pet owners can buy pet health insurance, which is available in varieties comparable to human health insurance — everything from bare minimum catastrophe coverage to Cadillac coverage. But only a few pet owners have even the minimal coverage at both Lewis and Haggard’s clinics. They say paying insurance premiums doesn’t yet make financial sense given the relatively low cost of even major procedures.

“On the coasts, where costs are much higher, it probably makes more sense,” Lewis says. “But in the Midwest, it’s going to be a while before pet insurance is more common.” 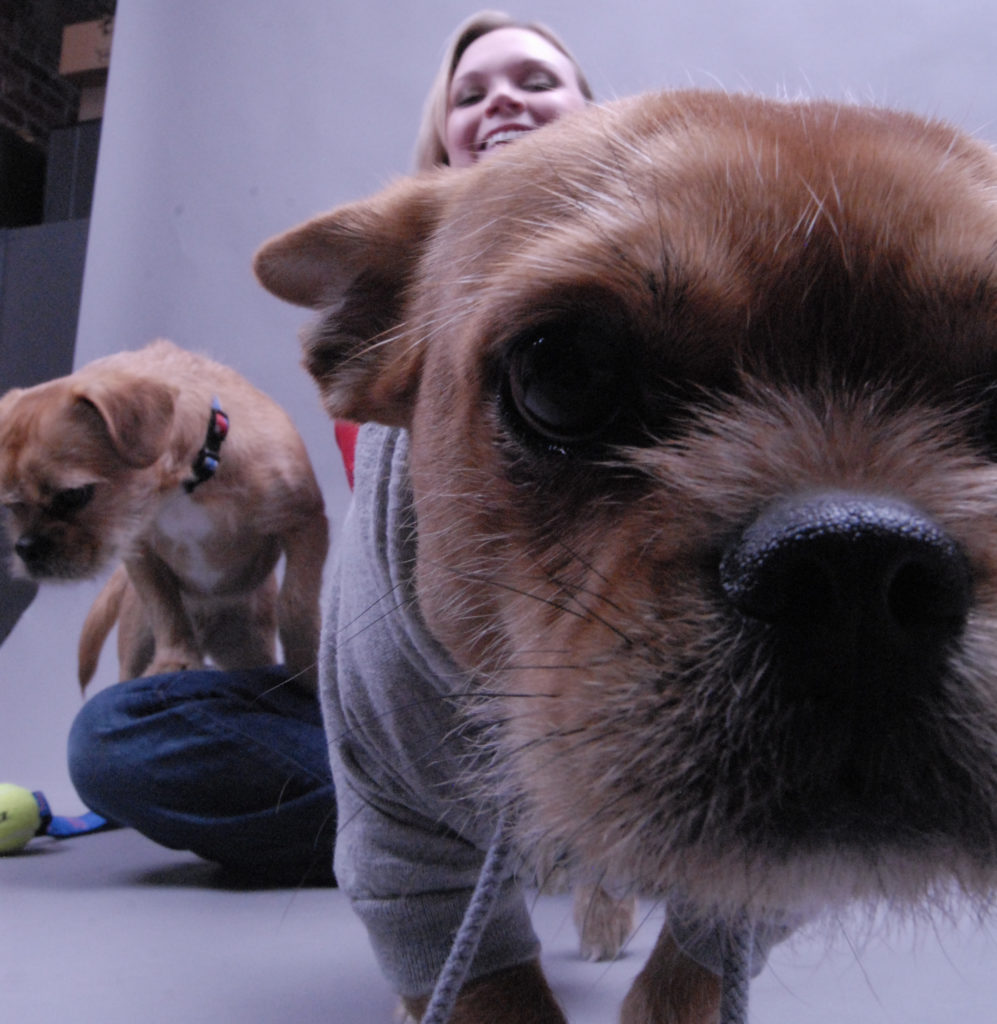 Gus and his owner, Kristin Howard.

All kinds of pets

Haggard says one of the most common decisions pitting price against a pet’s well-being is a torn knee ligament, which is especially common in larger dogs. To really fix such injuries usually costs several thousand dollars at an orthopedic specialist, he says. In-house surgery at a non-specialist like the Eudora Animal Hospital can often achieve comparable results for $600 or so.

For those who can’t afford either option — or for older, less active pets — some anti-inflammatory medication and immobilization can be effective for less than $100, Haggard says.

Most animals will heal fine, even with the cheaper option, Haggard says. “It may be fine for a couple months and they may take a bad step and they’ll carry it again for a while. But they do heal and do fairly well.

So what’s your philosophy on pet raccoons?

“I bet monthly we get a squirrel, a rabbit, a raccoon,” Haggard says, adding that nondomestic pets are sent to Operation Wildlife. “There are people who have pet skunks. At least annually we’re asked to de-scent a skunk — people take in all kinds of pets.”