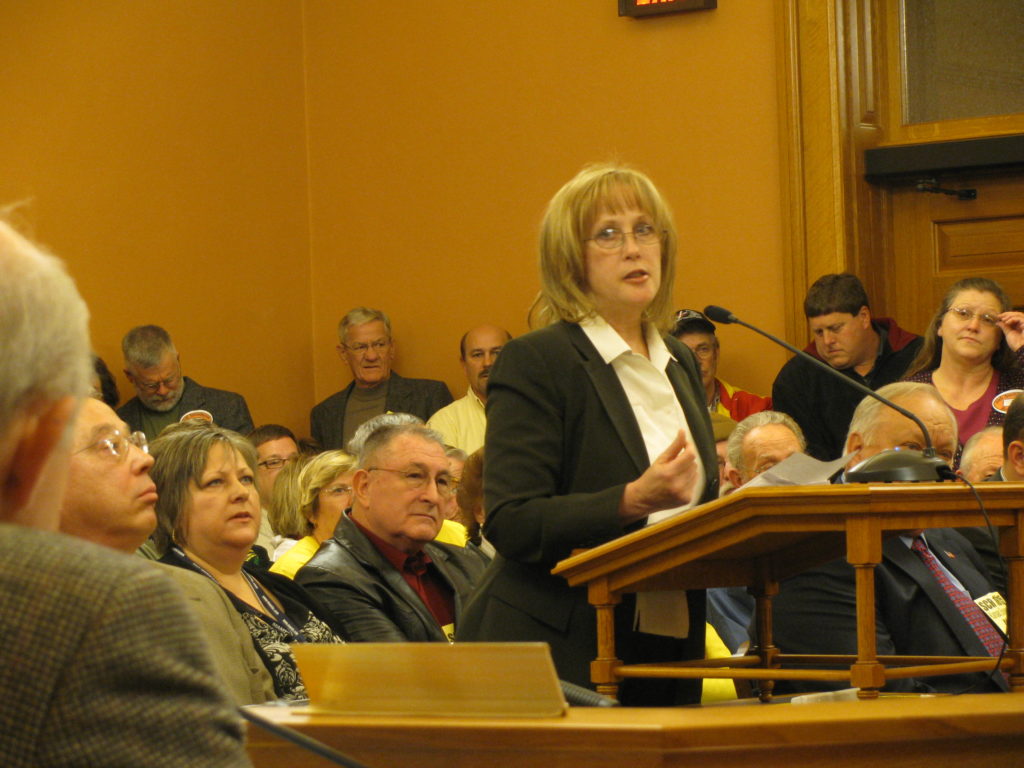 State Sen. Mary Pilcher Cook on Friday speaks to the Senate Judiciary Committee on Senate Concurrent Resolution 1615, which urges the federal government to recognize state's rights. The hearing room was packed and numerous people had to stand in the hallway. The committee took no action on the measure.

Topeka ? What started on Friday as a show of support for a resolution denouncing the reach of the federal government in the current and previous administrations turned into an anti-Democratic Party rally.

“It’s time for Nancy Pelosi and Harry Reid to get off your backs, get out of your business, and get out of your wallets,” Jenkins said at a rally at the Dillon House across the street from the Capitol. Jenkins represents the 2nd District, which includes west Lawrence.

State Sen. Tim Huelskamp, R-Fowler, and a candidate for the GOP nomination in the 1st U.S. House district, referred to a previous job held by President Barack Obama, saying “we don’t need a community organizer from Chicago” telling Kansans what to do. 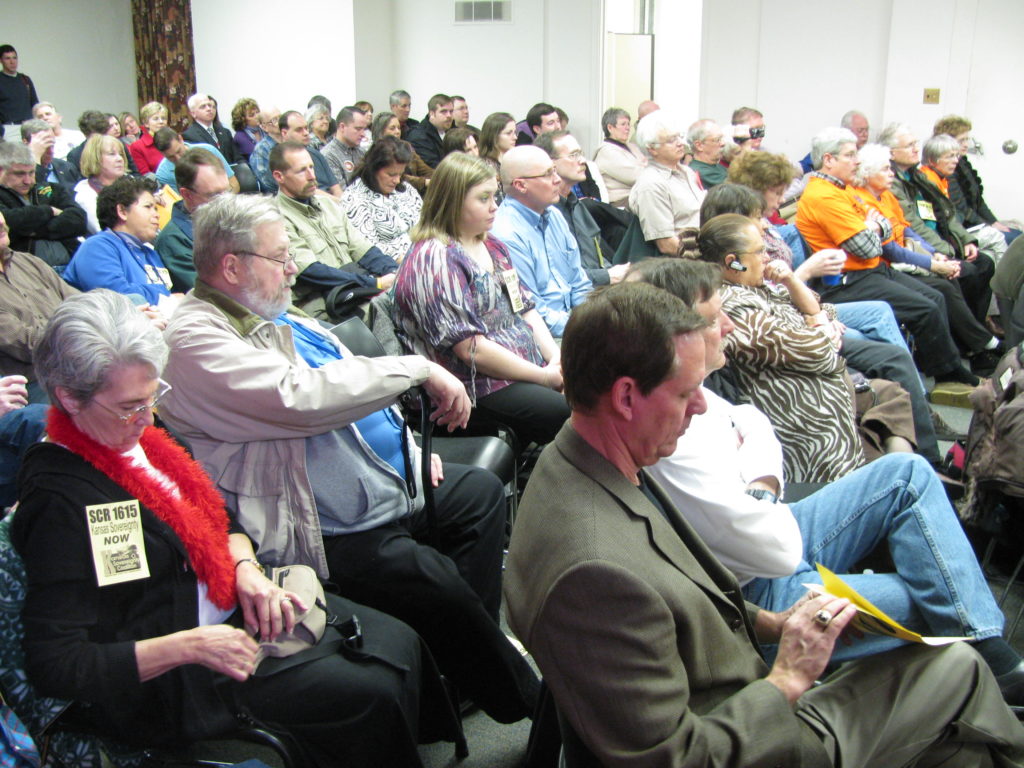 Crowd at the Dillon House on Friday in Topeka listens to speakers. The all-Republican lineup of speakers denounced the Democratic administration. Earlier in the day, a committee hearing was held on a resolution telling the federal government to stop intruding in the business of states. No action was taken on the measure.

And former Kansas Republican Party Chairman Kris Kobach, who is running for secretary of state, said Obama and the Democratic-controlled Congress had embarked on a “radical agenda.”

The rally and an earlier hearing were sponsored by the Kansas Sovereignty Coalition, and backed by the Kansas chapter of Americans for Prosperity, and Political Chips, a “tea party” organization.

The events started when more than 100 people crowded the Statehouse to urge legislators to approve a resolution before the state Senate that calls on the federal government to stop intruding on the rights of states.

Senate Concurrent Resolution 1615 says that many federal laws violate the U.S. Constitution’s 10th amendment, which gives states power over areas not specifically designated to the federal government. If approved by Kansas legislators, the resolution would be forwarded to Obama, congressional leaders, and the Kansas congressional delegation.

About a dozen people spoke in favor of the resolution during a hearing before the Senate Judiciary Committee, which took no action on the measure.

Most speakers at the hearing said the federal government has intruded too far into the business of the states, several specifically mentioned the health care reform bill pending in Congress.

State Sen. Mary Pilcher-Cook, R-Shawnee, and the main proponent of the measure, said the proposal “says simply don’t tread on our freedom.” Later, Pilcher-Cook said the resolution represented the first step in an effort to get before Kansas voters, a constitutional amendment aimed at removing Kansas from the requirements of any federal health reform.

But Rodney Wren, a teacher from Wichita, said the resolution was “naive at best, dangerous at worst.” Wren said the federal government has authority over state governments.

State Rep. Paul Davis, D-Lawrence, who did not attend the hearing, later dismissed the resolution as unnecessary. He said disputes over whether federal laws are constitutional are handled in the court system.

Later at the rally, the anti-Democratic Party rhetoric flowed.

Referring to the cap-and-trade bill, Jenkins said, “The only thing we should be capping is the hot air coming out of Harry Reid and Nancy Pelosi.”

Pyle compared the crowd to Paul Revere’s ride alerting American colonists of the British army. “You now come in the nick of time to warn patriots and prepare them for a just fight. You are today’s Paul Revere but you do not ride alone,” he said.