Bill to abolish the death penalty fails in Kansas Senate 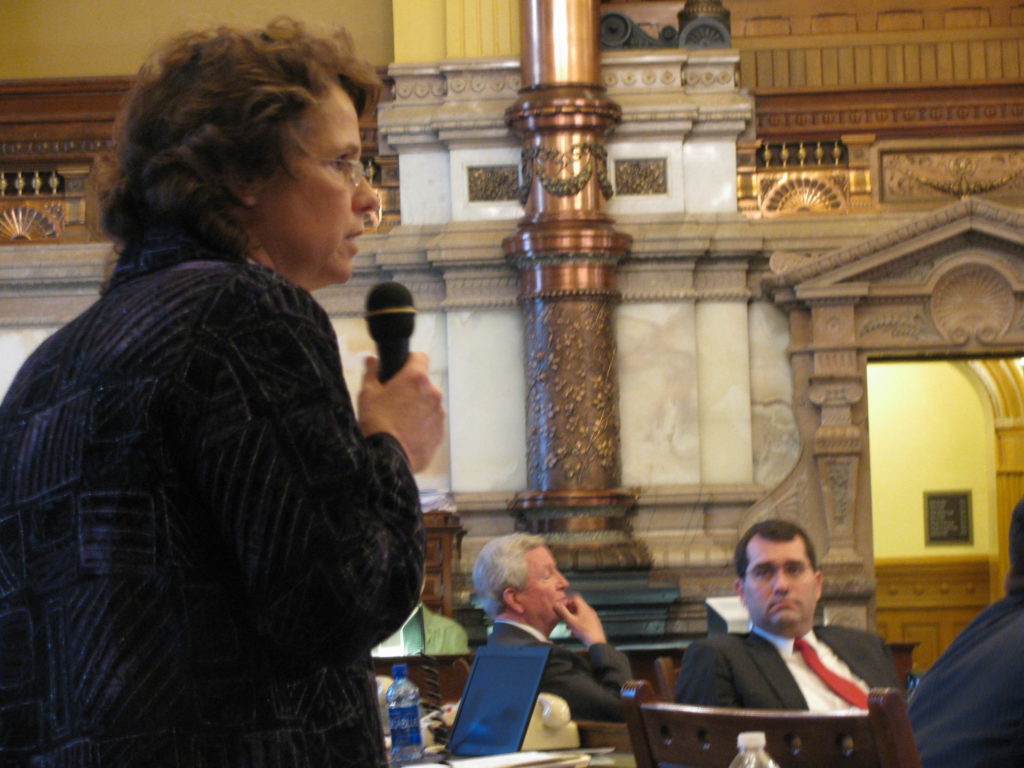 State Sen. Carolyn McGinn, a Republican, argues against the death penalty during debate on the Senate floor on Friday.

Topeka ? After a sometimes emotional debate, a bill to abolish the state death penalty failed Friday in the Kansas Senate.

Perhaps reflecting society’s divide on the issue, the Senate voted 20-20 to repeal capital punishment, one vote less than the 21-vote majority needed for passage. The vote likely kills the issue for the year.

State Sen. Carolyn McGinn, R-Sedgwick, led the charge to get rid of the death penalty, saying it failed to deter crime, was applied unfairly and simply wasn’t working.

McGinn said the extra funding required to litigate death penalty cases robbed other needs, such as public safety and social services that could pre-empt criminal activity.

“Can we use it (funds spent on death penalty cases) to solve cold cases for those families who don’t even know who murdered,” their family member, she asked.

And she and others said it was inconsistent to be opposed to abortion and support the death penalty. However heinous murderers are, they are still children of God, she said. “Tell me, at what point in time did they lose that status and who made that decision,” she said.

But supporters of the death penalty pushed back. Senate Majority Leader Derek Schmidt, R-Independence, sought to gut the bill, saying he didn’t want to put family members of murder victims through the emotional roller-coaster of a death penalty debate. But his amendment failed on a 20-20 vote.

Several senators maintained that they could be opposed to abortion and for the death penalty.

Sen. Ty Masterson, R-Andover, argued that a condemned person would be more likely to repent than someone who is serving life in prison.

Since 1994 when capital punishment was re-instated in Kansas, 10 men have been sentenced to die, but no executions have occurred.

State Sen. John Vratil, R-Leawood, said that nationwide since 1973, 139 people sentenced to die were exonerated through DNA evidence. “I don’t think that we can afford that kind of error rate when we are talking about taking that person’s life,” he said.

And state Sen. Chris Steineger, D-Kansas City, argued that life in prison was harsher than execution. “The most cruel punishment is to be locked up in prison, alive but without freedom,” Steineger said.

But several opponents of the bill said that the Senate debate was futile because even if the bill passed, the House was not interested in acting on the issue.

The Douglas County delegation represented the split in the Senate. Marci Francisco, D-Lawrence, voted for the repeal, saying her constituents supported getting rid of the death penalty. But Tom Holland, D-Baldwin City, said he supported the death penalty and that he heard from constituents on both sides of the issue. Holland turned out to be the only Democrat of the nine Democrats in the Senate to vote against the repeal.

Of the 31 Republicans in the Senate, 12 voted for the repeal, and 19 voted against it.

After the vote, Bill Lucero of Topeka, who has lobbied for years for an end to the death penalty, said he was disappointed that the bill failed, but encouraged by the near victory.

“This is just another step toward eventual abolition,” Lucero said.