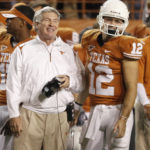 Texas quarterback Colt McCoy, right, celebrates a victory with head coach Mack Brown near the end of a 51-20 win against Kansas, Saturday, Nov. 21, 2009, in Austin.

A source with ties to the Big Ten said that while most people’s attention has been trained on the conference stealing Missouri, the Big Ten has engaged in “preliminary exchanges” with a much bigger fish from the Big 12.

“There have been preliminary exchanges between the Big Ten and Texas,” the source told the Journal-World on Wednesday. “People will deny that, but it’s accurate.”

Missouri and Pittsburgh have been the most talked-about candidates to fill the 12th spot, which would enable the conference to have the postseason football conference title game it lacks. In December of 2009, the Big Ten issued a statement that the timetable for expansion was in the 12-to-18-month range.

Travel costs, in terms of money and fatigue, make Texas seem on the surface like a stretch, but TV revenue would more than make up for the fatigue factor.

Getting TV sets in the massive state of Texas tuned to the Big Ten Network would qualify as a home run for the Big Ten.

Texas already receives the most TV money in the Big 12 because of its frequent national network appearances, but the source said Texas still thinks it can get a better deal for itself and is considering forming its own state-wide TV network.

Geographic concerns don’t carry the weight they once did because TV revenues have grown so much, and this wouldn’t be the first time Texas has considered such an odd geographic match. Before joining the Big Eight with three other schools from Texas, the Longhorns looked into joining the Pac-10.

Veteran basketball columnist Mike DeCourcy, writing for The Sporting News on Dec. 16, wondered why nobody other than him was talking about Texas as the most logical school for Big Ten expansion.

“No one seems to recognize the genius of this suggestion, which may be evidence of its genius,” DeCourcy wrote. “Everyone else seems to be thinking small and boring, but as I suggested not long after the Big Ten Network was conceived, Texas is the one program that could dramatically expand the money-making power of the league’s cable operation.”

Much later than DeCourcy offered the suggestion, the two parties finally have inched toward each other with “preliminary exchanges.”