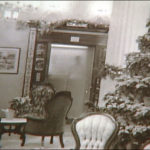 This photo, apparently showing a shadowy figure in an elevator at the Eldridge Hotel, 701 Mass., is among the evidence that, according to some believers, proves a ghost lives in the building.

The Eldridge Hotel, 701 Mass., is being considered as the subject for a segment during the upcoming season of “My Ghost Story” on A&E’s Biography Channel.

Anyone with a ghost story to tell — and some visual evidence to support the claim — regarding the hotel may contact Patti McCormick at patti@oliviacollection.com. While she already has located a couple candidates willing to share their tales of the paranormal, she’s seeking more.

The hotel doesn’t track how many visitors check in at The Eldridge with hopes of encountering a ghost, but McCormick knows the number of spirit-seeking tourists is on the rise.

“This is a phenomenon that’s ginormous,” said McCormick, who handles special events for The Olivia Collection, which includes the Eldridge and two other properties. “It’s huge, all over the country.”

If you’ve felt an unexplained chill, sensed an unseen visitor or taken an elevator up to an unexpected floor at the Eldridge Hotel, Patti McCormick wants to hear your story.

You just might get to share it with millions of others on a television network’s most popular show, says McCormick, director for a group of properties that includes the Eldridge.

“They’re looking for legitimate people — people who may have been actual guests — to report their ghost stories,” said Beth Cooper, who runs Topeka-based Paranormal Adventures USA. “They’re not doing paranormal investigations or hearsay, just authentic people who’ve had an experience.”

And they’re searching for folks who can back it up.

The show, “My Ghost Story,” is shown on A&E’s Biography Channel and features people recounting tales and providing what is described as “strong visual evidence” of their personal experiences: photos, videos or other materials lending credence to their claims. People tell their own stories in their own words, while viewers catch glimpses of the personal evidence and other footage from locations where the experiences are said to have taken place.

At the Eldridge, 701 Mass. in downtown Lawrence, that most likely would be Room 506. That’s where the hotel’s original cornerstone remains and is known as a place where friendly spirits — perhaps even Col. Shalor Eldridge himself? — continue to linger, long after Quantrill’s Raid and other noteworthy events have faded away.

Unsuspecting guests report pressing the elevator button for “3” or “4,” only to end up on the fifth floor. Employees say they’ve been “visited.” Ardent fans of the paranormal request the room, sometimes leaving with their own first-hand experiences.

It’s enough that McCormick doesn’t blink when she describes the hotel as haunted.

“They hear things. They see things,” she said. “I don’t believe it, but we’ve had so many people give us accounts and stories of their stays — from all kinds of people. You would think that something has to be going on.”

But those tales may as well be ghosts themselves: While the Eldridge maintains a written list of what apparently happened and when, employees never attach names with the stories.

So now it’s a matter of finding former guests or employees who might be willing to share — their stories, their feelings and, perhaps most importantly, their images — with a much larger audience.

Just e-mail McCormick, who is working with a “My Ghost Story” producer on a potential show for this spring.