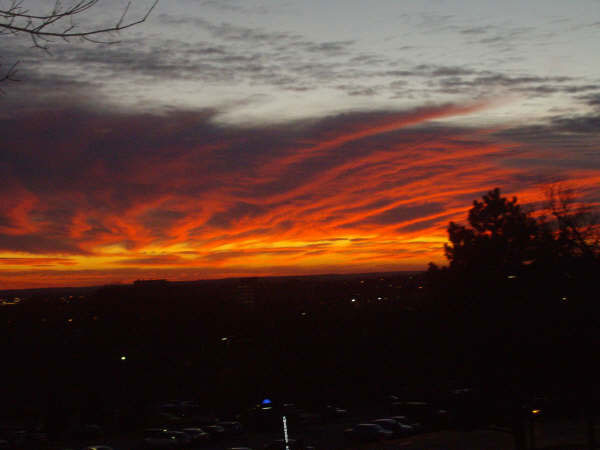 The sun sets over the Kansas University campus.

Some of the best sunsets happen in my rearview mirror.

That was the case one October evening. I was eastbound, driving from Garden City to Dodge City, when a gorgeous sunset sneaked up behind me.

The sky struck its best pose of the day. Golden end-of-time rays streamed from purple and crimson clouds. As I caught the sky-shattering color in my mirror, I noticed a lone elevator in the foreground which would’ve been perfect to help frame a photograph.

Unfortunately, it was not until a mile or so later that I was able to pull off of the highway and into a rest area. As I jumped out of my car, another woman leapt from her Maryland-tagged vehicle, camera in hand. Together we snapped photos of the sunset, but the energy of the colors had drained. We were two minutes too late; the magic was gone.

During the day, clouds drift across the sky without much notice given to them. But in the evening, during that comma of time between daylight and darkness, the sun’s filtered light paints color onto those clouds, turning them into a kaleidoscopic billboard.

Our minds try to click onto the sunset to recall it later, but the shapes shift with each breath, the colors meld, and the cloudscape falls away as quickly as a dream upon waking.

My brother, Leon, who lives in Alaska, spent two weeks in Kansas this past summer. He photographed the sunset every evening.

On his blog, Leon suggested that perhaps Kansas could focus less on some of the other state promotions and simply market our skies.

“The real money is in sunsets,” Leon wrote. “Build motels and restaurants with big west-facing windows, promote them to people from soggy states, and you’ll have a moneymaker.”

Because we’ve had so many incredible sunsets this autumn, I wondered if any one season produced more sunsets than another. So I asked that question of Mark Bogner, meteorologist at KSN-TV in Wichita.

Apparently, each of our four seasons is an equal-opportunity sunset provider.

While traveling around the state, I’ve watched these peach-tangerine-pomegranate sunsets from the Kansas highways. But at home, I tend to miss them. Our house faces east and the view to the west is blocked by trees, houses, garages, i.e., ground clutter. While I am in a good position to catch sunrises, I don’t always catch the evening event.

My friend, Janet Fish, of Madison, paid close attention to sunsets when she and her husband, Larry, lived in Emporia on East Second Avenue. She said, “There were late afternoons when Larry would zip in and holler ‘sunset alert’ and we’d stand in the yard and watch with our arms around each other.”

Janet said that from their location the color in the sky would glow behind the steeple of Sacred Heart Church. “Some nights it was so stunning that it would bring tears to our eyes.”

Janet has suggested a neighborhood notification system, church bells perhaps, something that would get our attention and send us all out into our yards to take in the show.

I asked Mark Bogner if sunsets could be forecast.

He said, “A fairly reliable forecast of a pretty sunset can be made a few hours in advance by looking at a satellite picture, but the atmosphere is still full of surprises and some set-ups that look great give average sunsets, and occasionally one that looks like it might not bring much will just take your breath away.”

Viewing a fiery Kansas sunset can make us pause, breathe deeply, turn a crazy day into a moment of peace, as that poem of light shifts against the darkening sky.

Our lives would be richer, wouldn’t they, if we each spent one minute a day watching the sky fill with flaming color. I can picture it now in every Kansas town: yards, sidewalks and driveways filling with neighbors, heads raised, eyes to the western sky, absorbing that moment of splendor. Let’s do it. I’ll meet you outside tonight.