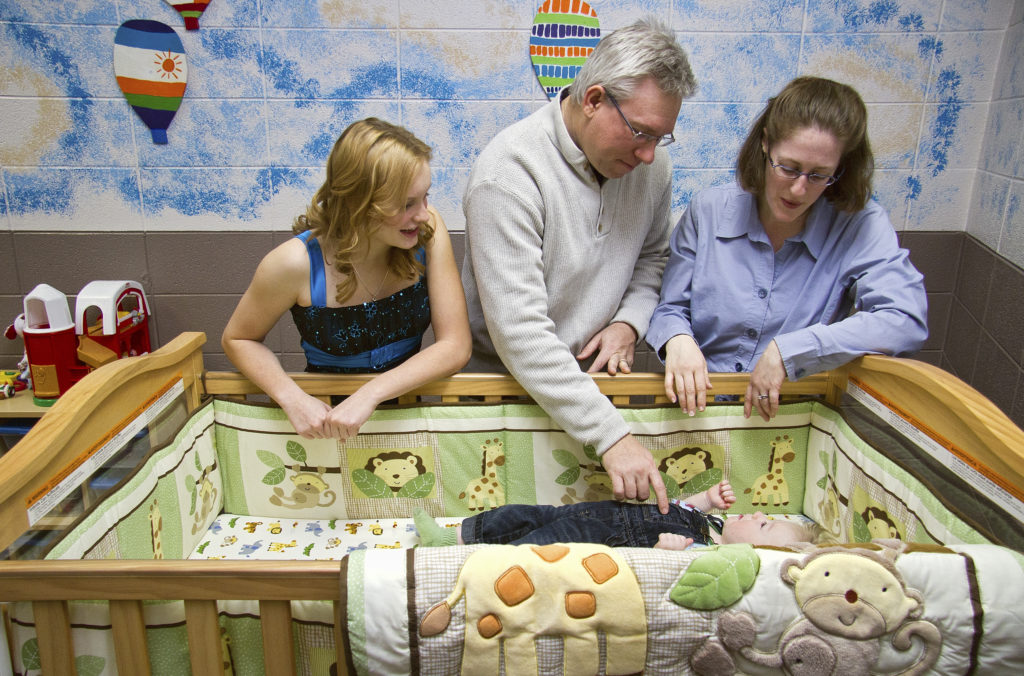 Jaclyn Long, 16, left, stands with BJ and Alecia Gray as they play with their 7-month-old son, Benjamin, in the newly renovated nursery at West Side Presbyterian Church on Sunday. Long, a junior at Free State and a Girl Scout Ambassador 7744, completely redesigned the church’s nursery as a project to receive her Gold Award.

Christmas came a week early for the congregation at West Side Presbyterian Church. Their gift this year: a custom-designed nursery.

But it wasn’t Santa who designed the nursery; it was Jaclyn Long, a junior at Lawrence High School. Jaclyn, a Girl Scout Ambassador, chose the church nursery as the goal for her Gold Award project, the Girl Scouts’ equivalent of the Boy Scouts’ Eagle Scout project.

Jaclyn said she chose the nursery for her project because that is where her cello ensemble group would practice, and she could tell it was in need of repair. Church staff and the congregation agreed. The new nursery was a much-needed improvement from the previous.

“It’s a 100 percent change,” said Craig Chappell, outreach coordinator. “The proposal from Jaclyn came out of left field, but we couldn’t have asked for more.”

Instead of grungy-looking walls, a crib that outdated current safety regulations, a bathroom in poor repair and an overall outdated feel, young ones and their parents are now welcomed with a clean, bright, joyful atmosphere. Jaclyn’s heavens and sky theme includes one wall of kites and another wall of hand-built hot air balloons. On the center wall lies an angel mural.

Besides the wall decorations, the nursery includes yellow window curtains with swirls symbolizing wind, a floor full of children’s toys, a flat-screen TV, a remodeled bathroom, an updated crib and much more. All in all, through letter campaigns and donations, Jaclyn raised about $6,000 for the nursery. Chappell said that without the help of Jaclyn, the church would have never been able to do the remodeling that was desperately needed.

Jaclyn started the project in July and has been working with the church and donors ever since. While the process was fun, she said, it was the end result that mattered most.

“The best part was talking and meeting with people and seeing the toys all over the floor and knowing that they have been played with,” Jaclyn said.

Alecia and BJ Gray are excited to have a bright, clean, cheerful nursery for their newborn son, Benjamin.

“It’s a great place to leave our son, and it’s a huge improvement from before,” father Gray said.

Dozens of other appreciative members showed up Sunday during Jaclyn’s award ceremony and nursery dedication to express their gratitude. Sherry McBride, a retired preschool/kindergarten teacher for the church, said she was blown away by the progress she observed. She said Jaclyn is an exceptional person with great initiative, dedication, hard work and generosity. She said the message and theme behind the nursery is obvious.

“It just looks like it’s full of love,” McBride said.