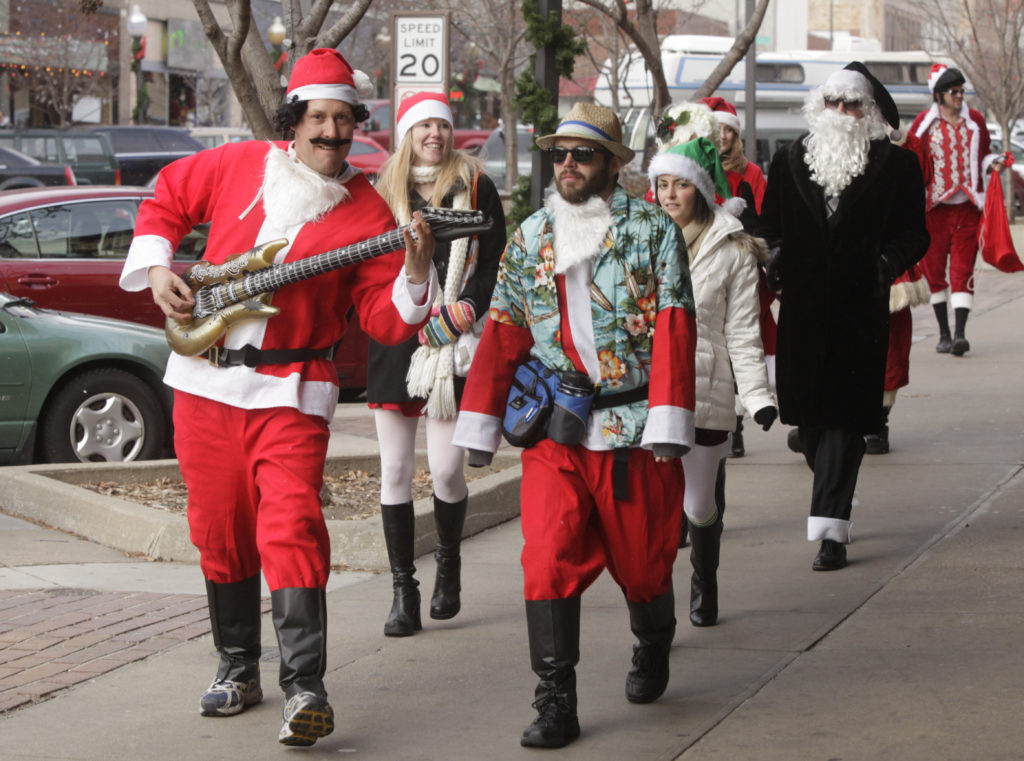 a crowd of Santas gathers in downtown Lawrence on Saturday for Lawrence’s first ever SantaCon. Starting at The Sandbar, Santas and other holiday characters made their way from bar to bar collecting donations for the Just Food pantry in Lawrence. 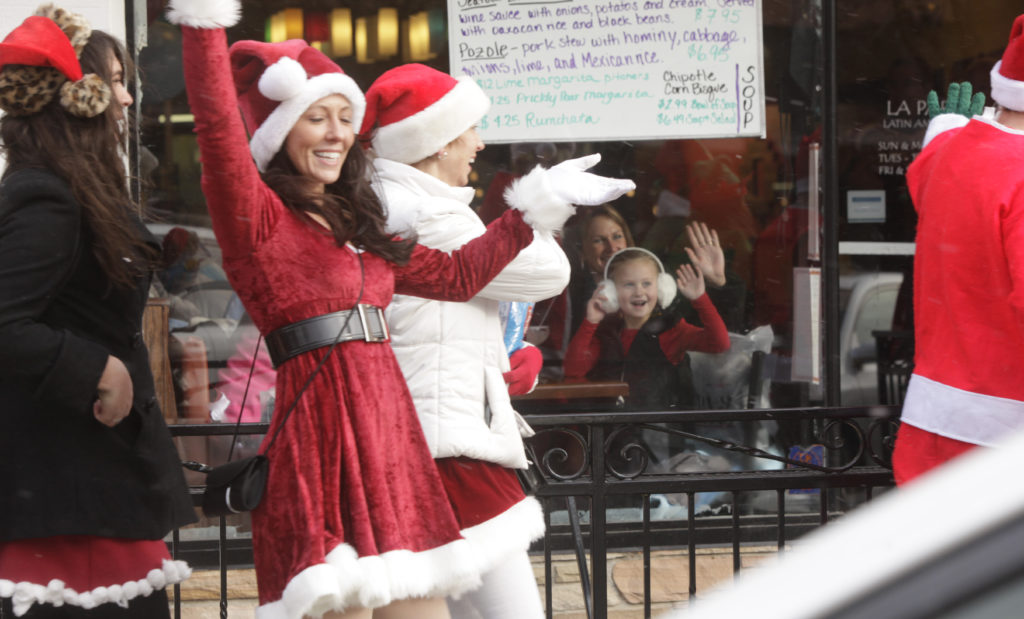 Paige Donnelly and her mother, Patty Donnelly, wave as a mass of Santas walk through downtown Lawrence on Saturday.

Santa made a surprise visit to Lawrence yesterday afternoon, but he wasn’t stopping in residents’ family rooms. His first stop: The Sandbar.

However, Santa wasn’t alone on his journey. More than 30 other Santas joined in for Lawrence’s first ever SantaCon.

According to its website, SantaCon is a gathering of people dressed in Santa Claus costumes parading publicly on streets and in bars in cities around the world. Basically, it is a pub crawl for Santa.

The Lawrence Santas made their way downtown Saturday afternoon, hitting up six different bars, starting with The Sandbar, 17 E. Eighth St., and ending at the Barrel House, 729 N.H.

Santa look-a-likes stood on the bar and line-danced to “Mambo No. 5,” “Car Wash,” “Shake a Tail Feather” and “Macarena.” Instead of eggnog, they downed banana shots and Guinness.

Some even put a twist on the traditional outfit. Besides the “standard” Santa, Hawaiian Santa, Elvis Santa and cowgirl Santa showed up, not to mention numerous Mrs. Clauses and elves.

“I’m short, so I went as an elf,” said one participant. “I figured there would be lots of Santas, and I had all the stuff at home for the elf.”

The rules of SantaCon were simple — don’t mess with kids, cops, security or press, and dress in holiday apparel. Therefore, no Santas would reveal their names for this story.

A lot of the costumes were either handmade or hand-accessorized. Elvis Santa said he heard about other cities like Seattle and San Francisco participating in SantaCon and thought it would be cool to organize in Lawrence. He said the No. 1 goal was to have fun.

“It’s all about fun and Christmas and coming together with friends,” Elvis Santa said. “Anything to do to promote the holiday spirit is a good thing.”

Spectators didn’t seem to mind. Jessica Chavez wasn’t expecting to run into a mob of Santas on her Saturday afternoon but said it was a pleasant surprise. In fact, it was the first Santa experience for her 4-month-old daughter, Saydie.

“This is the first time she has seen Santa,” Chavez said. “It definitely put a smile on her face.”

As they traveled from bar to bar, the Santas also collected food donations that will be given to the Just Food pantry in Lawrence.

“It’s a good cause and it’s an excuse to wear a costume,” said one Santa. “I think we are going to get a lot of looks — we’ve already had cars honking, people waving and amused laughter.”