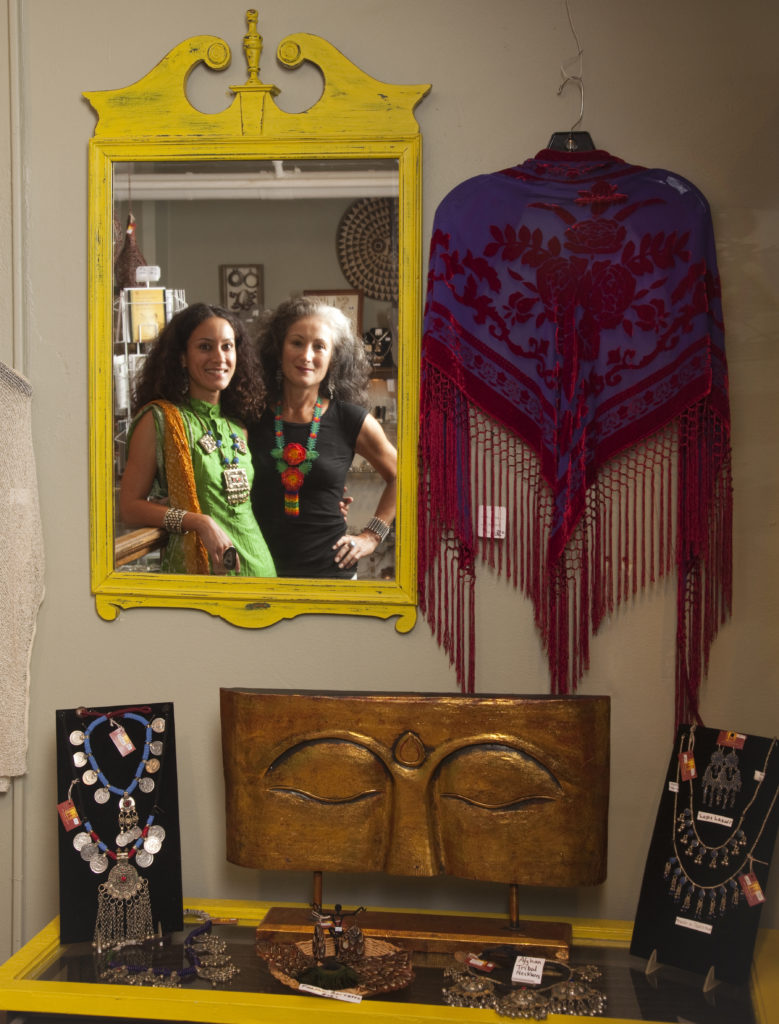 Alia Sachedina, left, took over the boutique shop Adorned, 5 E. Seventh St., her mother, Elizabeth Kurata, started 25 years ago. It used to be called African Adorned, one of the changes Sachedina has made.

When the time came for Elizabeth Kurata to retire from her imported jewelry business, African Adorned, she didn’t have to look far for the perfect successor.

The problem was, her daughter wanted nothing to do with it.

“I was adamantly against it,” says Alia Sachedina. “My mother had been trying to convince me to take it over for years, and I kept telling her, ‘There’s absolutely no way. You should sell. I’m not doing it.'”

Alia’s resistance was understandable. She had been working in the shop, 5 E. Seventh St., since she was 8 years old, butting heads with Mom the whole way.

“I didn’t enjoy working for my mom. I think I was fired twice,” Alia says. “It wasn’t until I had been traveling for some years that I started feeling ready. My mother wanted to give up the business, and I wanted to settle down, so I came home and took it over.”

Kurata handed over the keys, and the lease, to Sachedina on Dec. 31, 2006, but she didn’t give up control quite as willingly.

“It wasn’t a tidy, neat transition,” Sachedina says. “She helped me a lot, and I needed her help. But there were power struggles for the first couple of years.”

“When she changed the name (to Adorned), that absolutely surprised me. Because she didn’t discuss it with me, isn’t that funny?” she says.

Kurata continued to pitch in and offer advice, off and on, until late 2008, when her daughter flexed her “boss” muscle for the final time.

“That was the second Christmas I was helping and it was very stressful, because I was still marching around here like I was running the place. And, she fired me,” Kurata says, chuckling. “Or, let’s just say she gave me an extended leave of absence.” 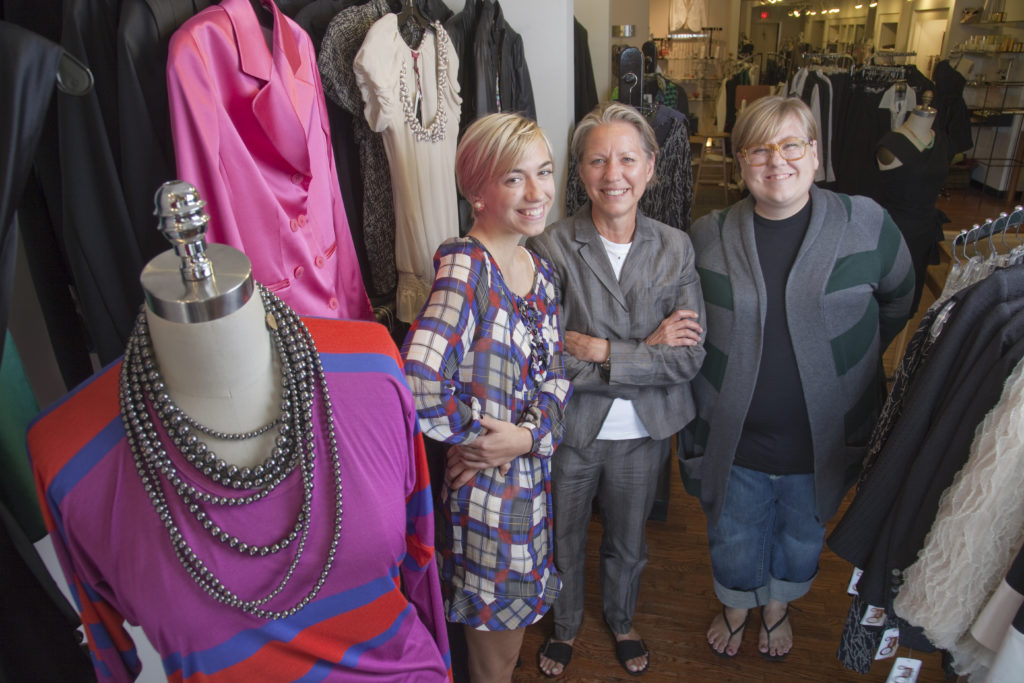 Kathy Swanson, center, works in the clothing business with her two daughters Alex, left, and Shauna.

Shawna Swanson, 29, spent 10 years in Los Angeles, working in the retail sector for Gap and Disney, before asking her parents if she could come home and join the family enterprise.

They said yes, with a caveat.

“We told her she couldn’t displace anyone who already worked there, and she wouldn’t be getting paid in the beginning,” says Kathy Swanson, who owns Spectator’s, 710 Mass., and Hobbs, 700 Mass., in downtown Lawrence with her husband, Mark.

“I think it’s the hardest thing in the world to go into a business your parents own. It can set up difficult relationships between other employees and them. So, they better damn well do their job better than everybody else.”

Shauna Swanson rose to the challenge and now works side-by-side with her mother.

“My mom is probably one of my biggest resources,” Shauna Swanson says. “She really understands what retail is all about.”

Kathy says Shauna and her sister, Alex, 19, who works part-time in both stores, bring a vital quality to the business: youth.

“It’s important to have young people around us involved all the time, because we’re getting old,” she says.

Although Shauna can’t imagine a day when her parents wouldn’t report to work on Massachusetts Street, her dream is to continue their legacy one day, in her own fashion. It’s a dream her mother shares.

“I would love for Shauna to carry on these businesses,” Kathy says. “They would never stay the same necessarily, nor would we need them to. When she decides to take over completely, they’ll be hers because we trust her that much.” 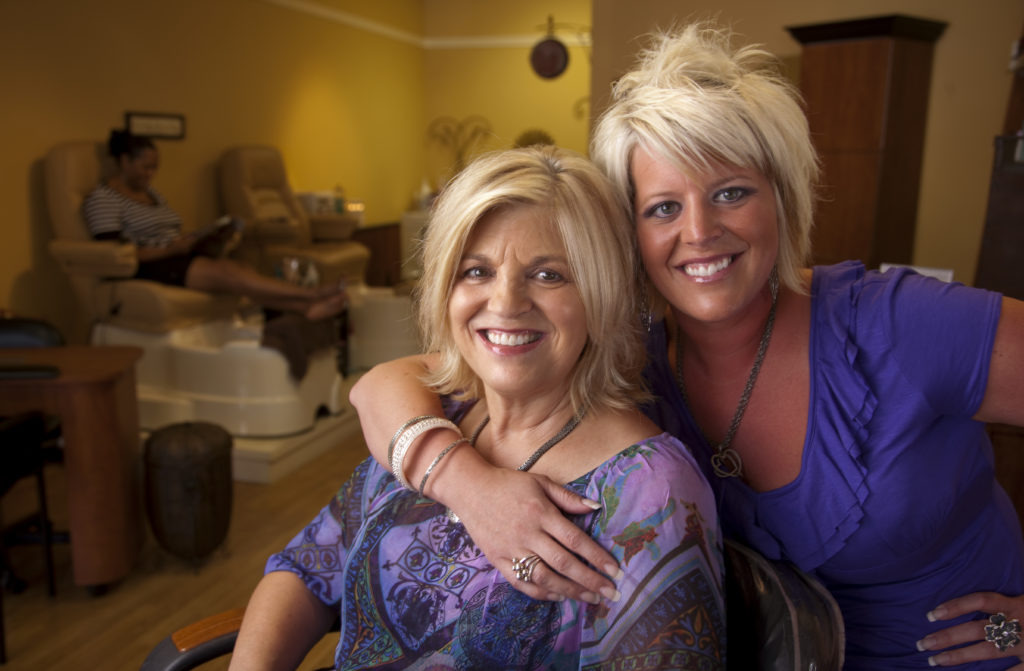 Mother and daughter duo Marcia Butell and Ashley Butell have been business partners for the past seven years and have recently moved Rejuvene Salon and Day Spa to 13 E. Eighth St. “To get good employees you have to get them at birth,” Marcia Butell says.

“To get good employees, you have to get them at birth,” says Marcia Butell, who works with her daughter, Ashley, at Rejuvene’ Day Spa, 13 E. Eighth St.

“I told her if she wanted to go to cosmetology school, she could move back home and I’d pay for it,” Marcia says. “After she finished, she went to work at J.C. Penneys for a while. When I expanded and bought a business on 27th Street, she came to me then. I was actually thrilled that my money was going to come back to me.”

Ashley says she and her mother provide different services to clients, so there’s little confusion or competition.

“I run the salon part — the hair and the nails, And she’s in the back with the facials, massage and body wraps. We pick up where the other one leaves off.”

There are times, however, when Mom can’t resist offering her two cents.

“She’ll try to tell me what color my hair needs to be, or my client’s, and I’ll say ‘That’s my job!'” Ashley says

Though there is no formal succession plan in place, Marcia is planning for her daughter’s future, should she want it.

“Everything I do in this business, I do so that she benefits. She knows that it would be a shame for me to work this hard and then decide to just close someday. I would like for her to carry on when I retire.”