Word nerds: They’re out to rid the world of typos 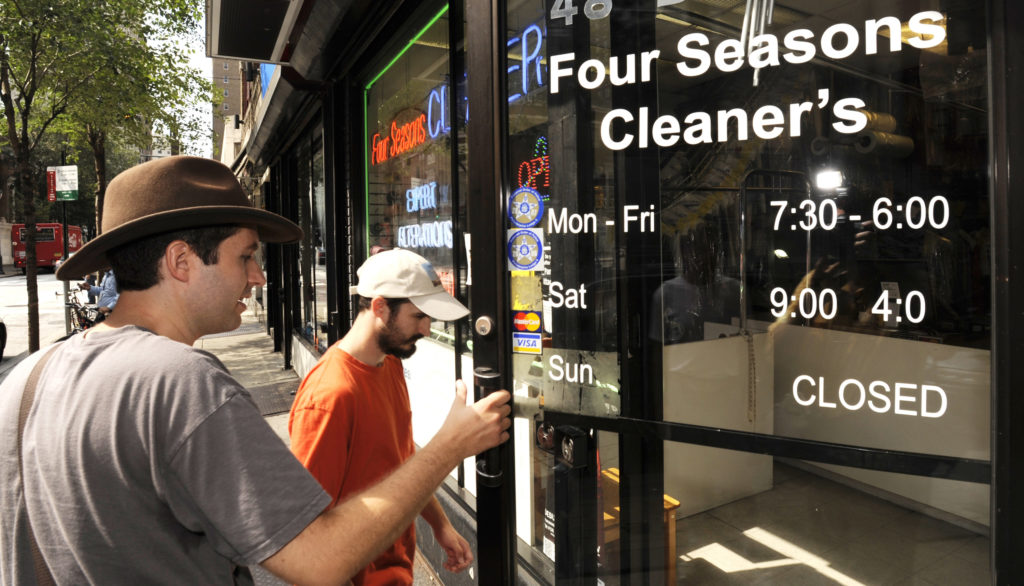 Jeff Deck, 30, holds the door for Benjamin Herson, 30, two word nerds and earnest agents of TEAL — Typo Eradication Advancement League — as they enter a dry cleaning establishment on 19th Street in Philadelphia, to ask if they can remove the erroneous apostrophe in the name. The name of the dry cleaners should read Four Seasons Cleaners. 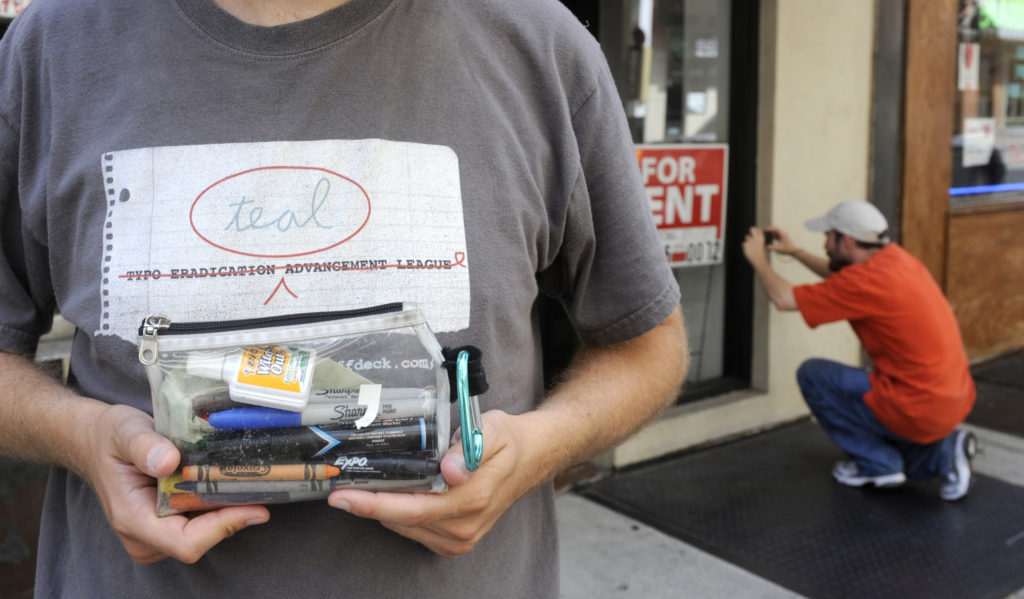 On 19th Street, at the Four Seasons Cleaners, they noticed the word cleaner’s uncalled-for apostrophe on the door of the establishment.

With permission from owner Mee Kim, Deck used his fingernail to peel off the superfluous apostrophe, a feat that would have made him beam triumphantly if he were inclined to beam.

A few doors down, a sign in the window of All About Hair advertised “5 hairstylist.” Deck, carrying his trusty Typo Correction Kit (a makeup bag filled with correction fluid, permanent markers, chalk and Sharpies in various colors), offered to pluralize the word with an “s,” but hairstylist Rita Riccelli declined.

“Somebody told us it was spelled wrong, but I’d rather you come back when the boss is here,” Riccelli said. She promised to bring it to his attention.

On 18th Street, at the Wrap Shack kitchen and bar, among the specials on a chalkboard out front, Deck and Herson spotted “chicken caeser.”

“Would you mind if I fixed it?” Deck asked manager Juana Quiroz politely.

With a bemused smile, she consented, and she even offered some chalk. Deck carefully changed the last “e” to an “a.”

“Most people are hesitant to do something about typos,” he declared, looking satisfied, “but the world is more malleable than it might seem.”

Deck and Herson were in town Aug. 16 not only searching for typos but also promoting “The Great Typo Hunt: Two Friends Changing the World, One Correction at a Time.” (Crown Publishers, $23.99). It chronicles a 10-week road trip around America in the spring of 2008 during which Deck, Herson and other TEAL disciples attempted to rid America of typos, spellos, “prepostrophes” and other egregious mistakes, inconsistencies, transpositions, solecisms and symptoms of “the creeping menace of carelessness.”

“I wanted to make some positive difference in the world,” says Deck, explaining his motivation for the trip. “How could I do that? What is my special skill? And the answer I came up with is, I could spot typos wherever I roamed. I’ve noticed them all my literate life.”

Deck, 30, of Portsmouth, N.H., recruited Herson, also 30, of Beaverton, Ore. They had met years earlier in a creative-writing class at Dartmouth College and later roomed together when they worked in Washington, D.C.

“When Jeff called and talked about a road trip, I didn’t totally process the typo part,” Herson recalls. “Then he started his blog entries and I realized he was serious — he really was hunting typos every day. At first, I was glad I could find and correct them as well, but it was the stuff underneath the typos that got me curious.”

To wit: Why are so many Americans prone to misspelling, so ignorant of basic rules of grammar and punctuation?

Examples were plentiful. The duo began their trip in New England and journeyed south, before heading west, then up the West Coast and across the upper Midwest back to New England.

On their first tour, they skipped Philadelphia but did stop in Lansdowne, where they saw, and corrected, signs in a supermarket offering “beefstake” tomatoes and “pomegranite” juice.

They fixed “bread puding” in Rockville, Md., “souveneir mugs” in Las Vegas, and “dillettante chocolate” in Seattle. Near Flagstaff, Ariz., they spotted a billboard urging “BRING YOUR CAMERA’S.” That was enough to impel them to exit the highway and turn around. After vaulting a barbed-wire fence and weaving between sagebrush and cactus, they reached the offending billboard, where Deck chalked out the apostrophe — “bigger than my hand,” Herson says.

On the Canadian side of Niagara Falls, as the TEALsters were whiting out the extraneous apostrophe in “palm reading’s” (“probably the most common type of mistake,” Herson says), two thugs approached and warned, “Walk away now or you won’t be able to walk again.”

“That’s the only time we were physically threatened,” Deck says. “Maybe they were part of some apostrophe-preserving gang.”

In Galveston, Texas, they encountered evidence of another phenomenon — “a sign that used to be correct but that someone had changed to make incorrect, usually in a profane way.” In this instance, someone had erased the initial “C” in Canal City.

The frequency of the phenomenon led the duo to posit the existence of FLAME — Fiendish League for Advancing Mistakes in English.

On the south rim of the Grand Canyon, they fixed two errors on an ordinary-seeming sign about artwork on a faux American Indian watchtower. The Park Service, which regarded the sign as historic, was not amused. The TEALsters were later summoned to court, charged with defacing federal property, and ordered to pay $3,000 in restitution. They were also banned from national parks for a year.

The experience ended the practice of “stealth corrections” and “covert alterations” and led to the formulation of the “Third Rule of Typo Hunting” (Don’t Be a Jerk) and such corollaries as Always Ask Permission and Be Courteous and Deferential.

All told, the TEALsters found 437 mistakes during their Great Typo Hunt and corrected 236.

“It’s a universal truth that everyone makes mistakes,” Deck says, “and there are mistakes everywhere you go in the United States.” No region was more mistake-prone than others, but neighborhoods with more independent businesses were “more likely to need typo-eradication assistance.”

One of the big surprises: “the richness of the conversations” provoked by TEAL’s mission.

“Everyone seemed to have a typo story,” Deck says. “A simple conversation about a misplaced apostrophe could open up whole other vistas of topics about the way people communicate, and relate to each other in the workplace.”

Tolerant of slang, lenient toward non-native users of English, determined to amend the error rather than shame the perpetrator, they tried to steer a middle course between the “grammar hawks” and “grammar hippies,” the prescriptivists and descriptivists. Telling patterns in spelling mistakes, particularly “double-letter issues” (“dinning” instead of “dining,” “shiping” instead of “shipping”), have convinced them of the virtue of phonics-based reading instruction.

The guerrilla grammarians of TEAL hope to inspire others to follow their lead. In the meantime: “Take a second look at your text,” Herson exhorts. Proofreading something you’re about to share with the world is a matter not only of clarity of communication but also common courtesy.

As Deck writes in the book: “To some extent, we are our own text — erroneous signs confer their blemishes on their very owners.”