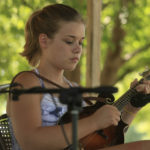 Cara Oliphant, 18, of Chanute, works her fingers on her mandolin during Sunday’s Kansas State Picking and Fiddling Championships in South Park.

Shade was a hot commodity for musicians and music lovers alike Sunday afternoon in downtown Lawrence.

Nearly 100 musicians and hundreds of fans turned out at South Park for the 30th annual Kansas State Fiddling and Picking Championships.

Camped out under trees to avoid the hot sun were musicians of nearly all stringed disciplines. Fiddles, guitars, mandolins, banjos and basses rang out from all corners of the park. While the main competitions were taking place on two stages, many musicians banded together and started impromptu jam sessions on the side.

Russ Osterman, McLouth, drove in to spend time with numerous friends at the event. A guitar player of eight years, Osterman said he was enjoying the day of music.

“Sometimes playing on the side can be more fun,” he said. “It matters less when you mess up.”

Music lovers of all ages settled down on blankets or in lawn chairs to take in the varied playing styles of the participants.

Carol Malecki, Topeka, was one of the few people sitting in the sun as she listened to a group perform on the south stage. Malecki, who’s attended the championships off and on for a number of years, said she enjoyed the atmosphere of the event.

“They’re just playing for the music,” she said. “It’s always great to see any event the whole family can go to.”

Event coordinator Gayle Sigurdson conversed with players and the audience while trying to keep the nine contests and four concerts on schedule. Sigurdson said this year’s event had more participants than usual, an important factor in the event’s success.

“It’s a great turnout, especially considering the heat,” she said, referring to the 90-degree weather. “The point of fiddling and picking is that music is a participation sport.”

With the open and relaxed atmosphere at the event, music enthusiasts were able to mingle with musicians and vice versa.

“What we want people to understand is it’s not a separation between ‘he’s a musician and I’m not’,” Sigurdson said. “It’s that music is part of the community.”