Deer crashes through window at Weaver’s 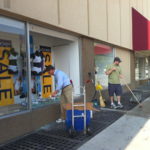 Weaver's vice president Earl Reineman, left, cleans up broken glass with the help of an employee after a deer jumped through a display window at the store, located at 901 Massachusetts St., early Monday morning.

Lawrence Mayor Mike Amyx — who, of course, also doubles as one of the town’s downtown barbers — was clipping hair about 7:30 Monday morning. That’s when he saw a rambunctious, young, six-point buck deer making good time down Massachusetts Street.

A bit surprising, although Amyx swears his customer’s ears are both fully intact. What came next, though, was odd for even a Monday morning in downtown.

Which display window? Well, of course, the one with the fine brassieres and other female undergarments that are enough to make the antlers of even the strongest buck twitch just a bit.

“We don’t know exactly what happened, but we think the deer saw the sale banner in the window and couldn’t wait for the store to open,” said Earl Reineman, vice president with Weavers. “But seriously, we hope the deer is OK.”

That was uncertain on Monday. After removing itself from the display, the buck ran nine blocks or so to the 800 block of Alabama Street where it holed up in a fenced back yard. Homeowner Rich Garrett said the deer was bleeding significantly from its shoulder and one of its antlers appeared broken.

Animal control and police officers responded to the scene, and requested assistance from the Kansas Department of Wildlife and Parks. But while the Lawrence officers were waiting for KDWP to arrive, the deer became spooked and escaped. It was heading north toward the Kansas River, and officers chose not to pursue him. No other calls regarding the deer were reported to police.

Sgt. Matt Sarna, a spokesman for the Lawrence Police Department, said animal control officers are not equipped to tranquilize a deer. He said police officers also generally do not shoot wild animals unless it is clear the animal is posing an immediate danger or is so badly hurt that it clearly will not survive.

Garrett watched the deer scurry in his backyard for 15 to 20 minutes. While he is no deer psychologist — although an occasional deer hunter — he does have an idea about what happened.

“I know that they get scared real easily and when they feel trapped or lost, they kind of make rash decisions,” Garrett said.

Back at Weaver’s, Reineman is only certain of one thing.

“It is,” he said, “the strangest broken window case we’ve ever had.”