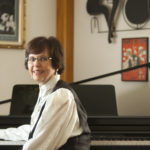 Lawrence resident Nora Hulse, who has been playing piano almost all her life, says she began playing by ear when she was 3 years old. Currently she performs with the Turpin Tyme Ragsters in Kansas City.

“Music has been my vocation and avocation since my childhood in Clay Center, Kansas, a very musical town of about 5,000,” says Nora Hulse, retired music professor, performer, writer, researcher and advocate of female ragtime composers.

Hulse’s mother, a graduate of Chicago’s American Conservatory of Music in the 1900s, taught her piano when she was 4 years old, and pipe organ and violin when she was a teenager.

“I loved hearing my mother teach piano and organ and decided that’s what I’d like to do, too,” she says.

When Hulse’s mother taught her how to teach, she discovered playing music didn’t come naturally to everyone.

“Not everyone is talented, and many of those who are didn’t want to put in the practice hours required to be really good,” she says.

Besides teaching classical piano, Hulse played violin in school orchestras, percussion in bands and was in demand as a piano/organ accompanist.

A whole new musical world opened up when she listened to the hit parade on Saturday night radio.

“I loved the music and wanted to play it, but my mother discouraged me,” she says.

“I’ve always been able to play by ear, so I played boogie woogie on the school’s grand piano while my friends gathered around,” she says.

It marked the beginning of a lifetime juggling jazz and classical music.

After studying at the Interlochen national music camp in Michigan, the Kansas City Conservatory of Music and a brief stint at K-State University, Hulse moved to Columbia, Mo., in 1968 and met her husband, Mark.

“He was playing tenor banjo and trombone at Shakey’s Pizza Parlor, and before long I began my career as a ragtime/early jazz pianist,” she says.

Hulse married in 1969, graduated from the University of Missouri with a Bachelor of Science in music education in 1973, a master’s in music performance in 1976, a master’s in pipe organ performance in 1979 and a doctorate in music curriculum and education in 1988, studied harpsichord at the University of Michigan and Southern Methodist University, and became a full-time music professor at Central Methodist College, Fayette, Mo.

She and Mark performed ragtime for 15 years on “Pepper and Friends,” a live talk show broadcast on KOMU-TV, and she continued working as a freelance full-time accompanist and percussionist for the Missouri Symphony Society during summers.

In the early ’80s she started to collect ragtime sheet music by female composers and started extensive research into the women’s lives. She’s located over 400 pieces, has produced four CDs and companion music folios of women’s rags, and recently produced a fifth, “Mostly Ragtime.”

She and Mark, known as Ragtime Razzmataaz, have performed at ragtime societies and jazz banjo festivals all over the country. You can hear them move the rafters when they play with Junkyard Jazz at the American Legion on Thursday evenings.

“Music keeps us together as a couple,” she says.

“We each have our areas of interest and do lots of things separately but share our passion for music, and love playing together and entertaining people.”