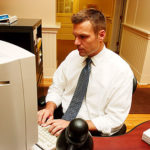 Kris Kobach engages in an online chat with ljworld.com readers in this 2004 photo. Kobach helped write a new immigration law in Arizona that has civil rights groups up in arms.

Topeka ? The new immigration law in Arizona, which has caused an uproar among civil rights groups, has a Kansas connection.

Kris Kobach, a law professor, former chairman of the Kansas Republican Party, and a GOP candidate for secretary of state, helped write the law.

“I believe in the cause,” Kobach said.

The law, which takes effect this summer in Arizona, would make it a crime under state law to be in the U.S. illegally, and it directs state and local police to question people about their status if the officer suspects they are illegal. People who are unable to produce documents showing they are legally in the U.S. could be arrested, jailed and fined.

The law has been roundly criticized by civil rights advocates who say people who look or sound foreign will be forced to repeatedly confirm their citizenship.

Kobach described the law as “reasonable and measured” and said criticisms of it have been in error.

He said part of the law says police may not use racial profiling. He said a typical situation where the law would be used is where an officer stops a vehicle for a traffic infraction along a known smuggling corridor and a large number of people are in the vehicle, no one has identification and the driver acts evasively.

“All those factors combined would constitute reasonable suspicion,” he said.

As an attorney, Kobach has long been involved in battles targeting illegal immigration.

He said the Arizona law’s author, state Sen. Russell Pearce, a Republican, asked for his help in drafting the measure.

“I have an expertise in this area,” said Kobach, adding that he provided the assistance for free.

Kobach said he didn’t believe his involvement in creation of the law would have any impact on running for secretary of state. He said if elected secretary of state, he would help draw up a similar bill in Kansas only if asked by a state legislator and if he had some spare time.