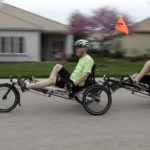 Dr. Charles Yockey and his wife, Nancy, ride their recumbent, tandem tricycle down a residential street. The Yockeys ride as often as they can in the evenings, and usually cover about 20 miles in two hours.

Lawrence and Douglas County are home to many avid cyclists, who may ride contraptions with one, two, three wheels or more.

Some people ride bicycles out of necessity, while many others use them for exercise and recreation. They are so common that they rarely draw a second look.

That’s not the case for Dr. Charles Yockey and his wife, Nancy, though. They tool around town in a recumbent, tandem tricycle, which draws many curious stares.

“People are just amazingly friendly,” says Nancy Yockey. “But then you sort of get this ‘what was that,’ because they realize I don’t have the front wheel like he has.”

Charles, a hospitalist at Lawrence Memorial Hospital, and Nancy have been bicycle enthusiasts their entire lives. They decided to take up riding again a few years ago but, in their mid-60s, they weren’t as comfortable as they used to be on a regular bicycle.

Both say their lives changed when they discovered the delta tricycle, which has two widely spaced wheels in the back.

“They’re especially good for people as they mature because you can’t fall off and you can get excellent exercise here from the 15th of March until the end of October,” Charles said. “It’s great for anybody with any back problems or knee problems or hip problems, and it’s good aerobic exercise.”

He recommends the trikes for older people who want to stay active and enjoy the outdoors.

The trikes can cost anywhere from $900 to $4,000 depending on the model. The Yockeys purchased two middle-of-the-line trikes that can be ridden independently, or hooked together for a tandem ride.

Charles said the tandem tricycle is different from a normal tandem bicycle, though. Each trike pedals independently so while both riders are contributing to the effort, they don’t have to be of the same physical endurance level to ride.

Charles said the world record for delta trikes hooked together and ridden is 187. If there’s ever an attempt to set a new record, he said, he and Nancy want to be part of it.

The Yockeys head out on their trikes just about every free evening they have. They typically ride about 20 miles in two hours, and agree that the activity keeps them both healthy and their marriage strong.

At least until one quits pedaling up a big hill, Charles said: “The most common question between the two of us while we are riding is ‘are you pedaling back there?'”