Jane Imber — Special to the Journal-World 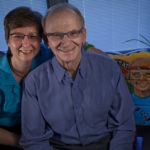 Don “Red Dog” and Beverly Gardner are the winners of the annual Seaver Award from Douglas County Senior Services. The Gardners are being recognized for their community service and organizing and running the Dog Days workout program.

Each is the perfect complement to the other.

“Don likes to be in the middle of the party. Bev likes to sit back and watch,” said Randy Glidewell, longtime friend of Don “Red Dog” and Beverly Gardner.

Drop by The Dynamite Saloon, 721 Mass., and you’ll notice two spots reserved for “Bev” and “Red Dog.” It’s one of many recognitions Don and Beverly Gardner have received for their efforts on behalf of the Lawrence community.

And on April 29, the Gardners’ longtime commitment to Lawrence will be recognized with the Jim and Virginia Seaver Award given by Douglas County Senior Services.

The Gardners are best known for organizing and running Dog Days, a community workout program. Now in its 27th year, Dog Days has become a year-round fitness program available at no charge to anyone willing to participate.

“I appreciate and admire that not only do they selflessly spearhead a community exercise program, they are also huge supporters of agencies in the community,” said Jim Lewis of Checkers grocery store and a Dog Days participant. “They really walk the talk.”

Dog Days is all about fitness — and fun.

“You just have to come up and have fun,” Don said. “Don’t think of it as a gym atmosphere. It’s not just hardcore athletes. It’s for everybody.”

One of the many highlights of Dog Days came last July, when more than 2,750 people turned out to exercise with Red Dog and set a record for the world’s largest community workout. There’s an opportunity to go for the record again in June 2010.

“Beverly and I are a little stupid,” Don said.

“We don’t know how to quit.” Beverly added. “All of it comes together because of all the people who volunteer. It feels like I have a large, extended family.”

Besides, Don said with a laugh, “Dog Days is good for the economy. … Afterwards we go to coffee shops, restaurants and bars.”

Probably the couple’s favorite memory is the three marriages that got their start at Dog Days. Among them were Randy and Catherine Glidewell, who started dating after meeting at Dog Days in summer 1999. The couple married in 2001.

Don’s been a Lawrence resident nearly all of his 71 years. He moved here from Columbia, Mo., when he was 3.

“Mom usually lived a block or so away. She gave me a lot of love, but she was in a rooming house and did shift work,” he said.

As a result, he spent time in foster homes until he was 9. His junior high coach nicknamed him “Red Dog” because of his red hair, and the name stuck. After graduating from Lawrence High School, he attended college and joined the U.S. Marine Corps.

After returning to Lawrence in 1975, he began his career in law enforcement. After he left the Lawrence Police Department, Don hardly stopped working. He’s held a variety of jobs and currently works for the KU athletic department making sure athletes are attending classes.

Beverly, 54, is a lifelong Lawrence resident and works for Douglas County. Don was the police officer on duty in the early 1980s when Beverly went to the police department with a complaint. The couple dated for a few years but then decided to break up. Ten years later they were back together. The couple married in 1995.

And now they’re a driving force in the community, spurring people to get up and get moving during Dog Days workouts.

“But,” Don said, “Beverly holds it all together.”

And what’s in the future for Dog Days?