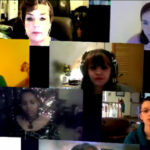 What’s the hardest part about being in a musical group? Frequently, it’s trying to get everybody at the same place at the same time.

A new music video that has become a sizeable hit on YouTube has found a way around that problem. And it’s a collaboration that boasts roots in Lawrence.

The project is called “Lux Aurumque” by Eric Whitacre, an acclaimed American composer based in Los Angeles. Whitacre began by taping a silent video of him conducting the a capella piece. Then he put out the word asking people to download his free sheet music and submit webcam videos of themselves singing their specific part.

Enter recent Lawrence resident Scott Haines, who took these hundreds of disparate submissions and pulled them together into one visual and audio performance piece. The completed result of this “virtual choir” is astonishing — a haunting collage of international voices culled from 12 different countries.

“The greatest issue of all was hardware and software capabilities,” says Haines, who created “Lux Aurumque” using the Adobe After Effects CS4 software. “Although I had just built a new state-of-the-art computer, running 243 tracks of video all at once was still nearly too much.”

In merely two weeks since its release, the video has logged more than 430,000 views on YouTube and been featured on CNN.

It was a chance meeting in Lawrence that first led to the project.

In February 2008, Whitacre came to Lawrence to work with Kansas University’s Chamber Choir and musicians from Lawrence and Free State high schools. Haines — a Wellington native who moved to Lawrence in 2005 — went up and introduced himself to Whitacre during an event held at the Lied Center. By May of next year, they were collaborating on the virtual choir.

While “Lux Aurumque” was composed by Whitacre, the poetry (written by Edward Esch) that was the basis for the words were translated into Latin by Lawrence resident Charles Anthony Silvestri, a history teacher at Washburn University.

“As you can imagine, the vast majority of viewers have been beyond amazed by the production and watch it over and over again,” says Haines, who moved to Australia in February.

The 22-year-old says he’s been particularly flattered by the number of video professionals and college professors who’ve wondered how he could coordinate such a complicated, ambitious project on his own. Most are also wondering what is next.

“In response to the video, there has been a numerous amount of requests to join the next chorus,” Haines says. “Judging by the number of e-mails and comments I have received from people wanting to join, the next chorus could be anywhere from 400-600 tracks.”

Fortunately, in cyberspace there is an infinite amount of room on the risers.

— Entertainment editor Jon Niccum explores facets of pop culture that have established a unique niche on the Internet. He can be reached at 832-7178.