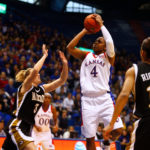 KU's Danielle McCray (4) pulls up for a jumper in front of Missouri's Amanda Hanneman (3) during the first half of the game on Sunday, Jan. 17, 2010, at Allen Fieldhouse.

The primary emotion running through Danielle McCray when the Connecticut Sun made the former Kansas University standout the No. 7 overall pick in the 2010 WNBA Draft?

“It’s nice to just not worry anymore,” McCray said, minutes after being informed of her selection in Secaucus, N.J., site of the draft. “This whole time you’re here, you’re just worrying about where you’re going to go. But it feels good to just relax.”

McCray’s primary reason for concern in the weeks leading up to Thursday’s draft stemmed from an anterior cruciate ligament injury she suffered Feb. 4 that will prevent her from playing in the upcoming WNBA season and thus threatened to significantly hamper her draft prospects.

She said last week she figured the injury would affect where she was taken in the draft, and multiple league analysts backed up that sentiment during a pre-draft conference call March 31.

In the end, though, there proved to be little reason to worry.

The Sun, who entered the draft with the No. 1, No. 15 and No. 27 picks, traded guard/forward Amber Holt and center Chante Black to the Tulsa Shock on Wednesday in order to secure the No. 7 pick in the draft, which was eventually used on McCray.

“Had she been healthy, Danielle would have been a top-four pick in the draft,” Sun coach Mike Thibault told OurSports Central. “She can play the 2 or 3 positions. She’s a terrific scorer and a tough kid who we are quite willing to wait a year for.”

McCray’s selection Thursday makes her the highest-picked player in KU’s history (Lynn Pride was also taken seventh, by the Portland Fire in 2000), though it didn’t come without a good dose of anxiety in the hours before.

“We were getting our hair and makeup done, and everyone’s asking, ‘Are you nervous?'” said McCray, who becomes the first Jayhawk drafted into the WNBA since Jaclyn Johnson was taken by the Orlando Miracle with the 42nd pick in the 2001 draft “And I was like, ‘No, not really.’ And then I got to the table, and it got to the fifth and sixth pick, and I started shaking. My mom’s hands were shaking. We all were shaking.”

Her selection also put the finishing touches on a storied collegiate career that will go down as one of the most successful in Kansas history.

Although she missed the second half of her senior season because of the ACL injury, McCray concludes her career ranked in the top 10 of nine categories — including fourth in all-time scoring with 1,934 points — and with a good deal of hardware.

Following the completion of her rehab, she plans to play overseas in the fall before returning to the United States for the ’11 WNBA season.

“It’s just a dream come true,” McCray said of her selection. “That’s how I’d sum up the whole thing.” 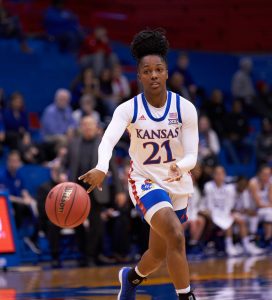