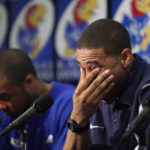 Kansas guard Xavier Henry has an emotional moment alongside his brother C.J. Henry, left, during a press conference in which Xavier declared his intention to enter the NBA draft, Wednesday, April 7, 2010 at Allen Fieldhouse.

Carl Henry, who was busy coaching his Athletes First AAU basketball players on Wednesday afternoon in Oklahoma City, was unable to watch his son Xavier’s news conference live on the Internet.

Carl — he was briefed on the proceedings by a Journal-World reporter — wasn’t surprised to learn the Kansas University freshman guard had tears in his eyes throughout a 20-minute session in which he informed a large media contingent he’d entered his name in the 2010 NBA Draft.

“That’s him. He loves all his coaches and teammates and isn’t afraid to show it,” Carl Henry said. “If you watch him during the games, he’s hugging his teammates all the time.

“He’s a people person who is very emotional. He loves everybody at KU and loved playing the game there.”

The 6-foot-6 freshman guard — he said he’s currently in the “interviewing process” for an agent, meaning he won’t be reconsidering his decision to turn pro — choked back tears while explaining how “tough” it was to leave college.

“I didn’t know I’d love it here this much at KU. All the people here … they really made it a place for me to love,” said Henry, KU’s second-leading scorer at 13.4 points per game.

“How big they (Jayhawks) are in basketball … the relationships you can build in just one year that you have to give up … playing in this building (Allen Fieldhouse) … there’s nothing like it. I love what my coaches did for me and my teammates and the fans. Everybody who supported KU made it real worthwhile for me to come play here.”

Henry — he was seated at a table next to his brother, C.J., who plans on returning to KU for a sophomore season, and coach Bill Self — said people who know him well, “knew it’d be a tough decision because they know I love people and they know once I start bonding with people it’s real hard for me to let go.

“The people on the outside looking in … they probably had no idea what I was thinking.”

Xavier said a possible NBA labor dispute after the 2010-11 season did not send him packing to the pros after just one college season.

More than anything … “I think coach Self prepared me as well as he can,” Henry said. “He kept me confident throughout the whole season, even when I went through slumps and he got my mindset ready to play with anybody. I’m confident going in (NBA) and I want to go in there and I want to kill it.”

Henry said in “interviewing agents, going through the whole process, just recently it came up in my mind, ‘If I’m going to go for it, I’ve got to go for it with a full head of steam. I’m not going to hold back,'” noted Henry, who said he’d take an aggressive mindset into individual workouts with NBA teams.

As to far as where he’ll be selected …

Carl said he’s also heard his son is a definite first rounder, and Self would not argue with that.

“A lot of guys are declaring. Workouts are really important for them to probably determine that (exact position),” Self said. “I think he’ll be a good player. There’s so many guys out there that play that don’t have a position. He’s a 6-foot-6 two-guard. He’s a guy you can put in the corner if they double team the post. He can shoot the ball out of rotation.

“For a freshman, I thought he got pretty good defensively. He doesn’t play to his athletic ability as much as I want, but they can teach him to do that. His ball skills are good and are going to get better. He’ll have six hours a day to work on them. He’s scratching the surface.”

Self said it was not a “sad day.” He said he was happy for Henry, who, Self said, will pass 36 hours of course work this school year, when he could have abused the system and taken just six hours total.

“I can’t imagine there being one negative thought about anything with X other than they (fans) feel like they’ve been cheated because they’d love to see more,” Self said. “That would be strictly from a fan-selfish standpoint as opposed to looking at it from their family’s eyes, which was totally unselfish.

“I told X this,” Self added, “if my son would grow up and be like him from a spirit standpoint and a heart standpoint, then my wife and I would be ecstatic because he has about as good a spirit and as good a heart as any kid I’ve ever coached.

“I’d put four years in recruiting Xavier if we could get him (again) because I know what kind of kid he is.

“I don’t think you can build a program on one-and-done guys because the turnover would be too great. I do think recruiting a guy like him … we wouldn’t have been 33-3 this year if he hadn’t come to Kansas. He was very good to us.”

Xavier said the year helped him “grow up like a man” and he “wouldn’t change anything.”

“I wish they had a rule where he could have gone right away,” Carl said of his son heading to the pros after his senior year at Putnam City (Okla.) High. “But those are not the rules. He followed the rules. Now he can go. He is well-prepared. The last two years have prepared him for this. His body is ready for the next level. His game … he doesn’t rush the game. He lets things come to him. I think he’s ready for this.”

As far as where he’ll play next season?

“A perfect draft spot is any spot in the draft,” Xavier said with a smile. 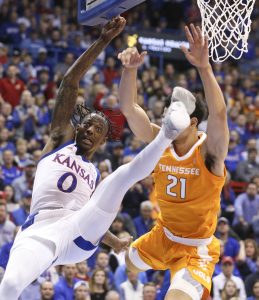 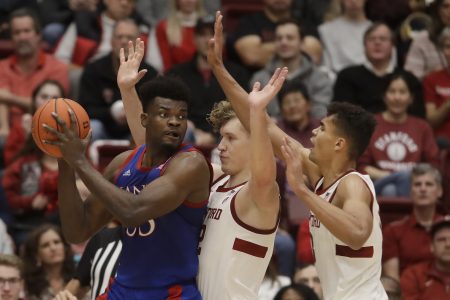