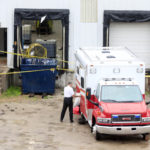 A spokesman for Occupational Safety and Health Administration confirmed the agency has an investigator in Lawrence looking into the incident that killed two workers, Roy Hillebert, 51, Eudora, and Brandon Price, 25, Lawrence.

Read more about the MagnaGro accident

Men killed at MagnaGro: One a ‘hero,’ other was Iraq vet, loving son

Cane molasses not dangerous except in tragic, specific confluence of circumstances

OSHA has about six months to complete its investigation of such a case, said Michael Moon of OSHA’s Wichita office. He said MagnaGro has no previous violations on file with OSHA.

While the U.S. Environmental Protection Agency has not yet entered the investigation, an agency spokesman said Friday that it definitely would launch its own probe.

“We are interested in coordinating with OSHA,” said Mike Burnett, special agent in charge of criminal investigations for the EPA’s region 7.

MagnaGro, which formulates chemical fertilizers for nationwide resale, has a history with the EPA. In September 2007, the agency alleged that general manager and owner Raymond Sawyer and the company were discharging waste from the fertilizer operation into the city’s sewer system, using a hose inserted into a toilet. Investigators determined the company had been doing that for 10 years. In February 2009, Sawyer pleaded guilty in federal court to illegally discharging the waste and later was sentenced to five years of probation for the misdemeanor offense. He and the company also were required to pay a $240,000 fine.

In addition, Lawrence fire and medical crews responded to an accidental spill at MagnaGro. According to the fire and medical department, MagnaGro employees were transferring a chemical — a plant growth activator called phypogroxtra — from one tank to another when a leaky valve lead to the spill. The chemical was washed into the street, where a passerby who saw it reported it to authorities.

And in October 2009, crews responded to another spill. At that time, fire and medical officials said 200 to 250 gallons of fertilizer-like material leaked from a tanker truck into a nearby ditch.

On Friday, the EPA’s Burnett stressed that the agency isn’t aware of any violations involved in the latest incident.

“We are interested,” he said. “It is shocking to me that this facility has had more issues. It is sad that two folks have died as a result of whatever happened. So we are definitely going to coordinate with the other agency and find out what happened.”

Burnett said when the EPA investigated MagnaGro several years ago, officials went to the plant with a search warrant.

“When we went in there you could tell the place was very pretty much run down,” he said. ”I don’t know what has happened since our case. We haven’t had any dealings with them. This is the first I have heard about the plant since our investigation.”

The accident also remains under separate investigation by Lawrence police and fire and medical officials, according to Mark Bradford, fire and medical chief. The cause of the men’s death is pending autopsy results.

Emergency crews responded Thursday afternoon to MagnaGro, near 22nd and Delaware streets, where they were told two people had fallen into a tank containing an unknown substance, according to Mark Bradford.

Bradford said the substance wouldn’t normally be toxic, but because of the close quarters inside the tank, it was harmful. One employee was pronounced dead at the scene and a second one died at Lawrence Memorial Hospital. Another worker was treated at LMH and released on Thursday.

Jeff Novorr, vice president at Lawrence Memorial Hospital, said Thursday that chemical residue left by an ambulance that had been at MagnaGro contained about 80 percent cane molasses. Novorr said cane molasses — when in a poorly ventilated area — converts to carbon monoxide.

After responding to the emergency call Thursday afternoon, crews from Lawrence Douglas County Fire and Medical entered the building in HazMat suits and were washed off by other firefighters when they exited the building. One firefighter was treated and released from LMH with respiratory injuries. And a third person inside MagnaGro was treated and released Thursday from Lawrence Memorial Hospital. They were not identified.

Since 2004, the Kansas Department of Health and Environment has responded to four chemical spills at the plant, KDHE spokesman Kristi Pankratz said. The first spill was in January 2004 for the chemical humaid. In January 2008 and again in March 2009, the chemical phypogroxtra was spilled. The last spill was reported in October 2009 involving the chemical restorextra.

The KDHE is not investigating Thursday’s accident, Pankratz said.