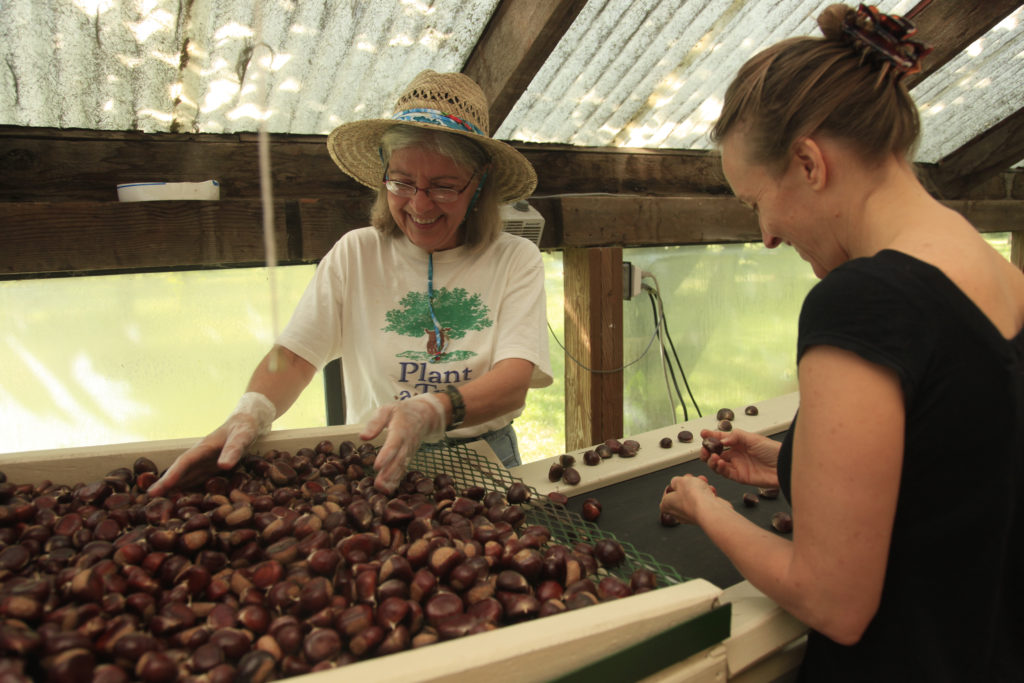 Sorting through this year’s crop of chestnuts, Debbie Milks, left, and Tina Haladay look for bad nuts at Chestnut Charlie’s, 1840 E. 1450 Road. Workers are already picking through rows of trees as harvest came early this year.

• To roast fresh chestnuts, cut a shallow slice through the skin, place the nuts in a covered pan and bake in the oven at 375 degrees until the chestnuts are tender.

• Baking takes about 20 minutes, depending on freshness and the size of the chestnut.

• Chestnuts can also be roasted on the stove top on medium heat in a heavy pan, on a barbecue grill, for one to two minutes in the microwave, or in an old-fashioned popcorn popper in the fireplace.

• Roasted chestnuts peel easier when they are still hot. Other recipes include seasoning them with salt after they cool. 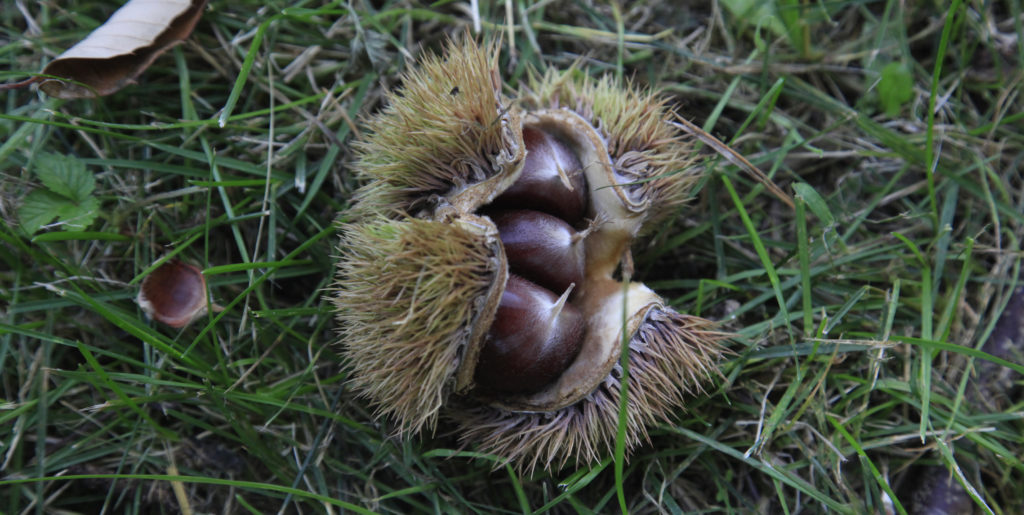 Ripened chestnuts have dropped to the ground at Chestnut Charlie’s north of Lawrence. This year’s crop appears to be a “pretty good” one, orchard owner Charlie NovoGradac says.

Christmas came early this year for the annual crowd of chestnut pickers.

“They are pretty good this year,” NovoGradac said of the crop as he prepared Wednesday morning to weigh the buckets that pickers brought in.

NovoGradac and Milks, his wife, said they are encouraged by the size of the chestnut crop this year. And workers and volunteers who spend time picking them say they enjoy going to work outside in the organic orchard, which is on U.S. Highway 24-59 southeast of the Midland Junction.

“You get a nice light breeze, and you have all the trees, all the scenery. It’s just a real nice, beautiful experience,” said Ryan Haggerty, who is spending five days a week picking at the orchard.

The work force is split between people who made it to the top of a list to work for essentially minimum wage, volunteer groups and people who come out to pick chestnuts on weekends to keep for themselves.

NovoGradac and Milks say the demand for paid positions has exploded this year because of high unemployment. They have tried to fit in new people.

But they also give preference to pickers who return often because they are experienced and dependable. The orchard has to be cleared daily.

Haggerty, who lives in Edwardsville, graduated from Kansas University with an education degree in May, and as he is looking for a full-time job, he feels fortunate to spend a few hours each weekday at the Lawrence orchard picking the chestnuts that have fallen onto the ground from the trees.

NovoGradac and Milks then clean and sort the chestnuts and refrigerate them to sell at farmers’ markets and some area grocery stores.

“Our market is a little undeveloped,” NovoGradac said.

Chestnuts aren’t as popular for people in the Midwest, he said, and a majority of the chestnuts sold in America are imported. But NovoGradac and Milks are hoping things change as word spreads about their product, including people being drawn to eating locally grown foods.

“We are raising essentially a potato or corn that falls from trees, and it can be used in any way that those grains can be used,” he said.

He enjoys chestnut recipes such as dumplings, stews and desserts.

He’s hoping for a quality crop of about 1,000 pounds per acre.

Chestnut picking can be hard work, especially on the back, as workers get assigned an entire row, and they must collect all of the nuts that have fallen onto the ground. But those who keep coming back enjoy working in nature and seeing the scales tip in their favor.