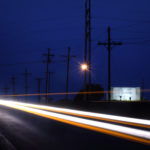 A vehicle's lights create a blur past the power lines and entrance to Westar Energy.

Lawrence homes could be the first in the state outfitted with smart electric meters, thanks to a federal stimulus package geared toward modernizing the country’s power grid.

On Tuesday while visiting a solar energy facility in Arcadia, Fla., President Barack Obama announced that $3.4 billion will be spent on 100 grants that aim to install smart grid technologies.

Among those grants was one to Topeka-based Westar Energy, which has been selected to receive $19 million, United States Department of Energy spokesman Jen Stutsman said.

The money will help finance a $39 million test project known as “SmartStar Lawrence,” which will deploy 48,000 smart meters in Lawrence and the surrounding area.

More than half of the cost for the test project — about $27 million — would be spent on improving computer and software technology in Topeka, which would one day allow the utility to install smart meters for all its customers.

These advanced digital meters would help residents shave as much as 5 to 15 percent off their monthly electric bills.

The federal agency is still working with Westar on details of the award amount and milestones for the project, Stutsman said.

The DOE reviewed almost 400 proposal before selecting the 100 projects. Over the next two months, the money will be distributed and work should be done in the next one to three years.

Westar spokesman Karla Oslen stressed that the utility was still in negotiations with the DOE about specifics concerning use of the money. She said the utility was not yet ready to celebrate.

“We still have to just take a look at it to make sure if it were to be a different amount how much of our money or our investors’ money initially do we want to put forth for this project,” she said.

Westar picked Lawrence to launch its smart grid technology because of its size and wide range of customers, including a transitory student population.

Unlike conventional electric meters, smart meters send information back and forth between the meter and the utility company. Customers with smart meters will be able to monitor their energy usage daily on the Internet. By seeing how energy is being used throughout the month — rather than receiving just one monthly statement — customers can more easily make changes in behavior to lower their bills.

Midwest Energy also received $712,000 for a project in Hays.