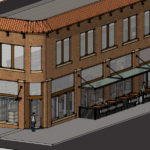 Plans call for a street-level restaurant with outdoor seating along Eighth Street at the former site of Round Corner Pharmacy, 801 Mass. This rendering comes from struct/restruct LLC, the construction/design firm working on the project.

The longtime home of a downtown drugstore is poised to become a contemporary open-air eatery.

Robert Krause, an internationally known chef and owner of Krause Dining, plans to open a counter-service restaurant early next year at 801 Mass.
Interior remodeling work is expected to begin within a couple of weeks, now that Krause and Consolidated Properties LLC, led by Lawrence developer and businessman Doug Compton, closed last week on the purchase of the 144-year-old building at the corner of Eighth and Massachusetts streets.
Krause said he envisioned a February opening for his place that would provide interior seating for about 80 people, plus room for another 20 to 30 on the sidewalk outside.

He sees the bar serving homemade margaritas and other drinks with tequila, rum and pineapple-infused vodka.

“The place will be super casual,” Krause said. “I would say that it’s leaning towards a version of the way I cook — which is not necessarily any one thing, but it has a leaning towards Latin American, Spanish cooking.

“We’re not necessarily talking about a tapas restaurant. We’re talking about a restaurant that will be, one of its main focuses will be Latin American food that is cooked over a great big custom-made, wood-fired grill.”

The restaurant would be Krause’s second foray into downtown dining. Earlier this year, he opened a burger bar at Dempsey’s Pub, 623 Vt., which is another building owned by Consolidated Properties.

Bob Sarna, director of commercial and special projects at First Management Inc., said that Compton, who is president of First Management, was excited about the opportunity to update the Round Corner Pharmacy building while welcoming an optimal use.

“Doug Compton likes to develop these types of properties,” Sarna said of Compton’s partnership that owns more than a dozen properties along Massachusetts and Vermont streets. “It’s a good challenge for a very historic building.”

Krause, who continues to serve high-end meals at his home on Delaware Street, said he thought he would have about 20 employees at the new restaurant.

Among them will be a bar manager whose “first duty, every day, will be to juice three cases of limes,” he said.