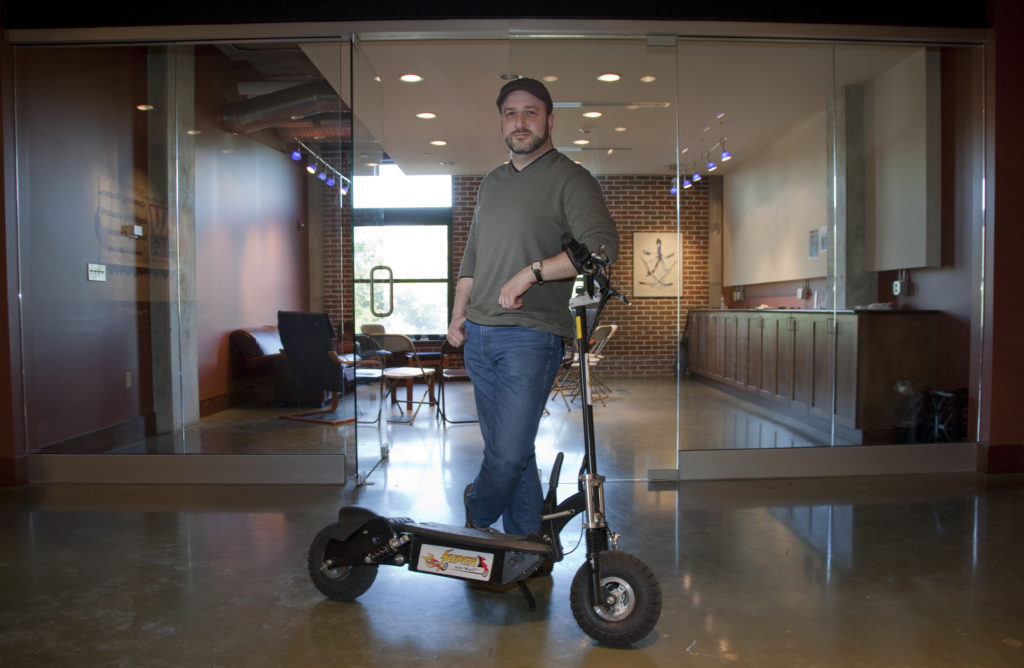 Rabbi Neal Schuster is the new senior Jewish educator to KU Hillel. He keeps an electric scooter at the Hobbs-Taylor Lofts location to commute back and forth to the KU campus. 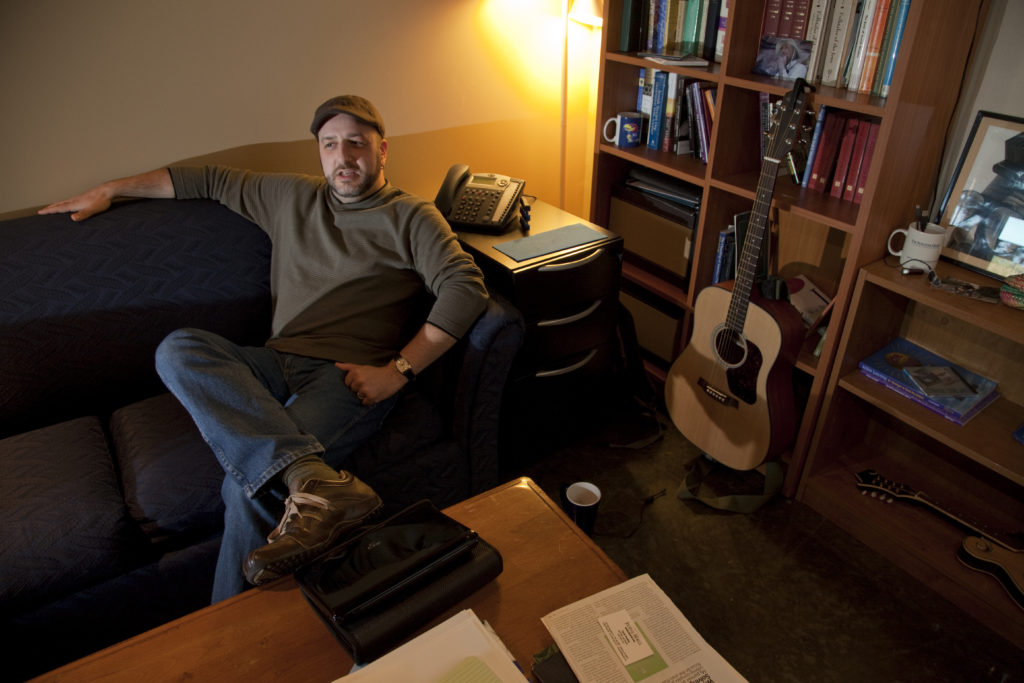 Rabbi Neal Schuster is the new senior Jewish educator to KU Hillel. The laid back leader uses a sofa and coffee table as a desk in his Hobbs Lofts office. 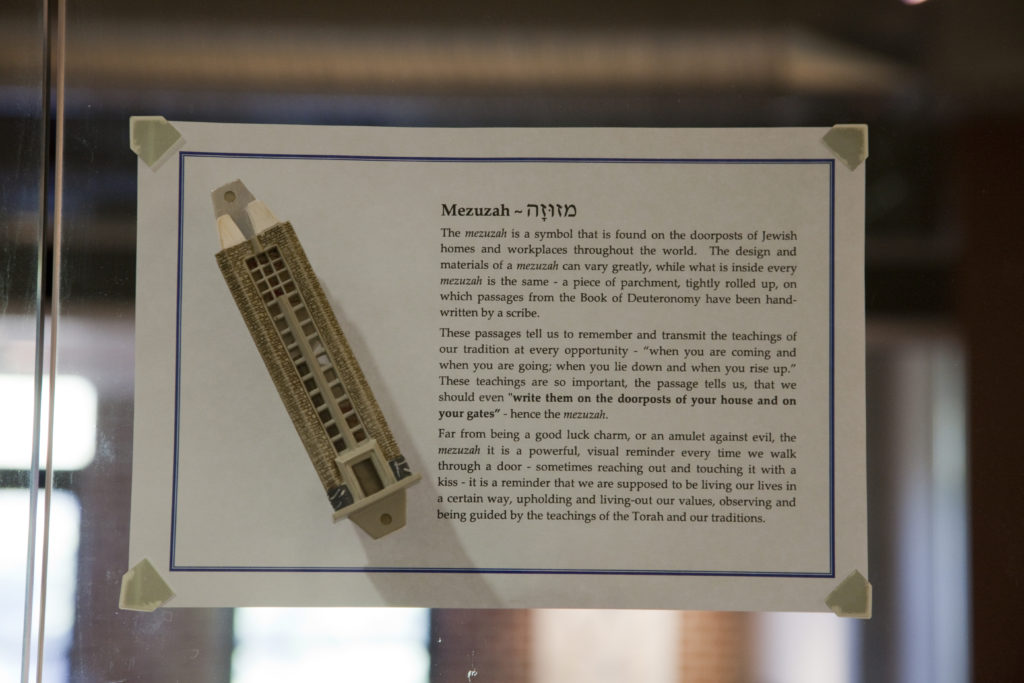 A mezuzah is placed on the front door to KU Hillel, located on the second floor of the Hobbs-Taylor Lofts, 730 N.H. Rabbi Neal Schuster is the new senior Jewish educator for KU Hillel.

The KU Jewish organization moved from its former home — a cute old house at 940 Miss. — into the very modern Hobbs-Taylor Lofts, 730 N.H., in the spring. Then this summer it added Schuster as a senior Jewish educator — one of only 10 at Hillels across the country. The position is made possible through a grant from the national arm of the Hillel organization and gives the chapter not only its first on-staff rabbi, but also a chance to engage more students, says Jay Lewis, the chapter’s executive director.

“It is intended to not be a clergy member in terms of leading services or just doing pastoral counseling necessarily,” Lewis says of the position, which is paid for through the next four years. “The two big goals are to engage more students in Jewish life at KU and to infuse everything we do with more Jewish depth. And he’s the perfect guy for that.”

Indeed, Schuster’s personality seems to be tailor-made for the kinds of deep conversations about life and spirituality that can go hand-in-hand with college life. Sitting in his office in Hillel’s temporary loft space — the group will move into its 3,000-square-foot permanent home on the first floor sometime next month — he sinks into a couch, surrounded by warm light, books and technology, including a laptop and, strangely, a microscope. With its clean lines and comfy feel, the space looks like something of the sort of office a cool teacher would have on a movie set — perfect for conversations ranging from homesickness to how rock ‘n’ roll works into the religious world. Nothing is not a part of Jewish life, he says.

“There is this saying that you see in the Talmud … ‘This, too, is Torah,’ which means this, too, is sacred knowledge. Everything is Torah, whether we’re talking about literally the Torah, or we’re talking about the latest studies in neurology,” Schuster says. “Exploration of the world and how it works and how we work and what it’s all about is a religious activity to me.”

Whether art, music, philosophy, neuroscience or a fly on the wall — everything is part of his particular belief in spirituality. That’s where the microscope comes in — it’s used as a metaphor for the religious duty of exploring creation.

“I often say science and music are branches of theology,” Schuster says. “So, I can connect with a person who’s into music instead of coming to them and saying, ‘OK, King David was … a musician and he wrote all these great songs, so let’s look at the Psalms,’ I can do something like, ‘Let’s look at “The Dark Side of the Moon” … so it’s almost Sukkot, the festival of booths.'”

It’s that kind of creativity about the Jewish faith that make Schuster a unique find for Hillel and the 1,800 or so Jewish students on KU’s campus that Hillel is hoping to connect with, Lewis says. He fully expects students to flock to Hillel’s brand-new space just to sit on Schuster’s couch and talk about Pink Floyd and Sukkot.

“He has a gift for relationships of any-age person, that he’s a phenomenal listener, he gives great insight and feedback, but really of all of his other gifts, when you talk to him, you really feel like he’s 100 percent present and he’s 100 percent there with you,” Lewis says. “Which is great for any age, but for these 18- to 22-year-olds, which are the primary age that we work with, to have somebody of his knowledge base and his life experience to be there for them in that way — it’s just incredible, and that’s why they are responding so well to him.”

Schuster grew up in Seattle, the youngest of five brothers. He studied business administration at the University of Washington and had a real estate company with one brother before graduation. Soon, he quit the real estate game and began taking youths on trips to Israel. Though he has always been heavily involved in spirituality, the last thing he thought he wanted to be was a rabbi.

“I was living the kind of life where people were always saying to me, ‘Hey Neal, when are you going to be a rabbi?’ … and I always had this kind of stock answer. I would always say, ‘I don’t want to be a rabbi because I want to be able to teach the message that you don’t have to be a rabbi to take Judaism seriously.’ And if I’m a rabbi, who’s going to listen to that message?” he says. “But when I asked myself these questions (about life) — ran the numbers, so to speak — every time it came up rabbi. So I said, ‘I’m not going to spite myself. If this is the best job for me, then I’m going to do that.'”

He went to rabbinical school at Hebrew Union College’s Jewish Institute of Religion in Los Angeles. His first full-time rabbinical job out of school? With Overland Park’s Congregation B’nai Jehudah. There, he met Lewis, who is a member of the congregation. They became friends, and when Lewis was mulling over a chance to get the senior Jewish educator grant, he went to Schuster to get a rabbi’s perspective on such a position.

“I went to breakfast with him and I showed him the proposal and I said, ‘Tell me, is this something that rabbis would be interested in? What do you think about this kind of a job?’ — not recruiting him at all, just to pick his brain,” Lewis says. “And he responded with, ‘I think this would be the ideal kind of job for a rabbi to have.'”

KU was one of only two schools to receive the grant that didn’t already have a rabbi on staff. Lewis says adding a clergy member to the staff is important, but the fact that KU Hillel had done so well without one may also be why it was given the grant to begin with.

Schuster is excited about being a part of that impact.

“It’s really a confluence of perfect factors — the right partner in Jay and the rest of the staff here, the right place in terms of KU, where there’s already a connection to this community and the right kind of work,” Schuster says. “This is really exactly what I want to be doing. It’s the kind of work that I became a rabbi to do.”