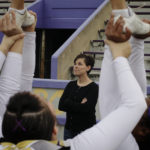 “I’ve always been active and energetic,” says Johnston, who grew up in Holton. “I started dance and gymnastics early, played the tomboy to keep up with my two brothers but maintained my girlie-girl styles with friends, and helped mom around the house.”

She graduated with a nursing degree from Manhattan Area Technical College in April 1999, a Bachelor of Science in exercise science from Kansas State University in May, and married in June.

“I attended K-State by day, performed with the Classy Cats dance team, attended vo-tech at night and worked as a waitress to support myself,” she explains. “Discipline and calendars were a must.”

When her husband accepted a job in Kansas City and she took a nursing position in Topeka, they decided to live in Lawrence.

“We love it here,” she says. “We’ve found so many opportunities for community involvement, and it’s a great place to raise our family.”

In addition to her day job, Johnston coached cheerleading at Free State High School until shortly after the birth of her daughter.

“Three years and two kids later, the parent of a former Free State student asked if I’d consider coming out of retirement to coach at Haskell,” she recalls.

“I chuckled thinking, ‘Wow, my husband’s going to love this, one more thing for me to do,'” she says. “He knew how much I enjoyed coaching, so we decided I should go for it. He’s super supportive, and he and the kids cheer us on at most games.”

Johnston is now in her third year of coaching for Haskell and loves it.

“The student athletes are dedicated and very talented, and I get to turn my personal love of learning into teaching and coaching. It doesn’t feel like a job when you’re having fun,” she says.

She says the challenges of coaching are outnumbered by the rewards that come from helping the athletes achieve their full potential in and out of the classroom.

“Sometimes coaching isn’t always about the physical component,” she says. “It’s mental and emotional, too.”

She admits juggling family and professional schedules is a challenge.

“I’m passionate about everything I do, and that makes a difference,” she says. “I’ve learned to master the balancing act and skill of multi-tasking, so between that and my husband and family’s amazing support, we’ve found we can tackle about anything.”