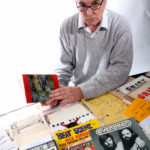 This reading is the Lawrence release for local writer Jim McCrary’s first “real” book, “All That” — a collection of chapbooks dating from 1987 to 2008 published by ManyPenny Press.

“Like all art, most poetry is awful,” says Jim McCrary, referring as much to his own work as anyone else’s. “The poet’s corner in the newspaper. You know what I mean.”

He divulges that reading his own poems often causes feelings of insecurity and embarrassment. His voice, permanently hoarse from a “frozen” vocal cord, can be problematic at readings. Yet McCrary, now 68, has been actively writing, publishing and reading poetry for more than 40 years.

An undiagnosed dyslexic until his 50s, McCrary doesn’t spell too well and seems to abhor the comma. And while his syntax often reads as fevered and foreign, his sharp humor and his strikingly odd juxtapositions evoke images and feelings too meaningful, too incisive to chalk up to chance. McCrary says he just writes it down and scratches at it until it’s done.

Anti-poet? Non-poet? Deconstructionist? McCrary generally dodges attempts at classification by quoting his mentor, poet David Bromige: “I know what I like, and it’s not art.” But in the DIY world of chapbooks — poetry zines, of which McCrary has published several dozen — McCrary is considered an innovator, a masterful technician and an artist indeed.

His first “real” book, “All That,” a collection of chapbooks dating from 1987 to 2008, was published by ManyPenny Press in 2008. Critics, readers and peers have been generous in praise. “Peek inside,” writes poet Richard Lopez on the back cover of McCrary’s book, “and you’ll find poetics with a tough no-bull (expletive) intelligence, yet with a language made of love and tenderness.”

McCrary will read with Lawrence poet Judy Roitman from “All That” at at 6:30 p.m. today at Spencer Museum of Art, 1301 Miss.

Lawrence, too, plays a part in McCrary’s double-edged poems. Soon after his arrival in the early ’60s, McCrary fell in with the free-wheeling literati at the Abingdon Book Shop, forming lasting friendships with the likes of GRIST publisher John Fowler, and writers Charles Plymell and George Kimball, and later with William S. Burroughs, S. Clay Wilson and Allen Ginsberg. Whether alienated by his dyslexia, or swayed by the influence of the company he was keeping, it was then that McCrary staked his claim on poetry’s revolutionary fringe.

Neither effort nor resolve has wavered since. Nor has his predilection for outcasts, outlaws and Wild West parables.

And while the mainstream warms to his voluminous body of work, McCrary, in a characteristic about-face, is currently focused not so much on the printed page as on the computer screen.

“Today, I read a lot of blog poets,” he says. He writes his own sporadic blog, Resisting Poetry, via dial-up connection from a tidy Eastside home shared with artist Sue Ashline, his wife of 17 years.

The Internet, for McCrary, is poetry’s brave new world, as evinced in a fragment of a poem from “All That”:

What was that used to be.

That seems to work.

Assuming that nothing falls into place

And no direction is found

And some sort of definition

Just out of the blue

Then lasting impressions do count

The point is made

some sort of knowledge gained

nothing for sure lost in the dusk

Belle Starr for a moment.

She was ugly as sin

had horrible taste in men

and could not tell north from south.

she knew one hell of a lot

about the Savings and Loan

that’s for damn sure!