A new hue: Pink men’s clothes catching on in Lawrence 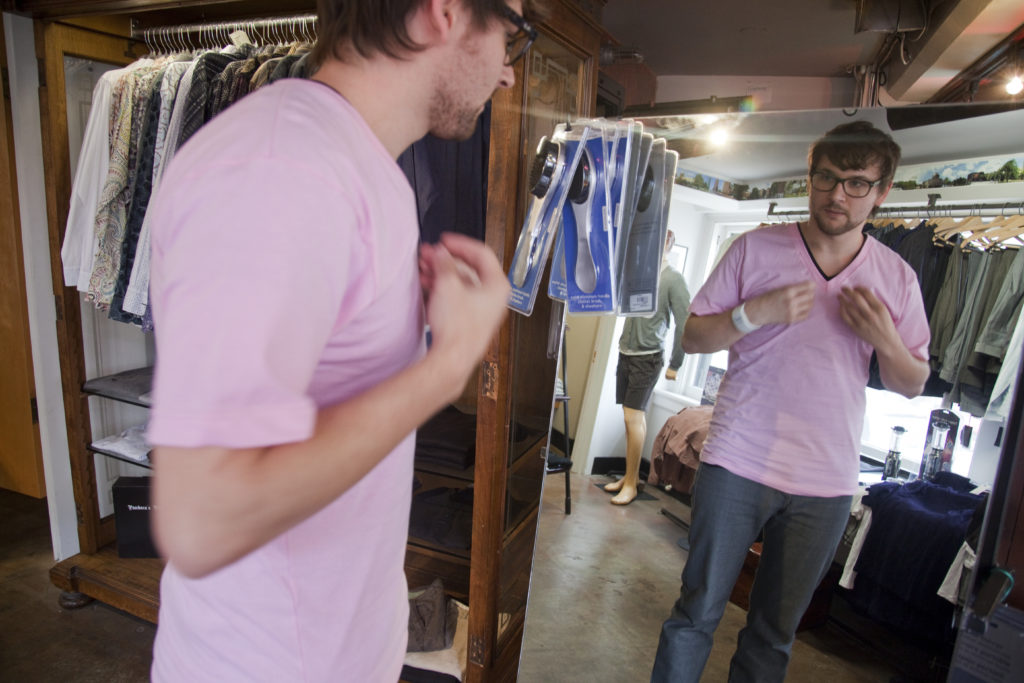 Ryan Estey, an employee at Hobbs, 700 Mass., tries on a pink shirt.

Carson Kressley, the fashion expert who once starred on “Queer Eye for the Straight Guy,” has no problem with guys wearing pink.

He says pink adds a bright pop to a simple jacket or a pair of traditional khakis. He says men can go as bold as they dare with pink, or just add a rosy touch to their outfits.

Pink may be just the thing for a New York-based fashion guru, but what about guys here in Lawrence?

“However, it’s a trend that people have to warm up to — an incoming trend from both coasts, trickling down to the Midwest,” Swanson says. “Here in Lawrence, this trend has been under the curve of the radar for a while.”

“Frat guys at KU tend to wear pink polos — a staple since the beginning of time,” she says. “And even back in the ’80s, men wore Calvin Klein and Brooks Brothers pink shirts. Pink is really coming back. It’s here to stay.”

But he adds: “I try to make the pink less flashy. Color-wise, a lot of middle tones (grays and other neutral colors) work with pink. I also like to wear it with patterns. I might wear a solid pink under shirt, and a patterned tie on top of it, or wear the shirt underneath a jacket. It’s all about trying to accentuate the pink rather than solely showing pink.”

His idea of the perfect outfit? “A slim-cut gray pinstripe suit and a pink button-up shirt with a skinny, gray, square-bottom knit tie,” he says.

Harrison Soelter, 20, a Johnson County Community College student who lives in Lawrence, notes that “the fashion trend of men wearing pink is definitely showing up in Lawrence, and a lot of guys are wearing it. But I actually hate the color pink, and don’t own anything in that color.”

Soelter admits that there are definitely guys who can pull that look off.

“I think that jocks or really popular guys tend to wear pink,” he says.

Lawrence freelance writer and book critic Adam Murphy, 25, reads a lot of fashion blogs. He says he doesn’t mind the trend but wouldn’t wear pink himself.

“A lot of the guys wearing bright, bold pink are fraternity brothers,” he says. “I see them wearing crisp pink Oxford button-up shirts.”

Murphy is more a fan of “subtle pink” or “salmon-colored” shades.

“J.Crew has a white with vertical salmon stripes button-up shirt,” he says. “Soft colors are kind of making a comeback in men’s fashion, but usually it’s a very faint pink or salmon, or even red.”