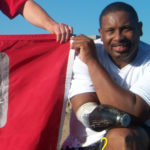 Anthony Smith, who was wounded while serving in Iraq, will participate in the Ironman 70.3 Kansas with help from Operation Rebound.

• Established by the Challenged Athletes Foundation in 2004 to assist U.S. service members and first responders who have sustained physical injuries in the line of duty.
• Provides support in athletic events and endeavors, including triathlons, surfing, martial arts and weightlifting, among others.
• Seeks to provide a support system for injured veterans during their recovery.
• Worked with 80 athletes in 2008 and has assisted 45 so far in 2009.

The Ironman 70.3 Kansas is an event in the Ironman triathlon series. It is known as a half-Ironman because athletes will swim 1.2 miles at Clinton Lake, bike 56 miles in Douglas County, and run 13.1 miles on the course, totaling 70.3 miles. A full Ironman competition has a 2.4-mile swim, 112 miles on the bike and a 26.2-mile run.

For athletes who compete in extreme endurance events like the upcoming Ironman 70.3 Kansas, injuries are just another part of the challenge. Strained hamstrings, shin splints and sore backs are just a few of the common ailments these endurance athletes frequently encounter.

But Iraq War veteran Anthony Smith, a former high school All-America football and basketball player who will compete in the June 14 Ironman at Clinton State Park, has a more serious and lengthy injury list.

“I usually have to start from the top of my head and go down,” said Smith of the many extra challenges his body faces.

A direct hit from a rocket-propelled grenade while on duty with the National Guard in Iraq in April 2004 took part of Smith’s right arm, a kidney, some of his large intestine, a third of one of his femurs, one of his hips and some of the vision in his right eye.

Following the attack, Smith’s body was initially placed in a body bag until a nurse noticed air bubbles oozing through the blood and realized he was still alive. It took two months for Smith to wake up from the coma.

Smith is one of a few athletes from Operation Rebound, a national organization that assists wounded veterans in athletic competitions, who are coming to Lawrence to compete in the Ironman.

Operation Rebound has helped Smith with his athletic goals, but he also credits the organization with providing a spark during the tough recovery moments when he was ready to give up on sports — and even life. Following his recovery from the attack, Smith was confined to a wheelchair and his weight ballooned to more than 300 pounds.

“(I was just) sitting home retired and waiting for everything else to come to an end,” Smith said.

Nico Marcolongo, program coordinator for Operation Rebound, met Smith in 2008 during a swimming competition. The Smith he sees today is a very different person from the one he first met. Marcolongo said that when he met Smith, he was wheelchair-bound and a cigarette smoker.

“He’s been flourishing ever since. … It’s night and day,” Marcolongo said.

Smith’s fiancée, Tamiko Coleman, also has seen the dramatic transformation in a man who wasn’t supposed to be doing the things he does.

“They told him he wasn’t going to walk again,” said Coleman, adding that their two children gain inspiration from a father who spends hours every day in the gym preparing for events.

In his fifth triathlon, Smith will compete in the swimming and biking events, but will opt out of the running portion.

“I can walk pretty good and pretty fast. … I just can’t run because I don’t have a hip,” Smith said.

Not that the swimming and biking portions are an easy task, either. Due to his injuries, Smith bikes with only one leg and swims with one arm and one leg.

But for Smith, the setbacks he faces while training and competing are mostly a “mental challenge.” Smith said he relies on his Christian faith when facing adversity and he has created an unlikely acronym he uses for inspiration: Life S.U.C.K.S. The “S” stands for “walking in the Spirit,” “U” for “never giving Up,” “C” for “Counting my blessings,” “K” for “Keeping the faith,” and “S” for “Standing tall.”

Smith writes the acronym on his mirrors at home and recites it to counter those moments when “life sucks.”

In addition to the contributions that training for triathlons has made to Smith’s own recovery, he said he hopes his competing will give inspiration to others.

“My purpose is to make other disabled people know that life isn’t over because you have injuries,” he said.

• Born in Columbus, Miss., and now lives in Blytheville, Ark.
• Father of four who plans to marry his fiancée, Tamiko Coleman, sometime next year.
• Began four years of active duty service in the U.S. Army in 1990, and later became the chief of police for the Joiner Police Department in Joiner, Ark.
• Transferred to the Arkansas National Guard after his time with the Army. His unit was deployed to Iraq in 2003.
• Injured by a rocket-propelled grenade in Iraq in April 2004, and spent 62 days in a coma.
• Completed a 600-mile bike ride from San Francisco to San Diego in 2008.
• Has participated in four previous triathlons.