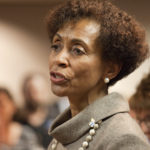 Bernadette Gray-Little is introduced as Kansas University's 17th chancellor on Friday, May 29, at the Kansas Board of Regents office in Topeka. Gray-Little is provost and executive vice chancellor at the University of North Carolina at Chapel Hill. She is a former psychology professor who served as dean of UNC's College of Arts and Sciences before being named provost.

Legislators, campus leaders, research advocates and health administrators are looking forward to meeting with Bernadette Gray-Little once she takes over as Kansas University chancellor.

After all, there’s plenty of work to do — including a check of the University of North Carolina provost’s loyalty.

“I want to make sure she’s on the right side of the basketball rivalry,” said state Sen. Derek Schmidt, senate majority leader and KU grad.

Legislative issues — from ongoing budget cuts to discussions about public-financing levels to building strength for spinning off KU research into commercial applications — will be among matters sitting on Gray-Little’s desk at Strong Hall, the one being vacated by Robert Hemenway as of June 30.

Schmidt is confident that Gray-Little’s strong record as a professor, researcher and administrator at North Carolina would serve her well in Lawrence.

“North Carolina and Kansas are two of the greatest state universities in the world, and two of the finest public research institutions in the world,” said Schmidt, who will be taking classes beginning this fall at KU’s law school. “Bringing in a new chancellor who understands that niche, in the great scheme of higher education, is a real positive.”

LaVerne Epp, president of the Lawrence-Douglas County Biosciences Authority, said that when he heard that Gray-Little was coming from Chapel Hill, N.C., his first thought was a welcome one: Research Triangle.

That’s the technology power center formed in Raleigh, Durham, Chapel Hill and points within that section of North Carolina, forming a cluster for bioscience breakthroughs and resulting commercial applications.

Epp is among officials in northeast Kansas who are working to build upon KU’s strength in drug-delivery research to boost economic development efforts. KU’s School of Pharmacy is putting up a new building on West Campus, and an incubator is in the works for accommodating efforts considered promising for transfer into the business world.

“Having her perspective will be great,” Epp said.

Both Schmidt and Epp mentioned the importance of KU succeeding in its efforts to secure cancer center designation from the National Cancer Institute.

“Having been part of the leadership at a university that already has a National Cancer Institute-designated Cancer Center, I am confident Dr. Gray-Little will be a tremendous asset as we continue our quest for NCI designation here in the heartland,” Atkinson said.

Lisa Wolf-Wendel, president of KU’s Faculty Senate, spent much of Friday afternoon reviewing Gray-Little’s background, looking for hints, references — anything — that might indicate what trouble the university could be in for.

Instead, she learned that the incoming chancellor had risen steadily through the ranks at North Carolina, having participated in various roles involving university governance. Gray-Little also has worked to boost faculty salaries, expand UNC’s honors program, boost study-abroad opportunities and raise money for other needs.

All, it seems, while respecting the role of faculty as more than mere employees in a corporation.

At least two KU students are excited about the appointment.

Mason Heilman, who will serve as student body president this fall, said he knew KU would be in for good things when he received a text message — at 3 p.m. sharp — from friend Adam McGonigle, his presidential predecessor and member of the chancellor’s search committee.

“He’s in Israel right now, and I asked him how he could be sending a message,” Heilman said. “He said, ‘I really can’t afford it, but I’m too excited not to do it.’ He said he and the other committee members were very enthusiastic about her.”

Heilman, who lives in Lawrence and graduated from Free State High School, is looking to working with the new chancellor on matters of interest to students: Allowing students to recover the full cost of tuition for classes dropped within the first week of a semester, and perhaps even dropping men’s basketball games played during Winter Break from student ticket packages.

A former KU dean of fine arts, James Moeser, recently stepped down as chancellor of UNC and resumes responsibilities there this fall as a professor. Now Gray-Little — promoted by Moeser to UNC dean of arts and sciences, then to provost — is making her way to Lawrence.

“It seems like a very symbiotic relationship,” Heilman said. “I think KU and North Carolina are two of the best public universities that you could find, so it’s not terribly surprising that she comes from there.

“I’m looking forward to working with her.”