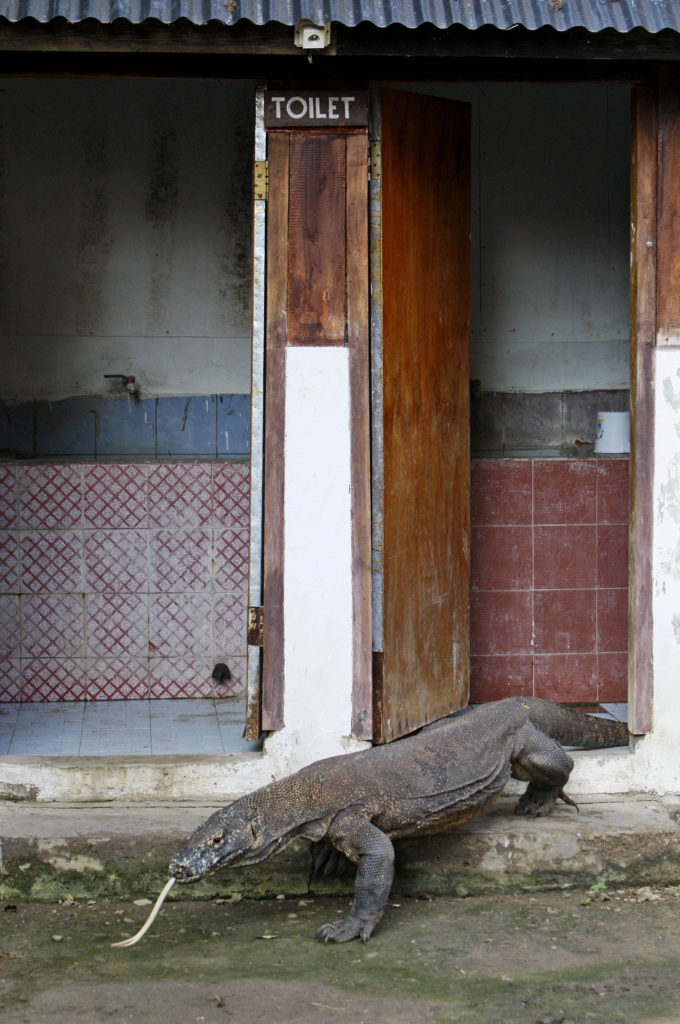 A Komodo dragon moves out of a toilet April 28 at a visitor center on Rinca island, Indonesia. Attacks on humans by Komodo dragons — said to number around 2,500 in the wild — are rare, but seem to have increased in recent years. Komodo dragons have a fearsome reputation worldwide because their shark-like teeth and poisonous saliva can kill a person within days of a bite.

Komodo Island, Indonesia ? Komodo dragons have shark-like teeth and poisonous venom that can kill a person within hours of a bite. Yet villagers who have lived for generations alongside the world’s largest lizard were not afraid — until the dragons started to attack.

The stories spread quickly across this smattering of tropical islands in southeastern Indonesia, the only place the endangered reptiles can still be found in the wild: Two people were killed since 2007 — a young boy and a fisherman — and others were badly wounded after being charged unprovoked.

Komodo dragon attacks are still rare, experts note. But fear is swirling through the fishing villages, along with questions on how best to live with the dragons in the future.

Main, a 46-year-old park ranger, was doing paper work when a dragon slithered up the stairs of his wooden hut in Komodo National Park and went for his ankles dangling beneath the desk. When the ranger tried to pry open the beast’s powerful jaws, it locked its teeth into his hand.

“I thought I wouldn’t survive… I’ve spent half my life working with Komodos and have never seen anything like it,” said Main, pointing to his jagged gashes, sewn up with 55 stitches and still swollen three months later. “Luckily, my friends heard my screams and got me to hospital in time.”

Komodos, which are popular zoo exhibits from the United States to Europe, grow to be 10 feet long and 150 pounds. All of the estimated 2,500 left in the wild can be found within the 700-square-mile Komodo National Park, mostly on its two largest islands, Komodo and Rinca. The lizards on neighboring Padar were wiped out in the 1980s when hunters killed their main prey, deer.

Though poaching is illegal, the sheer size of the park — and a shortage of rangers — makes it almost impossible to patrol, said Heru Rudiharto, a biologist and reptile expert. Villagers say the dragons are hungry and more aggressive toward humans because their food is being poached, though park officials are quick to disagree.

The giant lizards have always been dangerous, said Rudiharto. However tame they may appear, lounging beneath trees and gazing at the sea from white-sand beaches, they are fast, strong and deadly.

The animals are believed to have descended from a larger lizard on Indonesia’s main island Java or Australia around 30,000 years ago. They can reach speeds of up to 18 miles per hour, their legs winding around their low, square shoulders like egg beaters.

When they catch their prey, they carry out a frenzied biting spree that releases venom, according to a new study this month in the journal Proceedings of the National Academy of Sciences. The authors, who used surgically excised glands from a terminally ill dragon at the Singapore Zoo, dismissed the theory that prey die from blood poisoning caused by toxic bacteria in the lizard’s mouth.

“The long, jaded teeth are the primary weapons. They deliver these deep, deep wounds,” said Bryan Fry of the University of Melbourne. “But the venom keeps it bleeding and further lowers the blood pressure, thus bringing the animal closer to unconsciousness.”

Four people have been killed in the last 35 years (2009, 2007, 2000 and 1974) and at least eight injured in just over a decade. But park officials say these numbers aren’t overly alarming given the steady stream of tourists and the 4,000 people who live in their midst.

“Any time there’s an attack, it gets a lot of attention,” Rudiharto said. “But that’s just because this lizard is exotic, archaic, and can’t be found anywhere but here.”