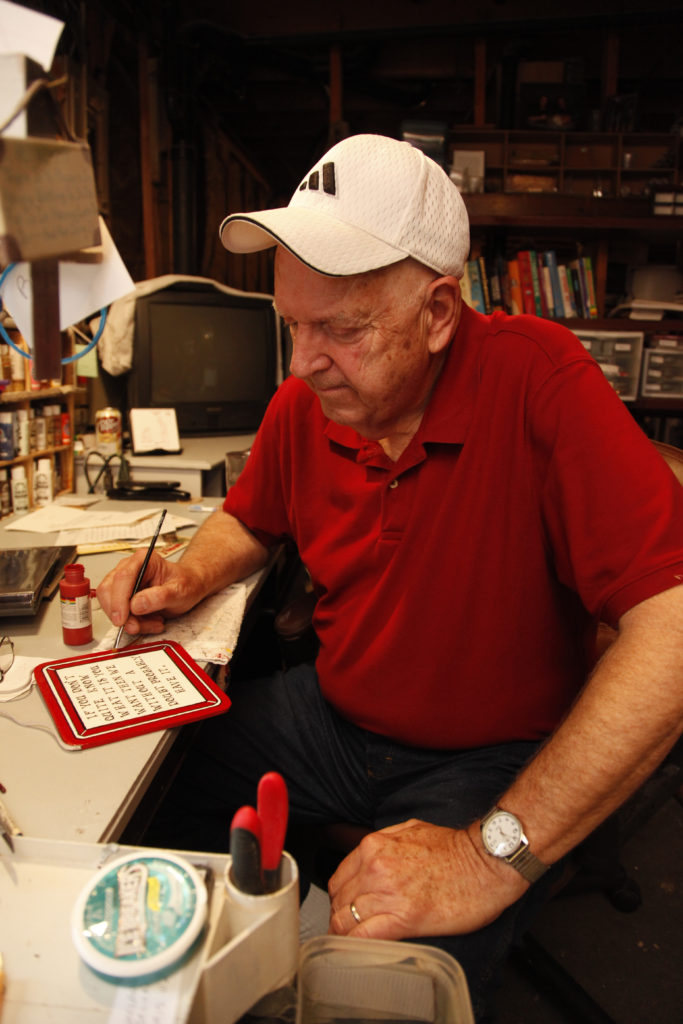 Having worked for the city of Lawrence for many years before retiring, Larry Colley still has the passion to make signs that he gives away. He never accepts money for his signs.

After seven years and 1,000 signs, a Lawrence artisan still is distributing his handiwork throughout the community.

When Larry Colley, 70, retired from the Lawrence Parks and Recreation Department, he knew he needed a hobby.

“I just thought this would be a neat thing to keep me busy, and my goodness, it has,” Colley said.

Colley handcrafts and paints wooden signs. He typically finds the phrases he uses in joke books but sometimes comes up with them himself. One sign displayed prominently near his desk reads, “I’ve tried relaxing, but I really think I’m just much more comfortable tense.”

Colley could be considered a year-round Santa Claus for Lawrence. His workshop could rival that at the North Pole with the hundreds of handmade crafts, tools, paints and pens.

“When I give these signs away I don’t ever charge anybody. I just like to give them to (people), and they enjoy getting them,” Colley said.

He hands them out to business owners, families, graduates, 50th anniversary couples — anyone in Lawrence is likely to receive his work. He finds many future sign recipients in the Journal-World.

Colley never accepts money for the signs — not even trades for produce at the Farmers’ Market. However, the Lawrence Humane Society has been turning the signs into donations.

She said the signs go for at least $10 apiece, and they have raised a few hundred dollars for the shelter so far.

Other businesses just enjoy their decorative quality. “He made us a cute little sign with a grandpa and a grandma on it. It was really funny,” said Emina Mustic, manager of Britches Clothing Co., 843 Mass.

Colley has at least 100 signs in his workshop ready for delivery.

“I don’t know how to explain why I give them for free, but it’s just rewarding to see their smiles,” he said.