Dragon Wagon: High schooler creates one monster of a vehicle 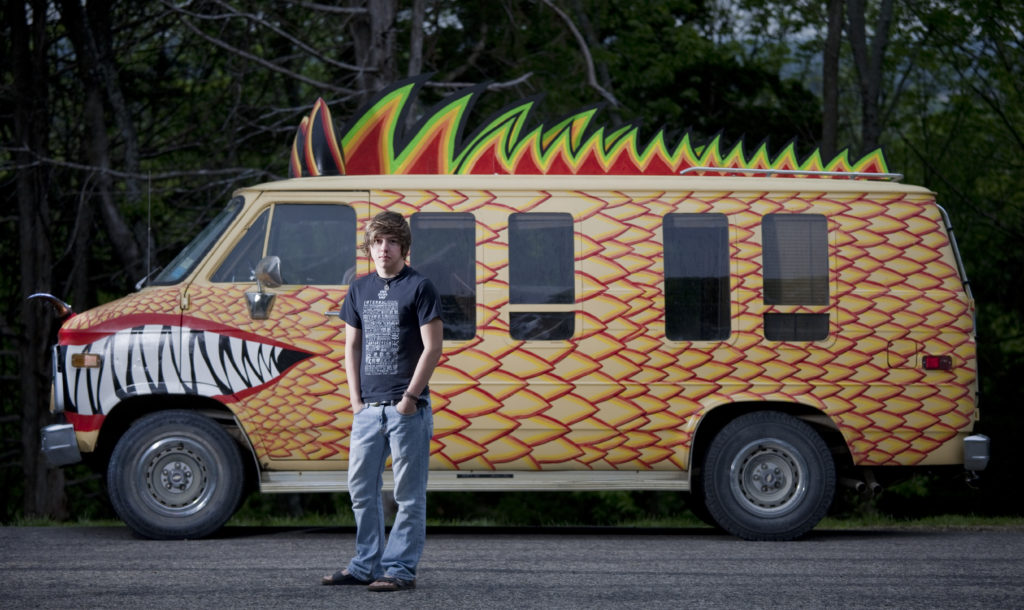 The Batmobile or Herbie the Love Bug could pull into the parking lot of Martin Nelick’s school, and it’s doubtful they would attract more attention than his own ride.

The Baldwin High School senior has lately been driving his souped-up Chevy G20 to class prior to its official unveiling at this weekend’s Art Tougeau parade.

“The kids love it. They’ll be climbing all over it,” Nelick says. “The administration hates it. I took it to school once during an alumni-come-home banquet, and the administration got ticked off about it being there when all the old people were around. Either way, it gets a lot of strong reactions.” 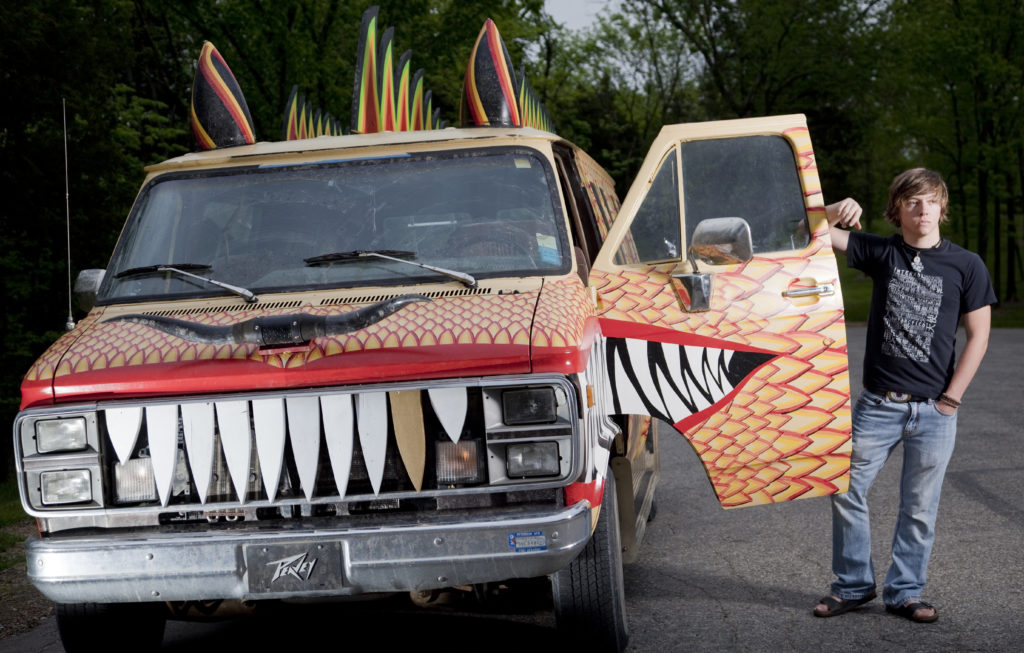 Nelick remodeled the old family van that had been sitting idle in his driveway for years. The horns of the Dragon Wagon are actually Vietnam-era rocket fairings that Nelick bought off eBay.

“Baldwin does this thing called the senior project, and you’re supposed to help out the community or build something. I was already doing some volunteer work at a hospital, so I figured I’d do something for fun,” the 18-year-old says.

So Nelick set his sights on the old family van that had sat dormant for years in the driveway of his rural property on the south edge of Lawrence. Unfortunately, the 1989 Chevy had been gathering more than just dust.

As part of his senior project, Nelick was required to select a mentor. He turned to family friend Pat Slimmer of Slimmer’s Automotive Service, 2030 E. 23rd St.

“Just the other day I started it up, and there was a rat (in the engine), and it got torn apart.”

Slimmer and Nelick decided the van would be a perfect candidate to be transformed into a piece worthy of the Art Tougeau parade, an annual downtown Lawrence tradition that features wheeled art creations from local and national artists.

“The curse of art cars is you take the worst vehicle in the world that’s about to die and you make an art car out of that. But once you’ve done that, you can’t let it die anymore,” says Slimmer, who is president of the parade board.

As soon as the vehicle actually became drivable, Nelick went to work on its eye-popping design.

“I sat down with some friends, and we came up with everything from a rocket ship to a rainbow to one that was a black-and-white optical illusion,” Nelick says.

“We figured (a dragon) would be the easiest thing to do because a lot of it was just paint.”

Covered with red and yellow scales, the Dragon Wagon also features Stegosaurus-style fins made of plywood material and teeth that look like they were once part of a picket fence. The most unusual addition is a set of horns, which are actually Vietnam-era rocket fairings that Nelick bought off eBay.

While he considers the art van a real creative success, Nelick wasn’t able to modify it entirely the way he wanted. Plans were scrapped for installing a smoke system that would shoot flames out the van’s mouth.

“You definitely notice it coming down the road,” says Slimmer, who is no stranger to odd vehicles. His past Art Tougeau projects have included a UFO car and a Cadillac covered in chalkboard paint so kids can draw on it.

Slimmer says Nelick truly rose to the occasion with this enterprise.

“Martin is a good kid. He’s really focused. He stuck with it and got it done,” Slimmer says.

The student will get to show off his beast as part of the pre-parade festivities, which includes assembling the cars for elementary school children. Sadly, that will be one of the few Art Tougeau events Nelick will be able to partake in.

“I’m going to have to have somebody else drive it on Saturday in the parade because I’ll be at graduation,” he says.

So what will happen to the Dragon Wagon after the parade has ended?