Lori Carson - Special to the Journal-World 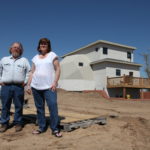 Jill and Scott Eller in front of their split-geodesic dome home in Greensburg, Kansas. Thursday 23 April 2009

Greensburg ? Stubby remnants of once majestic oaks, maples and cottonwoods dot the prairie landscape, silent witnesses to the devastation of the deadly F5 tornado that killed 11 people and all but destroyed this Kansas town two years ago Monday.

But now, the trees don’t stand alone on barren land. A new crop of earth-friendly structures has sprouted up around town, and residents — including Jill and Scott Eller — are returning.

“I had friends die in the tornado. We lost our house, everything. I didn’t want to be reminded of that every time I turned a corner,” Jill Eller said in explaining her initial resistance to returning to her home of 15 years.

The Ellers, including Jessica, one of their two daughters, and Bunny, their beagle, rode out the storm crammed together in a main floor closet, helplessly listening as the shrieking ferocity snatched away their roof and violently ripped their home’s walls from the foundation. Their destroyed home had no basement.

Their other daughter, Jordan, was away on a school trip the night of the disaster and returned the next day.

It was their daughters’ insistence on returning to school in Greensburg that convinced the Ellers to reconsider. Today, a piece of the destroyed high school’s gym floor, cut and engraved as a souvenir, is displayed in the family’s new home.

“I came to realize that coming back and rebuilding was part of the healing process, something positive to focus on,” Jill said.

Bob and Ann Dixson were among the first to rebuild and on the same lot where the monster twister, packing winds in excess of 200 mph, chewed apart their 100-year-old, three-story Victorian home as they huddled under an area rug in the basement.

“It was never a question for us. We felt people needed to see people coming back,” said Ann Dixson of the couple’s decision to stay and rebuild. She is a magistrate judge, and her husband is the town’s new mayor. The tragedy prompted their daughter, Stacey Barnes, to move back home to Greensburg from Lawrence.

“We’ve come a long way in two years. 2007 was about the tornado. Last year was about cleanup. This year it’s all about construction, rebuilding,” said Barnes, director of the town’s new arts center.

Today, the Dixsons live in a systems-built rancher on Grove Street. The house comes in pre-built components that are assembled on-site. The fireplace is made of reclaimed stone from the ruins of their original, and a steel-reinforced safe room spans a long wall in the basement. They have a lawn and landscaping considered lush by Greensburg standards and designed to conserve water.

In March, the Ellers moved into a house across the street from the Dixsons in what many would consider the most eye-catching and energy-efficient home in Greensburg: a split geodesic dome made from SipSmart-manufactured panels and designed by Lawrence builder Michael Morley. The panels consist of a foam core laminated to rigid facings to form a shell that provides not only thermal insulation but also the strength and storm-resistance important to the Ellers.This home has a basement.

The Ellers credit the home’s efficient design and their on-demand hot water system with cutting previous monthly gas bills of $120 down to $30, and they confess that the idea of saving the planet took a back seat to savings in their wallet.

“It was the cost savings that got our attention first, more than anything about going green,” says Scott Eller, who considers himself an energy-conscious convert and is quick to discuss their dual flush/low water use toilets and bamboo flooring.

Mayor Dixson has his own definition of what it means to be green.

“Our ancestors taught us that if you take care of the land, it takes care of you. They taught us to be good stewards of the resources that the good Lord has blessed us with. And if we’re good stewards, then we’re going green.”

The community’s initiative to “put the green back in Greensburg” by becoming a national model of sustainability is credited by some as being the town’s saving grace.

“Most small towns that suffer this extent of natural disaster become ghost towns,” said Daniel Wallach, executive director of Greensburg GreenTown, the nonprofit organization spearheading the green rebuilding efforts. “What we’re attempting to do here is the equivalent of a global barn-raising.”

While that may be an ambitious goal for a community robbed of 95 percent of its infrastructure, significant progress is already visible.

The striking 5.4.7 Arts Center, designed and built by a class in the Kansas University School of Architecture, boasts geothermal heating and cooling, wind turbines and a reclaimed rainwater system.

Kiowa County Courthouse, which partially survived the tornado, incorporates an underground cistern, spray foam insulation and is being rebuilt as one of the greenest historical buildings in the country.

The town is the first in the nation with all LED street lights, and a community wind farm, slated to be operational by November, is projected to provide enough power to meet all the town’s energy needs.

If progress proceeds as planned, Greensburg is slated to become an eco-tourism destination, designed to promote a lifestyle and boost the local economy. The eye-grabbing, state-of-the-art, energy-efficient Silo-Eco Home, scheduled for completion this summer, will also serve as a museum where visitors can spend the night.

Jill Eller credits the eco-centered plans with attracting much-needed volunteers, donations, money and publicity the community would not have had otherwise.

“You wouldn’t see what you see here today without this green movement,” she said. “It saved our town.”

In the two years since the tornado, estimates show that 900 of the previous 1,400 residents have returned. Almost 200 new homes have been built or are under construction. Last year the schools registered 29 new students. About 40 percent of the town’s infrastructure has been restored.

“Crisis does amazing things to human relations,” Wallach said of Greensburg GreenTown. “It shifts strengths and builds the social fabric of a community.”

Other indications aren’t supported by numbers.

Last week, a few blocks over from Grove Street, the foundation was being dug for the new home of the Dixsons’ daughter Stacey. And the Ellers’ youngest daughter will be a member of the first graduating class of the new high school.

There is no shade in Greensburg.

But battered branches are boasting the hopeful signs of spring green.