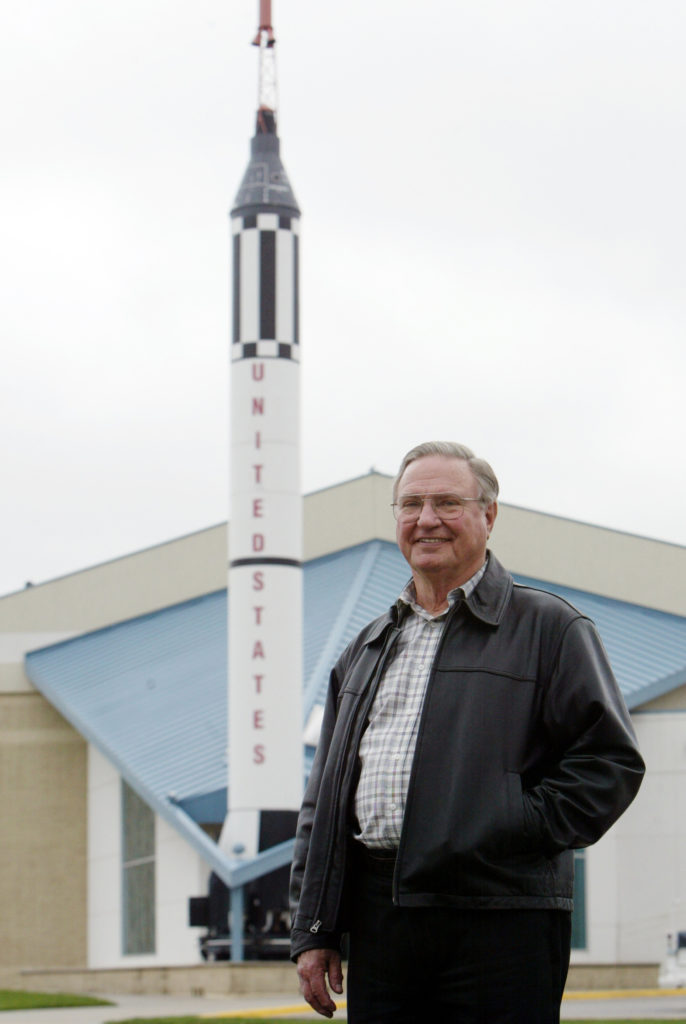 Wayne Koons credits his becoming a pioneer in the U.S. space program to timing.

Lyons ? Wayne Koons credits his becoming a pioneer in the U.S. space program to timing.

A young Marine just out of flight school, he was learning to be a helicopter co-pilot in early 1959 and “minding my own business” when summoned by his commander to be team leader of a three-helicopter crew assigned to pickup missions for the initial U.S. manned space flights.

Forty-eight years ago on May 5, Koons was the pilot who retrieved astronaut Alan Shepard, the first man launched into space, and his Mercury capsule. That mission remains the only time a helicopter picked up both the man and the capsule together.

Koons, 74, a 1956 graduate of Ottawa University, has earned the university’s 2009 Outstanding Achievement Award for “his outstanding career, life accomplishments and strong sense of ethics.”

Koons, a rural Lyons native who closed out a 22-year career with NASA as division manager for the $250 million Orbiter project and served 31 years as an active and reserve Marine, recently recalled details of that first meeting with his commanding officer nearly a half century ago.

“He outlined the idea that the United States was going to put a man in space,” Koons said. “The spacecraft hadn’t even been built yet, but there were two things they were concerned about.”

Those things were: That once the craft landed in the ocean it might sink, and how a man might react to being in outer space.

“They wanted to get the astronaut and the spacecraft out of the water quickly,” Koons said.

For two years, the helicopter team struggled with the payload capability of the aircraft balanced against the weight of the spacecraft and bag that would fill with water and keep it afloat. They downsized the helicopter crew from the normal three to two and stripped out seats, a life raft, heater and more — everything they could, Koons remembered.

Before the Shepard mission, their three flights retrieved two unmanned missions, including one 92 miles out with the celebrated chimpanzee Ham aboard.

Koons remembers the assignment as being mentally intense.

“Mostly, I had my head down and was working hard,” he said.

After five years as an active-duty Marine, Koons retired to join Space Task Group, the precursor to NASA, as the 87th employee in the program.

He spent a decade in flight operations, a front-row seat to history, from the first manned outer space flight to the first landing on the moon.

Koons was in mission control at Cape Canaveral and an initial debriefer for the flight of the Liberty Bell, with the late Virgil “Gus” Grissom aboard, that experienced the premature popping off of a newly designed explosive hatch that allowed the capsule to fill with water and sink to the ocean floor.

Recently Koons revisited the Liberty Bell at the Kansas Cosmosphere and Space Center and recalled the flight.

“Months of engineering study and analysis failed to determine what happened,” he said.

After working with Apollo and Skylab, he was selected as a member of the initial space shuttle program.

“I think it’s important that we keep aggressively moving in all areas of technology,” he said. “If that’s the approach that integrates well with others then that’s what we should be doing.”

He expects the space program will return to the moon and sees flight to Mars as “a worthwhile objective.”

It will demand serious development of spacecraft and extensive training, analysis and commitment, he said.