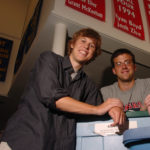 The duo of Brett Bricker, a Wichita senior, and Nate Johnson, a Manhattan senior, defeated Wake Forest on a 4-1 decision in the final round of the tournament, which was held in Austin, Texas.

Wake Forest won the tournament in 2008.

It was the first-ever tournament win for 18-year veteran coach Scott Harris. He led the KU debate team to third-place finishes in 1994 and 1999.

KU advanced from the “Final Four” of the tournament into the championship round on Monday night, according to Ron Johnson, Nate’s father. The KU team defeated California-Berkeley on a 3-2 decision. In the other semifinal, Wake Forest University upset Northwestern University, Johnson said.

Check back to LJWorld.com for more on this story as it becomes available.