Kansas death penalty survives but will be studied for possible repeal 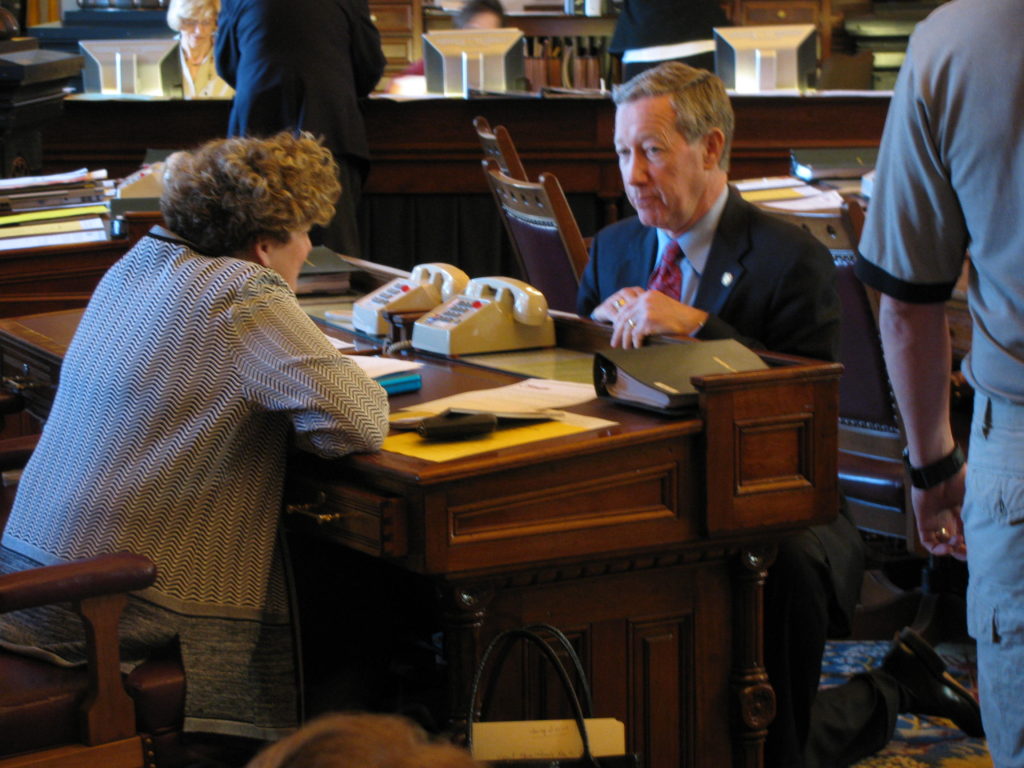 Kansas Senators John Vratil and Vickie Schmidt confer before Senate deliberations on a bill to repeal the death penalty.

The Kansas death penalty will live on, but continue to be studied for possible repeal.

That was the result after three hours of debate Monday in the state Senate.

On a nonrecorded voice vote, the chamber sent Senate Bill 208, which would have abolished the death penalty, back to the Judiciary Committee, which intends to give it to the Kansas Judicial Council for study over the summer.

Passions rose as lawmakers voiced their opinion about capital punishment, but any steam the bill had began to disappear as Senate Majority Leader Derek Schmidt, R-Independence, found what he said were probably unintended problems with the legislation.

Schmidt described the measure as “seriously flawed” and “not ready for prime time.”

The bill would have abolished the state death penalty for cases after July 1.

But Schmidt said those who had been previously sentenced to death could have their punishments overturned because their appeals will run after July 1. He also said the 48-page bill failed to continue the state’s life-without-parole sentence, although supporters of the bill said it was still in there.

The legislation also would have allowed the governor to commute life-without-parole sentences, according to some opponents.

At first, Schmidt moved to essentially kill the bill, but its supporters made a deal to have the measure sent back to committee for further study.

“We had the discussion that was much needed,” state Sen. Carolyn McGinn, R-Sedgwick, one of the sponsors of the bill, said after the debate.

But for the current 2009 legislative session, the issue is dead. Sen. Tim Owens, R-Overland Park, and chairman of the Judiciary Committee, said there was no way his committee could reconsider the measure in the final weeks of the session.

Some senators opposed sending it back to committee, saying they wanted to kill the repeal measure so that it wouldn’t come back next year.

There are some crimes that are so heinous, “I would volunteer to be the executioner,” said Sen. Ty Masterson, R-Andover.

Sen. Susan Wagle, R-Wichita, said repealing the death penalty would lead to the devaluing of life. “We’re going to say it’s OK to take the life of an innocent human being,” Wagle said.

But supporters of the repeal argued the death penalty hasn’t worked as a punishment, and is much more costly because of the additional legal procedures needed to litigate a capital murder case. Since the death penalty was reinstated in 1994, 11 men have been sentenced, but there have been no executions as appeals and challenges to the law continue.

Those legal costs take away from programs that help stem violence, McGinn said.

Sen. David Haley, D-Kansas City, called the death penalty barbaric and Neanderthal, and asked, “How much sense does it make to murder people who murder people?”

Sen. Marci Francisco, D-Lawrence, said the death penalty was not a deterrent, and she feared that some receive the sentence because of inadequate defense counsel.