Branching out: Tree-themed art exhibits sprout up across town 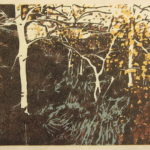 “Nurture,” a woodcut by Chancey Jahnig that will be included in the exhibit “Trees I Have Known” at the Lawrence Percolator art gallery.

The walls will hold artwork dedicated to and featuring trees, so he’ll let the grain show through.

“It’s not going to be covered by any paint,” Reeves says.

Trees are taking center stage at local art galleries starting this month as three separate exhibits of arboreal art open. They are:

• “Trees and Other Ramifications” at the Spencer Museum of Art, 1301 Miss., which opened Thursday.

• “Trees I Have Known,” which opens Saturday at the Percolator, which is in the alley behind the Lawrence Arts Center, 940 N.H.

“It’s pretty universal,” Reeves says of the tree theme. “It’s a universal subject that everyone can relate to on some level.”

The tree exhibits started with “Trees and Other Ramifications” at the Spencer. The show straddles the worlds of art and science, with some pieces drawn from KU’s Natural History Museum.

“To ramify is to branch out,” says Stephen Goddard, senior curator of prints. “Of course, there is a double meaning here since today we mostly think of ramifications in terms of consequences, and I was thinking this is a nice way to suggest both what trees are, and what our responsibility is to help preserve them and the full richness of biodiversity.”

Works in the exhibit include a diagram of the evolutionary tree from Charles Darwin’s “On the Origin of Species,” 15th- and 16th-century books with elegant family trees, a 100-year-old fossil leaf from Ellsworth County and “Structure of Thought No. 15,” an ink print by Mike and Doug Starn.

“I’d like (viewers) to have had a few fresh glimpses of the importance of trees to the natural world and to the world of human thought,” Goddard says. “While not a stated goal of the exhibition, I would certainly be gratified if visitors found the exhibition to be a sort of catalyst for their ecological awareness.”

The focus is less ecological and more about relationships with trees at the Percolator’s show, Reeves says.

“I don’t think there’s a strong eco-message,” says Reeves, who is curating the show. “Maybe you can read that into some of them. But I think it’s more about admiration than a warning (about the environment).”

“Trees I Have Known” is the largest-scale show yet at the Percolator. Reeves says he had more than 300 entries from 150 artists from across the country.

The resulting show includes photographs and 2-D art. But it also includes more unusual works, including a rubbing of a large tree trunk.

One of the works is a painting by 9-year-old artist Eleanor Matheis of Lawrence, a fourth-grader at Cordley School.

“I drew it on campus, on the top of the hill,” she says. “Trees are very interesting, because sometimes they’re planted and they can curve, and sometimes they’re straight. They have different shapes of leaves. And guess what? I saw this tree with white leaves on campus.”

Another is a multimedia collage by Lawrence resident Jake Vail. It includes a photograph of a gigantic Douglas fir tree he once climbed in Oregon, along with climbing gloves and a string used to measure the fir’s 36-foot circumference.

“Just the subject of (the show) immediately grabbed me,” Vail says. “I was an arborist for a half-dozen years or so when I lived in Oregon, so this was a good opportunity.”

Meanwhile, Sally Piller of 6 Gallery says she’s always loved the way trees are depicted in art and jumped at the opportunity to have a companion exhibit to the Spencer’s “Trees and Other Ramifications.”

“Trees have their own personalities. People almost do portraits of them,” Piller says. “They have a lot of anthropomorphic characteristics, and a lot of symbolic characteristics. They’re used in so many ways graphically, from family trees and the tree of life.”

The pieces in the 6 Gallery exhibition include woodcuts, drawings and paintings.

Piller compares the multi-artist shows to a dinner party, with the organizer wondering how the pieces will interact. In that case, she’s looking forward to three tree parties.

“This will be like going around and seeing all these little dinner parties going on,” she says.