Slain student’s mission shines on in volunteer service to community 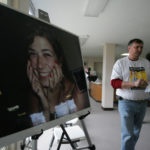 Curt Brungardt, father of slain Kansas University student Jana Mackey, passes by a portrait of his daughter in the United Way building on Sunday during the first observance of Jana Mackey Day. Volunteers completed a number of tasks related to Eleven Hundred Torches, a domestic violence prevention project established by Mackey’s parents in her memory.

After 25-year-old Kansas University law student Jana Mackey was found slain in her ex-boyfriend’s home last July, her parents wanted to make sure her legacy of volunteering and advocacy lived on.

They received some help from the Kansas Legislature and Gov. Kathleen Sebelius, who declared March 8 Jana Mackey Day in the state. It is no coincidence that it falls on the same day as International Women’s Day.

“It’s a way to encourage people to serve others in their community,” said Curt Brungardt, Jana’s father. “We know we can’t bring Jana back, but we know that we can encourage others to carry her work forward and so that’s what we’re doing.”

“Jana was a very active participant in the community and so we’ve asked people to remember her by volunteering,” said Sarah Terwelp, executive director for WTCS. “She would be very excited and happy to see the numbers of folks that are out here actively doing the work that she has always done and participated in.”

Lawrence resident Marci Neilsen worked with Mackey at the state Capitol. When she found out the state had dedicated a day to her co-worker’s memory, she knew she wanted to volunteer.

“I saw her in the Capitol early in the morning, late at night,” Neilsen said. “She cared deeply about women’s issues. I commend her, her parents and her friends who have decided to honor her memory by motivating us to work on her behalf and work in the spirit of the community.”

Brungardt and his wife, Christi, started Eleven Hundred Torches, a service movement, and know that their daughter helped make the world a better place.

“She’d be surprised they would do this for her, I’m convinced of that,” he said. “Jana fought long and hard for women’s rights, but she was also an advocate for community.”

Sen. Marci Fransisco, D-Lawrence, was one of the legislators to sponsor the resolution honoring Mackey.

Today, the Brungardts will be presented with a certificate by some members of the Kansas House, including Reps. Barbara Ballard, D-Lawrence, and Paul Davis, D-Lawrence.