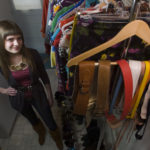 Katy Seibel is a finalist in a style contest sponsored by Lucky magazine. She has come up with some creative use of space for her mud room — as a makeshift closet.

It sounds like the plot of some frou-frou Kate Hudson romantic comedy: A young woman from Kansas becomes a finalist in a magazine contest and is whisked away on her first trip to New York City, where she competes against two big-city gals for a chance to win her dream job for a day.

Add a cute love interest, some Milk Duds and a big dose of girl power, and this story sounds like a ready-made multiplex confection.

But rather than the latest script out of Hollywood, this is real life for Katy Seibel.

Seibel, a Lawrence native through and through, became a girl in the middle of her wildest dreams in December when she was picked by Lucky magazine as a finalist in the publication’s Style Spotter contest with Lucky Brand Jeans. A few weeks later, she flew to New York for a day of makeup, hair and fashion, modeling for the cameras for a professional magazine advertisement. Then, after a few glorious days in the city, she was sent back to her regular life as a copy writer by day and a fashion blogger by night to await her fate in a national competition.

The last chapter of Seibel’s story starts at 9 a.m. Monday when voting begins in the competition that will determine whether she gets her happy ending. If online visitors to LuckyStyleSpotter.com/LuckyBrand vote her look the top one, Seibel will win the opportunity to play stylist for a day at a real, live photo shoot. And one voter will get a happy ending as well: a $1,000 Lucky Brand Jeans shopping spree.

Voting runs until the night of April 6, but Seibel won’t be holed up losing sleep for the next month. Instead, she opens her eyes wide, smiles and without a hint of the saccharine golly-gee attitude so often seen in such Hollywood fluff, analyzes her recent good fortune.

Seibel’s journey began in December when she found out about a contest Lucky magazine was sponsoring in collaboration with Lucky Brand Jeans. The competition? Create a look that dresses up your jeans for a night out. The prize? Not only the whirlwind trip to New York to model for a day, but the chance, if picked by online voters, to be a stylist on a photo shoot.

Seibel thought it sounded like a neat idea and entered — not that she ever thought she’d win.

“I already had a picture from my blog that fit the theme,” says Seibel, who maintains the fashion blog Kansas Couture in her spare time. “And I was like, ‘Hmm, couldn’t hurt.’ I already had the picture, took no time at all and I just kind of entered on a whim. Definitely not expecting anything from it. Just kind of random. I never enter contests, I’ve never won a contest, it was just so random.”

Every couple of days, Seibel would go to Lucky’s Web site to see how her look — jeans with a sweet blue sleeveless top from a post about holiday party clothing — was rating with viewers. She did better than she expected — hovering in the top 10 — but she surely didn’t think she’d be getting a call from contest execs until a strange number flashed on her cell phone while she was at work at Payless ShoeSource in Topeka. Somewhere in the back of her brain a voice told her that the strange number wasn’t from a run-of-the-mill robocall, but something more. Sure enough, a woman from the contest left a message. Seibel’s style, which she admits changes almost daily, had struck a chord with online voters and officials from both Lucky magazine and Lucky Brand Jeans.

“We were impressed at her unique style and the fact she’s willing to take risks,” says Michelle Cardone, associate publisher of creative services for Lucky magazine. “Also, Katy proves that you don’t have to live in a big city or spend a ton of money to have a great style.”

Indeed, Seibel’s blog features many vintage and affordable pieces, not $1,000 handbags or dresses by designers with penthouse addresses.

In a matter of weeks, Seibel was going to fill more than one dream in the span of 48 hours: Her first trip to New York City, the chance to dress up as a model and style herself for a feature that was to appear in a national magazine.

And so, a day after her 23rd birthday, Seibel and her boyfriend, Travis Cline of Lawrence, boarded a plane to the big city. Though they landed in the middle of a frigid cold front, Seibel’s inner fashionista couldn’t help but be inspired by the bundled up New Yorkers as they passed her on the sidewalk.

That inspiration continued with her fellow finalists: a uber-successful fashion blogger from New York and a fashion designer from Los Angeles.

“I did, at one point, kind of think to myself, ‘Why am I here?’ The girl from New York has a really successful fashion blog that I read before this even happened, she’s really popular, has a lot of followers — I think she’s going to win, that’s my guess. And then the girl from L.A. is a fashion designer, like has her own line of clothing,” Seibel says. “So, I was like, ‘OK … uh. A fashion blogger from New York, a fashion designer from L.A. and I’m just some random girl from Kansas.’ But I felt lucky to be there.”

But she is indeed a finalist and she’s got her shot at beating both of the big-shot fashion folks and getting her happy ending all thanks to clothing — something she admits she already revered.

“I feel like a lot of people don’t take advantage of the opportunity the clothes we wear present — you can really make a statement with what you wear,” she says. “Clothes have a lot of power, actually.”