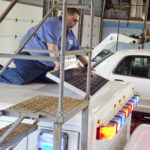 Terry Eaton installs a new solar panel on a Lawrence city ambulance. The solar panel will allow the ambulance's electronic systems to receive power without the engine running, reducing fuel consumption and emissions.

After analyzing costs, city officials decided solar panels would reduce expenses. Stark said emergency vehicles use a lot of energy because they must idle at the scene of incidents.

Two ambulances and two fire trucks will get the panels. The first kit was installed on an ambulance Wednesday morning. The city purchased an 80-watt solar panel for each vehicle for $500 each.

Steve Stewart, the city’s fleet manager, said he hopes the panels pay for themselves in 24 months.

“Right now if we have a vehicle that’s, say, out on inspection, if you leave the turn signals on or the radios going, it will run the battery down pretty quickly.” Stewart said. “That puts a lot of extra load on the alternator to recharge the batteries and, consequently, uses more fuel.”

Other communities have tried putting solar panels on emergency vehicles — with inconclusive results.

“We decided we would go ahead and start our own database,” Stewart said. “We could determine quicker whether or not this was going to be something we wanted to expand and do on more vehicles.”