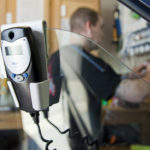 Matt Weidenbach, Lawrence, runs a computer test on a breathalyzer after doing an ignition interlock installation on a vehicle at Ace Bail Bonds Inc. on Thursday. A bill that was introduced in the Kansas House in the last session would make it mandatory for those convicted of a DUI to use an ignition interlock system.

A Douglas County prosecutor will be taking a look at the state’s laws related to driving under the influence.

Assistant Douglas County District Attorney Gregory Benefiel recently was named as one of the 23 members of the Kansas DUI Commission.

The group will study a proposed revision of all Kansas DUI laws, which could include increasing penalties for repeat offenders and creating a new offense of aggravated DUI.

The group will be required to submit a preliminary report by opening of the 2010 session of the Legislature in January, and a final report by the start of the 2011 session.

It’s closing time at a Lawrence bar, and one patron who’s had a few too many desperately searches for someone who is sober enough to breathe into his ignition interlock device in order to get his car started.

He eventually gives up and walks home.

“That right there could’ve saved one life,” said Steve Robson, Ace Ignition Interlock co-owner. “That one guy was drunk enough that he couldn’t get his car started, couldn’t figure out how to get it started, so he had to walk home.”

The number of installations of ignition interlock devices is increasing in Kansas as the Kansas Legislature keeps tightening the state’s DUI laws.

According to Marcy Ralston, chief of the Kansas Driver Control Bureau, there are currently 2,873 drivers, mainly repeat DUI offenders, who are required by law to have ignition interlock devices installed in their cars. That’s up 45 percent from the year before.

But if Mothers Against Drunk Driving had its way, that number would be much higher.

MADD is pushing for legislation in all 50 states that would require ignition interlock devices for all convicted drunken drivers, including first-time offenders.

MADD started the campaign in 2006. This week, Hawaii became the 11th state to make ignition interlocks mandatory with any DUI conviction.

Harris said since New Mexico enacted its interlock laws in 2002, the rate of drunken drivers re-offending in that state has decreased 65 percent.

There are only three states that don’t require the devices at all: Alabama, South Dakota and Vermont.

Kansas law requires anyone convicted of two or more DUIs to first have his or her license suspended for one year. Then, in order to begin driving again, an ignition interlock must be installed on the person’s vehicle for a minimum of one year. In some instances, first-time offenders must also use the device: if the offender’s blood-alcohol content was above .15, if the offender is under age 21, or if the offender refuses to submit to a breathalyzer test.

But a bill introduced in the Kansas House in February would have made it mandatory for anyone convicted of a DUI to use an ignition interlock and would increase the amount of time repeat offenders are required to use the device. Under the proposed legislation, anyone convicted of five or more DUIs would be required to use an ignition interlock for life.

“The problem with that first year, you’re under suspension and people aren’t able to get to work,” Robson said. “So they’re talking about shortening up your suspension period and letting you have this equipment for a longer period of time; that way you can still drive to work, still make a living.”

Robson’s company, Ace Ignition Interlock, travels around the state installing anywhere from 10 to 15 ignition interlocks every week. Robson said the proposed legislation could cause that number to triple.

“I think it would be a big boost,” Robson said. “I think a lot of people will chance that first DUI. Most people, I hope after that first one, they get a clue, and they wake up and don’t chance that second one.”

The device is simple. It’s installed into the ignition wiring under a vehicle’s dashboard. The driver is required to blow into a plastic tube in a handset, about the size of a remote control. If the unit detects any alcohol above the .025 level — not the legal limit of .08 — the car will not start.

The unit also requires rolling retests at random intervals, prohibiting a drunken driver from having someone sober blow into the device to start the car, then getting in and driving off.

Robson said he receives few complaints, other than the costs. The equipment costs $75 to install and then the driver must pay $67 a month after that. The unit also has to be recalibrated every 60 days or the vehicle will shut down.

Most advocates of the ignition interlocks say it’s a small price to pay to possibly save a life.

“I’ve got a man who is 90 years old on this equipment, all the way down to 18-year-old kids,” Robson said. “It’s pretty protective as far as keeping drunk drivers off the road. I think it helps.”