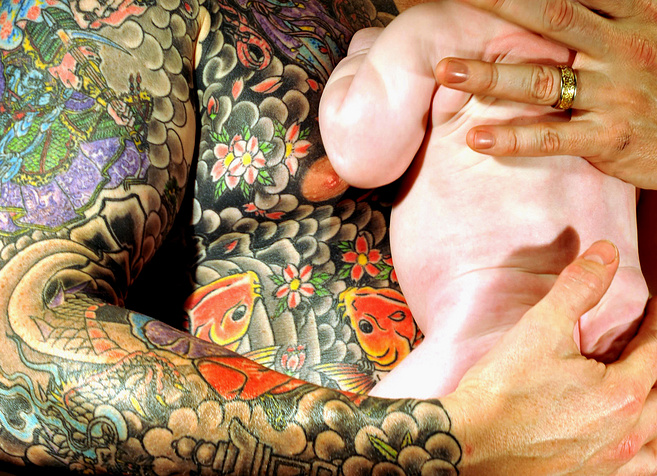 A photo by Lee Tonks shows the artist holding his infant son. 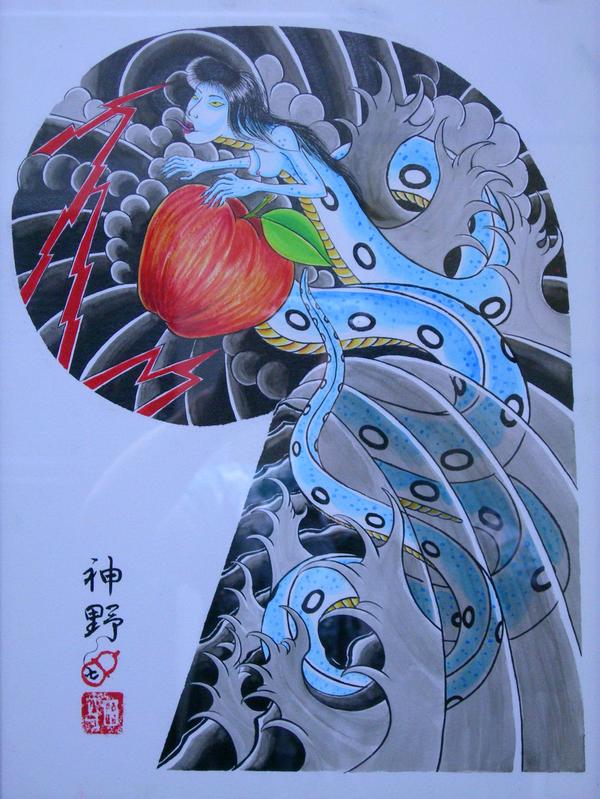 “Lady Kiyohime,” a water color and ink on paper by Martin Del Camino. 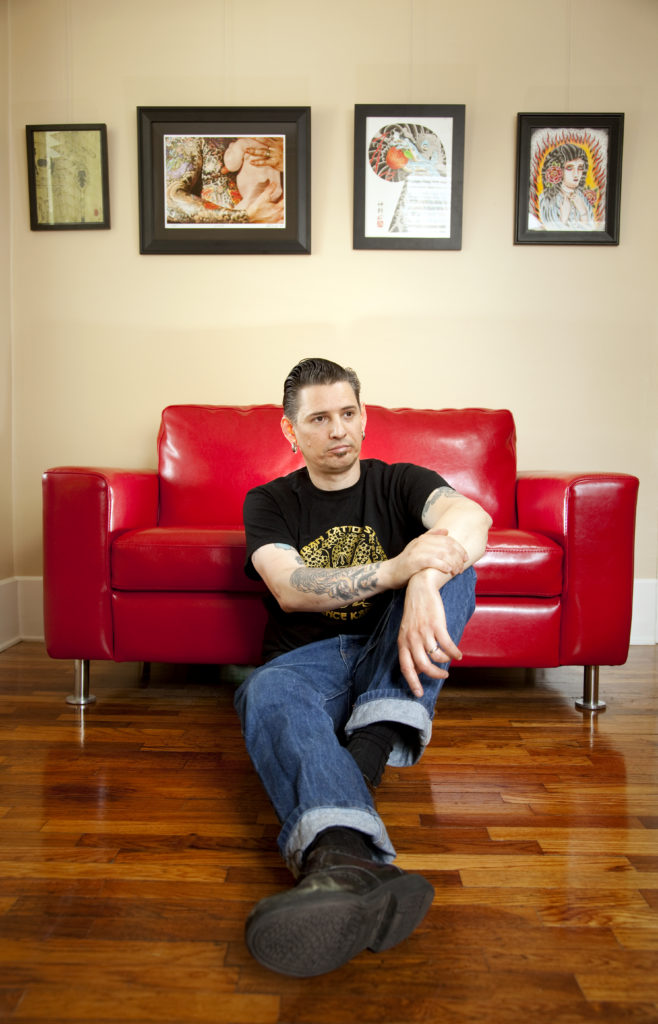 Lawrence tattoo artist Martin Del Camino is pictured inside Ichiban Tattoo Studio. The venue is hosting its first art show, which will feature the work of a number of tattoo artists.

But he is hardly limited to reproducing the images of fire-breathing dragons or circles of barbed wire found on the average frat guy. Instead, his work represents a multicultural collage.

“When I was a kid, my idea was to be an artist. But growing up I learned you have to eat, too. You try to figure out what you can do where you can eat AND paint,” says Del Camino, owner of Ichiban Tattoo Studio, 1912 Mass.

Despite being a native of Argentina, Del Camino’s specialty is Japanese-style body art. His tattoos often employ the colorful fish, flowers, waves, swords and armor prevalent in such Eastern styles — as does the artwork he renders on paper or canvas.

Del Camino will be joining colleagues from around the nation in displaying such pieces during an “Untitled Art Show” he is hosting at Ichiban. The work will showcase the paintings, drawings and photography of tattoo specialists.

In addition to Del Camino and his apprentice Ben Weas, artists displaying their work include:

Of particular note is Tonks, who has gained international fame as a photographer.

“In most of my photos I like to juxtapose matters which are not usually seen on the same stage, for example, my 8-year-old daughter with a 12-gauge shotgun and a teddy bear dripping in blood, or a hangin’ corpse with two pregnant women,” Tonks says.

Del Camino has been tattooing since 1992 and living in Lawrence since 2006. He opened Ichiban last year — the name translates to “number one” in Japanese.

“I could have used an Argentinean word, but people wouldn’t know what that is,” he says.

He netted experience dealing with the art crowd in 2004 when he began working at Los Angeles’ Victory Studios, an appointment-only tattoo shop with an art gallery in front. The venue threw shows four times a year, displaying the work of artists such as Robert and Suzanne Williams, Von Franco, C.C. Deville and Makoto.

Del Camino studied graphic design at college in Argentina, where he learned watercolor and acrylic. But once he started getting heavier into tattooing, his work became more influenced by Japanese specialists.

“Kids today use markers to do their linings. I learned how to use Japanese brushes,” he says.

Of the artwork featured at the Ichiban show, Del Camino says, “Most of the stuff is based on the kinds of styles the guys like to do when they design a tattoo.”

Currently, there are more than 20,000 tattoo parlors in the U.S.

“It used to be, people would come and say, ‘I want this little tattoo.’ Now they want their whole arm done.”

Does this mean tattoo artists are earning the same type of respect as painters or sculptors?

“As tattoos are becoming more mainstream, people are inadvertently learning to appreciate tattoos as an art form,” Tonks says.

“There are so many ‘hack’ tattooists out there, but when you come across a tattoo artist who really knows his craft, you soon realize that you’re in the presence of an artist.”