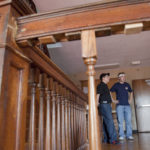 From left, Rob Garcia, Shawnee, KU junior Zach Williams, Olathe, and Bill Joeckel, Osawatamie, gather on a second floor landing at the KU Sigma Nu house Saturday evening during a tour of the fraternity house led by Williams. Williams was recounting stories of mysterious events in the house prior to a team of Elite Paranormal and K.C. Paranormal Studies members doing a ghost investigation Saturday night.

It contradicted all the movement inside.

For eight hours a team of paranormal investigators scoured the house in search of clues to the building’s rumored haunting.

The team, consisting of members of K.C. Paranormal and Elite Paranormal of Kansas City, searched every room and every floor hoping to find clues to support the rumors that suggest the house is haunted by Virginia, a mistress of former Gov. Walter Stubbs, who lived in the house before the fraternity moved in. Virginia, according to the undocumented story, hanged herself in 1911.

Bill Joeckel, who led the investigation Saturday night, said he had wanted to search the house for the past five years. The Osawatomie man said something had always thwarted his efforts to look through the supposed haunted house.

The group of paranormal investigators worked methodically, moving from room to room in response to the different energies in the building. Joeckel said the team had been slowly developing a routine it would use in each subsequent investigation. The team worked mostly in silence throughout the night.

James Presnell, the quantum physicist in the group, carried boxes full of equipment into Room 201, which sat empty on the second floor of the fraternity house. Within minutes he had unloaded the various pieces of equipment — most of which he built himself — from the boxes.

Presnell set up sensors to measure everything from electric voltage in the room to the magnetic fields of the Earth. Each device displayed a reading he hoped would yield clues that would help him understand what was happening in the house.

Presnell, founder of K.C. Paranormal, said the key to the investigations was the connection between science and spirituality and making the two work together.

“I’m not looking for proof,” Presnell said. “I don’t need proof. I grew up with this stuff.”

Presnell said he focused instead on the changes in the environment in areas that were supposedly haunted. Shifts in temperature or voltage readings and changes in magnetic fields help him make logical connections to what might be occurring in a spiritual realm.

Other members of the group sifted through the various rooms of the house, responding to clues given by the team’s psychics, who were said to be in contact with the spiritual energy in the house.

During Saturday night’s investigation, Presnell said he noticed some of the changes he was looking for. Team members will take the next few days to process their experiences in the house and put the pieces together.

“We have to thrive on the clues,” Presnell said. “When people say something doesn’t exist, that’s being subjective.”