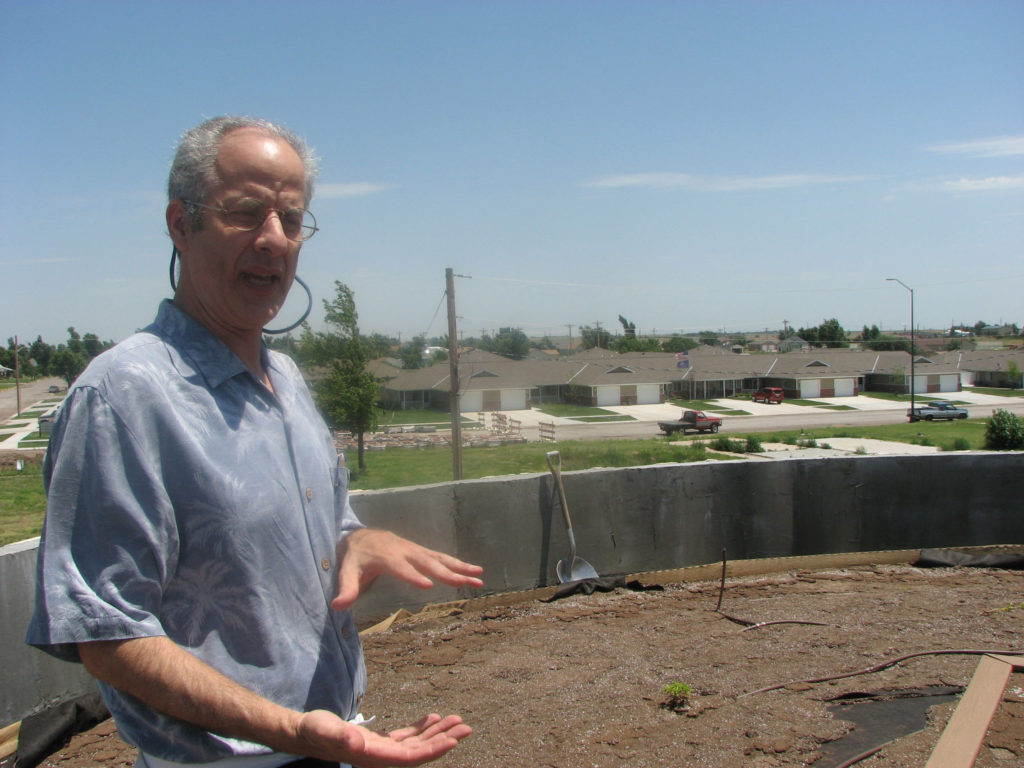 Daniel Wallach, executive director of Greensburg GreenTown, talks about the group’s “green tour” from atop the group’s first eco-home in this July 14 photo. The home is made of environmentally friendly and recycled products and includes an earth roof. The home will be used both as office space and lodging for visitors.

But it’s another tourist attraction, not those claims to fame, that is bringing folks across the globe to Greensburg.

Take a drive in a tour bus through the streets of Greensburg, which was nearly wiped off the map by a tornado two years ago. Yes, you’ll see lingering effects of devastation, but, more importantly, something else — a town being rebuilt as a model green community.

Look inside the town’s new eco-home, which features ideas like energy-efficient heating and air conditioning, water-efficient toilets and a garden on the roof. Tour the art center, eat at one of the local restaurants or shop at the business incubator — all places using environmentally friendly technology.

“So many people are interested in what is going on here,” said Greensburg resident Susan Reinecke.

She and her husband, Scott, who ran an auto body shop in town before the tornado, opened Studio 54 — a glass art studio and gallery — a few months ago in the business incubator on Main Street. For several months, they didn’t know if they wanted to stay or open a business in a town ravaged by a tornado. Now, folks from New York, England and Australia are setting foot in the store.

Across the nation, people have tuned in to Planet Green’s television documentary, she said. They want to see the town for themselves.

Some locals featured on the show even have a fan base coming into town, said Ruth Ann Wedel, office coordinator as well as tour planner for Greensburg GreenTown, a nonprofit organization working with the city on the green initiative.

The idea started through the nonprofit, said Daniel Wallach, executive director of Greensburg GreenTown. The goal is to provide educational tours of the town’s rebuilding effort — such as new residential, commercial and civic buildings.

The group has been giving informal tours since early June and has already given 33 tours for 191 people, he said. He hopes those partaking in a tour will take back some of the ideas to their own communities.

“This is a showcase of how to build sustainable and live greener,” he said on a recent trip across town to a few of the tour sites.

For instance, he said, many homes and structures in Greensburg are being built with insulated concrete foam, a better insulation that cuts down on the energy bill. Visitors can see the John Deere farm implement dealership, which last week received the highest-rated certification for Leadership in Energy and Environmental Design, Wallach said.

Moreover, as soon as the first eco-home is completed, visitors can spend the night in a green structure.

He said the eco-homes use recycled and native products that don’t damage the environment. For instance, the eco-home’s deck is made of recycled material, he said.

Taylor Schmidt, 18, said he was going to a forensics meet when he learned his town, and his home, had been destroyed.

One of the residents featured on the Planet Green documentary, as well as a student intern for Greensburg GreenTown, Schmidt now gives tours of what is becoming a greener Greensburg.

“What makes Greensburg special is something you can’t define,” he said, “but I have the opportunity to share this special place with different people from all over.”