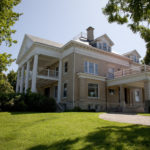 Starting Saturday night at a Kansas University fraternity house, Bill Joeckel will attempt to solve a mystery that has haunted his curiosity for five years.

The Osawatomie man knows the legend behind Virginia — a ghost rumored to haunt the Sigma Nu house — has been the focus of speculation and chilling accounts from fraternity brothers for decades.

Joeckel and a team of paranormal investigators will work throughout the night searching for clues in the house at 1501 Sigma Nu Place, which is northwest of the KU campus.

“We try to figure out: How can we explain it on a scientific basis?” said the information technology recruiter, who searches for ghosts and paranormal activity as a hobby.

According to a legend that has never been documented, the house has long been rumored to be home to Virginia, the mistress and a servant of Gov. Walter Stubbs, who lived in the house. Stubbs was governor from 1909 to 1913.

According to the story, when Mrs. Stubbs found out about the affair, she became jealous, and the mistress hanged herself at the house in 1911. Virginia is rumored to haunt the fraternity.

Fraternity brothers have passed down stories throughout the years, and chapter members invited Joeckel’s group — which includes members of Kansas City Paranormal Studies and Elite Paranormal of Kansas City — in to investigate.

“I’m just more curious than anything. I’d like to see if there is anything actually going on,” said Piper sophomore James Asherman, the Sigma Nu chapter’s historian.

The investigators have searched various buildings in the Kansas City and northeast Kansas area. Joeckel said the team includes a psychic and a quantum physicist.

They use scientific equipment to take measurements and readings in the house. Team members will take physiological readings of the psychic as she moves through the house to see if her heart rate jumps, for instance, when she claims to be interacting with something spiritual or supernatural.

In about 90 percent of the cases, the team is able to find a logical explanation on why someone was spooked. Air leaking through a vent, for example, could cause a creepy noise in a house, Joeckel said. But a few times, he said, they picked up stuff they couldn’t explain.

So that keeps them going — even though people might refer to them as “whack jobs,” he said.

“That’s why we don’t do stuff the way people used to do it,” and try to gather as much scientific data as possible, Joeckel said.

The group also includes people of different religious backgrounds, he said, who will meet for several days after their investigation, examine the data and try to reach a conclusion.

“If we can expose or bring the truth to life after death,” Joeckel said, “it might make people who are dying not as scared if they know there’s something on the other side for sure.”